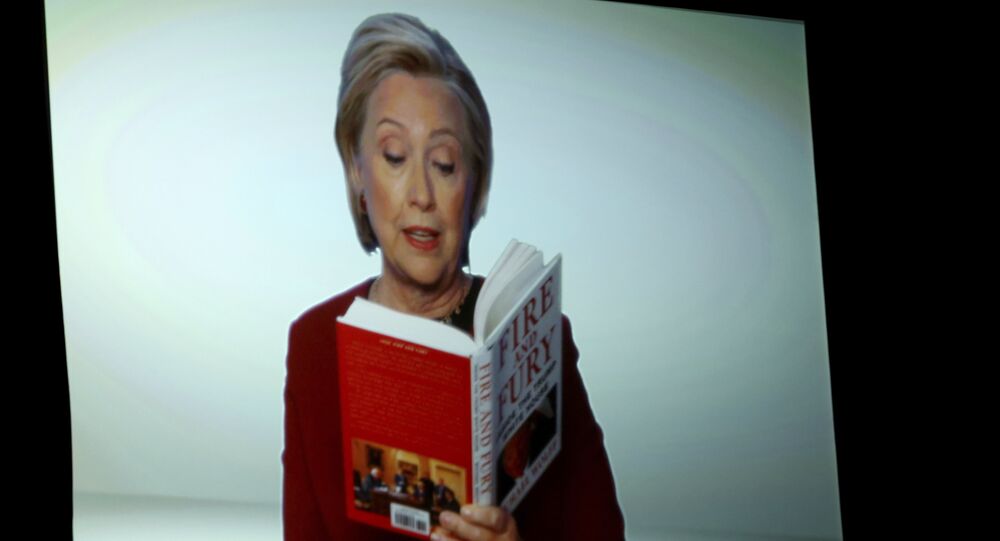 The former Secretary of State and Donald Trump’s nemesis has been put back in the spotlight again since she became part of the music awards show.

Hillary Clinton was a surprise guest in a sketch by host James Corden who pretended to be auditioning famous people, including Cher, John Legend, Snoop Dogg, DJ Khaled,  for the spoken word recording of Michael Wolff’s tell-all book “Fire and Fury: Inside the Trump White House.”

Clinton, who already has her own Grammy from 1997 for reading her book “It Takes a Village,” seemed to be very excited to take a jab at her rival. At first, she appears on screen with her face covered by the book, and then she lowers it to reveal her identity, reading one of the most explosive lines about Trump’s fear of being poisoned.

"He had a longtime fear of being poisoned. One reason why he liked to eat at McDonalds. No one knew he was coming and the food was safely pre-made."

On the hunt for a GRAMMY Award of his own, James Corden auditions celebrities for the spoken word version of Michael Wolff's "Fire and Fury." pic.twitter.com/SjTobAbv2N

As for netizens, Twitter went berserk over the unexpected move, with some showing their support for Hillary, and saying that it was the best part of the show:

And suggested other people that could take part in the audition…

"Why was I not invited!
SO NOT FAIR!" pic.twitter.com/eI0LJ1rDxN

…imagined how Trump is going to react to the show in the morning:

Trump is getting ready to tweet up a storm about Hillary on the Grammy’s tonight… #fireandfurybook #GRAMMYs trump #HillaryClinton #DumpTrump pic.twitter.com/wLgKCVinqY

But not everyone enjoyed the exciting moment, and Nikki Haley, United Nations Ambassador, was among those who took to Twitter to express discontent.

I have always loved the Grammys but to have artists read the Fire and Fury book killed it. Don’t ruin great music with trash. Some of us love music without the politics thrown in it.

Some shared her point of view, saying that they were sick of politics and didn’t like the skit:

This ruined it for me, especially Hillary's turn. Why is everything politically motivated. It's an awards show for music, not political views.

Hillary Clinton appearing at the Grammy’s to read an excerpt from Fire and Fury was almost as pathetic as her embarrassing loss to PRESIDENT Trump.

Michael Wolff’s best-seller made headlines a month ago for ostensibly exposing bombshell facts about President Trump’s first year in office. Trump has branded the book “fiction” and the author a “fraud.” Wolff cast doubt on the president’s mental health and fitness to serve as the country’s leader.  Earlier in January, Trump announced that his administration would examine thoroughly the country’s libel laws and toughen them if deemed necessary.