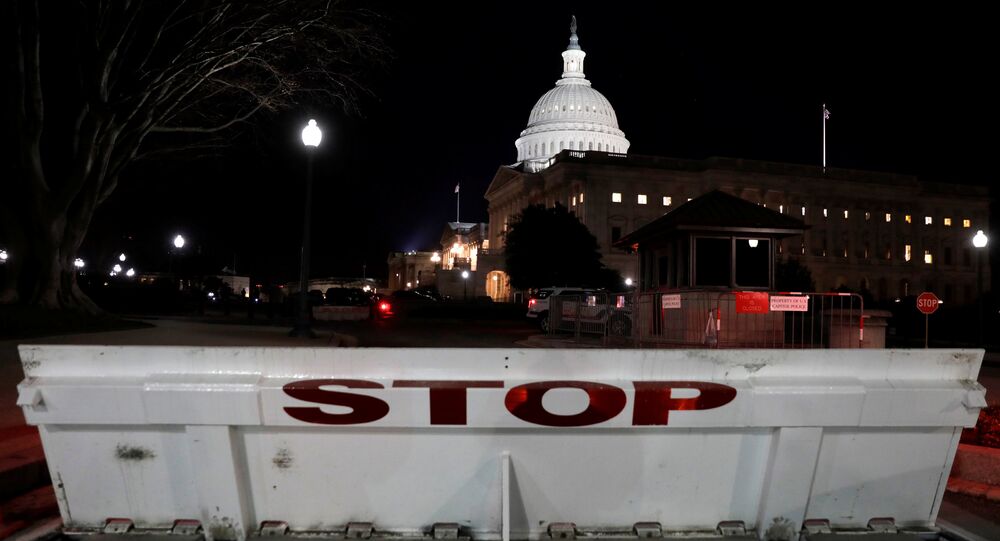 Senate majority leader Mitch McConnell is set to re-open funding negotiations in the upper chamber Monday, seeking to end the shutdown, which is hurting the military, as well as fiscal and foreign policy goals.

Kristian Rouz — Senate Majority Leader Mitch McConnell says he will hold a funding vote in the GOP-controlled upper chamber early on Monday, aimed at ending the government shutdown. The shutdown kicked in Saturday, after Senate Republicans and Democrats failed to secure a budget or a short-term funding deal over the matter of illegal immigration.

"I would invite all of my colleagues across the aisle to join together and do what is obviously responsible," Sen. McConnell said in the Senate Saturday, after the chamber assembled to discuss the first day of the shutdown. "Let's resume the bipartisan discussion on funding, our troops, DACA, on government spending and all of the other priorities that all of us can work together to resolve."

The issue of Obama-era DACA program, or Deferred Action for Childhood Arrivals, has been the main point of discussion in Congress for months. Whilst Democrats insist the almost 800,000 illegal aliens, who came to the US as children, must be allowed to stay in the country, GOP lawmakers have stiffly opposed the idea.

They are concerned that a deal allowing this group of illegal aliens to remain in the US would bring in at least an additional 1 million migrants as part of family reunification. Additionally, USA Today recently estimated a DACA amnesty would actually provide legal immigration status to at least 3.6 million illegals — a number far greater than the 800,000 people the Democrats insist it is.

Sen. McConnell has called on the Democrats to adopt a provisional three-week funding bill to keep the federal government running until 8 February. Currently, several hundred thousand government employees were sent home without pay until Congress settles the matter. Additionally, the shutdown affects military funding, which threatens US national security.

As the "blame game" has begun — with Democrats blaming President Trump and the GOP for the shutdown — the Senate majority leader said that the Senate minority is trying to use the shutdown for political gain. This comes ahead of midterm elections later this year.

"Low-income families across America woke up today without the knowledge that their children's health care is safe, all because the Democratic leader filibustered a bipartisan compromise that a majority of senators supported and chose instead a government shutdown," Sen. McConnell said.

Meanwhile, President Trump was set to travel to the elite Davos forum to discuss a US economic comeback with other global leaders — the trip, however, was put into question due to the government shutdown. In his absence, congressional Republicans won't be able to resume government funding, as any funding deal would need to be signed by the president.

The president's budget director Mick Mulvaney said President Trump has already canceled his weekend trip to Florida because of the absence of government funding.

"The president will not be going to Florida now and we're taking Davos, both from the president's perspective and the Cabinet perspective, on a day by day basis," Mulvaney said.

Observers say the Democrats are holding hostage not only military pay, the annual budget, and the issue of border security, but also US foreign policy — over the matter of keeping illegal aliens in the country. Some point to the powerful Central American lobbies in Washington as keeping pressure on their Democrat connections.

"Democrats politically benefit from these poor, unskilled, and government-dependent residents. Many will become future Democrat voters because they want and need taxpayer-provided benefits," wrote Gayle Finkbeiner of CentralMaine.com. "They are assisted by such racially conscious ethnic lobbies like the National Council of La Raza and some non-profit organizations, which rake in millions of federal tax dollars."

Another organization actively advocating for the illegal aliens in D.C. is the League of United Latin American Citizens (LULAC). Over half-a-million of the DACA illegals hail from Mexico, the vast majority of the rest comes from Central America.

"We cannot wait any longer. Millions and millions of families across the country are continuously living in fear," LULAC's Abigail Zapote — indirectly supporting the viewpoint that there are more than 800,000 illegals in question.

Meanwhile, the White House made it clear the Democrats will have to abandon their approach to negotiations.

"The president will not negotiate on immigration reform until Democrats stop playing games and reopen the government," spokeswoman for the Trump administration Sarah Huckabee Sanders said in a statement.

House Republicans support the planned re-opening of negotiations in the Senate — suggesting the government shutdown has good chances to end this coming week.