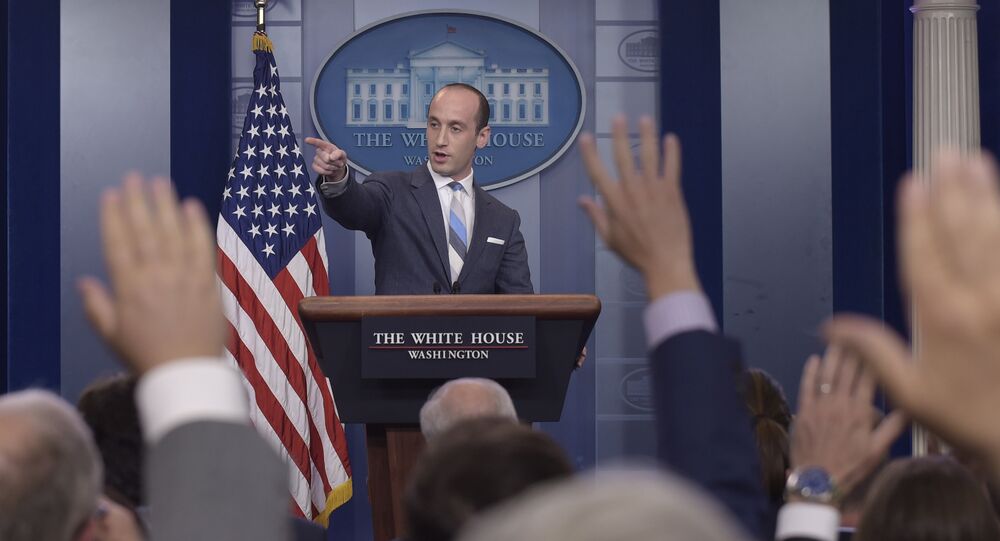 The US probe into the Russia's alleged meddling in the 2016 US presidential election is underway: the investigators are trying to dig down into Comey's resignation.

WASHINGTON (Sputnik) — Special Counsel Robert Mueller has questioned US President Donald Trump's senior adviser Stephen Miller on his role in the firing of FBI Director James Comey, CNN reported citing its sources. The broadcaster has revealed that the investigators are questioning Miller about the memo, which was drafted in Bedminster, N.J., at Trump's golf club.

The New York Times reported that it was Miller who helped Trump write that memo, outlining reasons why the president wanted to fire former FBI Director James Comey in May. But it has never been used, as White House counsel Don McGahn pushed back because the content of the memo was allegedly concerning.

The Justice Department reportedly provided a copy of the document to Mueller, and its contents were akin to the one written by Deputy Attorney General Rod Rosenstein that lead to Comey's dismissal, according to a CNN source.

In his article published immediately after the election, Tim Fernholz of Quartz surmised that the announcement was related to Hillary Clinton's email scandal made by the then-FBI director just 11 days before the presidential vote which dealt a heavy blow to her presidential campaign.

Clinton has repeatedly blamed Comey for her defeat, saying that he had changed history. Trump's response to this message was to tell Hillary to stop blaming everyone for her loss.

Miller's interrogation is also connected with the fact that he was present at a March 2016 meeting where George Papadopoulos, at that time a foreign policy adviser to the Trump campaign, said he could allegedly coordinate a meeting with Trump and Russian President Vladimir Putin. According to the media outlet, Miller is the highest-level official in the White House known to have talked to investigators and kept his job.

Papadopoulos had "an extremely limited role" in the Trump presidential campaign, according to White House. In his testimony, he told the FBI that he had been in contact with an unnamed London-based "professor," who had allegedly claimed to have damaging information on then-Democratic presidential candidate Hillary Clinton before he had joined Trump's campaign team, while the communications had occurred afterward, according to the Special Counsel Robert Mueller's office.

Information about Papadopoulos, who was slammed by Trump as a "liar" pleading guilty came the same day when former Trump campaign manager Paul Manafort and his business associate Rick Gates were charged on 12 counts, including "conspiracy against the US" and "conspiracy to launder money.