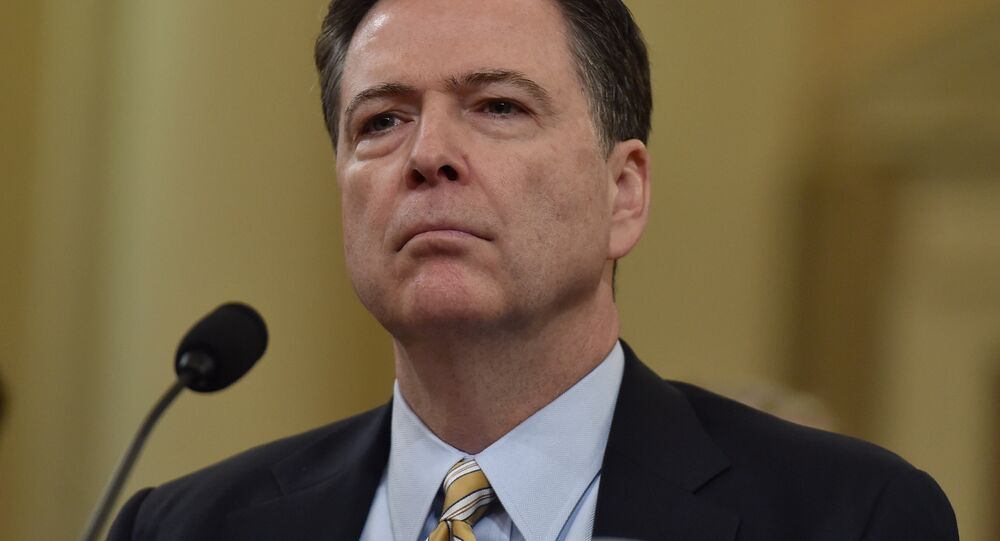 Although the US 2016 presidential campaign ended almost 10 months ago, former Democratic presidential hopeful Hillary Clinton continues to look for someone to blame for her resound defeat on November 8, 2016. It appears that eventually she has figured out who "forever changed history" last year.

"I think it's important to focus on what happened, cause lessons can be learned," Clinton told Anderson Cooper, the host of "Anderson Cooper 360," on Wednesday commenting on her newly published book with the eloquent title "What Happened."

Clinton has long been blaming Comey for her defeat, but it is the first time that she has emphasized the former FBI director's role in the whole story in such terms.
However, Hillary Clinton's main rival, the incumbent president of the United States, Donald Trump, swiftly responded.

Crooked Hillary Clinton blames everybody (and every thing) but herself for her election loss. She lost the debates and lost her direction!

The "deplorables" came back to haunt Hillary.They expressed their feelings loud and clear. She spent big money but, in the end, had no game!

Clinton's accusations toward James Comey are not that groundless: In his article published immediately after the elections Tim Fernholz of Quartz surmised that the announcement related to Hillary Clinton's email scandal made by the then-FBI director just 11 days before the presidential vote dealt a heavy blow to her presidential campaign.

© AP Photo / Andrew Harnik
Comey Primed to Exonerate Hillary Clinton Before FBI Investigation Was Even Over
Although Comey recommended in July 2016 that no criminal charges be filed against Clinton for her use of an unprotected email server, on October 28, 2016, he sent a letter to Congress writing about the disclosure of a portion of Clinton emails, which were likely sent or received by former Congressman Anthony Weiner's wife, Huma Abedin, Clinton's personal aide.

The discovery came like a bolt out of the blue, resuming a heated debate in the media over Clinton's use of her private email server, as well as her chances to be charged for the misdeed. On November 6, 2016, Comey said in an official statement that a new batch of emails from Clinton's private server "have not changed [the FBI's] conclusion;" nevertheless, the damage was done.

While delivering her speech at a Women for Women International event in New York in May 2017 Hillary Clinton recollected the embarrassing episode and partly blamed Comey for the fiasco.

"If the election had been on October 27, I would be your president," Clinton told Christiane Amanpour, the moderator of the event. Clinton's phrase prompted an immediate response from Trump.

On Tuesday, Hillary Clinton's memoir "What Happened" came out. The book has prompted a lively debate on US mainstream media outlets with some reporters recommending the opus and others denouncing it as "dead-horse-beating." Many journalists, regardless of their political preferences, came to the conclusion that regardless of why Hillary Clinton lost the election it's time for her to move on.