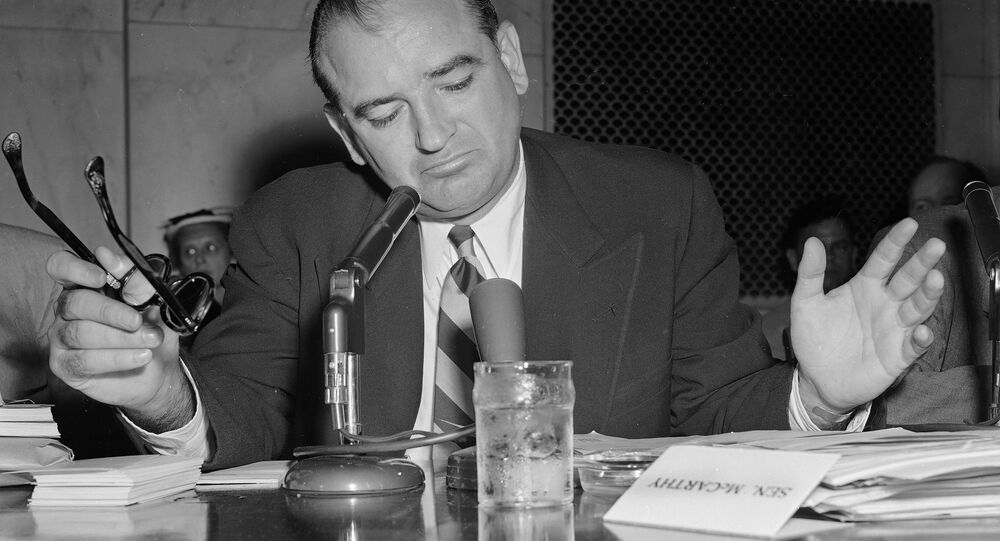 Seventy years ago, the House Un-American Activities Committee (HUAC) began investigating claims of communist infiltration of the film industry. Dr. Frank Krutnik, an expert on the era, has told Sputnik about the environment that gave rise to the hearings - and their relevance to today's sociopolitical milieu.

October 20 marked the 70th anniversary of the beginning of the House Un-American Activities Committee's (HUAC) investigation of alleged communist influence in Hollywood.

​​The hearings, which ran for nine days, focused on determining the extent of communist propaganda and influence in Hollywood, and identifying political subversives among actors, writers, and directors. By their end, hundreds of film heavyweights had been blacklisted from the industry, including Charlie Chaplin and Orson Welles.

A mere 10 percent of those affected by the HUAC's purge successfully rebuilt their careers within the entertainment industry subsequently.

Speaking to Sputnik about the investigation seven decades later, Dr. Frank Krutnik, author of 'Un-American' Hollywood: Politics and Film in the Blacklist Era, explains the presence of communists in Hollywood was very real — although their motives were far from malign.

"The Great Depression demonstrated the failure of the US capitalist economic system and its free enterprize ethos, which had a radicalizing impact on many intellectuals. People began searching for an alternative for a system that clearly wasn't working. Moreover, the Communist Party was one of the few American political groupings that actively took a stand against fascism and Nazism," Dr. Krutnik told Sputnik.

Several US cities — in particular New York — became hotbeds of radical thought, according to Dr. Krutnik, and many individuals within that milieu went on to become screenwriters in Hollywood. He said they had a "genuine belief" that movies could be used as a platform to offer an alternative vision of the US.

"Their opponents at the time, and the HUAC subsequently, saw US communists as being in thrall to a foreign power, but really many were actually just liberal leading, and weren't out to destroy the US system by any means — they simply sought to implant progressive ideas in popular films," Dr. Krutnik said.

With the eruption of World War II, and the US and Soviet Union coming together as allies, US films actively embraced Russia — in fact, many pro-Soviet movies from the era, such as Mission to Moscow, The North Star, and Song of Russia, were made at the request of White House officials, to support the Allied war effort.

"Of course, after the war, the climate changed. The Greek Civil War saw the introduction of the Truman Doctrine, aimed at communist containment, and there was the Chinese revolution that swept communists to power," Dr. Krutnik explained.

​The left was subsequently targeted by authorities at every level of US society, and Hollywood, with its immense power to shape imaginations and perspectives, loomed large in the crosshairs. Dr. Krutnik added, factions within Hollywood began to take an active stand "against propagandist elements" within movies.

"It was certainly a witch-hunt — the very people who were encouraged to preach an alternative vision became targets. Ironically though, the HUAC could never find subversive messages in films, because they weren't good film critics. For instance, the Committee were very suspicious of the 1946 film It's A Wonderful Life because its villain was a banker. They operated on the general assumption that if left-wingers were working in a field, it was polluted," Dr. Krutnik continued.

Dalton Trumbo was one of the individuals targeted by the HUAC — his experiences were immortalized in an eponymous 2015 movie, Trumbo.

In his defense, he branded the hearings as illegal, and stated questions about his political loyalties were inappropriate — the famed screenwriter argued belonging to the Communist Party did not constitute a crime, and the First Amendment guaranteed his right to privacy, silence, freedom of speech and thought. His arguments were echoed by fellow screenwriter John Howard Lawson.

However, these arguments were ignored, on the basis mere connection with a particular movement or group was somehow "unhealthy and unsavory," Dr. Krutnik said, and the film studies expert sees many parallels between the HUAC's "paranoid defensiveness" of a "specific version" of American democracy and the climate of the present day.

"The Patriot Act created a climate of fear in the US, creating an 'if you're not with us, you're against us' narrative — that sort of racially-based xenophobia has intensified under Trump, and today left liberals in retreat. There's a similar climate of paranoia, persecution and uncertainty, a sense US democratic values are in crisis. No matter how defined values are articulated, there's no way some people can win," he concluded.