October 20 marks the 70th anniversary of the beginning of the House Un-American Activities Committee's (HUAC) investigation of alleged communism influence in Hollywood. By the end of the inquiry, hundreds of film heavyweights would be blacklisted from the industry forevermore.

On October 20 in 1947, US House Un-American Activities Committee opened an investigation into communist infiltration of the American movie industry, chaired by Congressman Parnell Thomas.

​The subsequent hearings focused on determining the extent of communist propaganda and influence in Hollywood, and identifying political subversives among actors, writers, and directors. 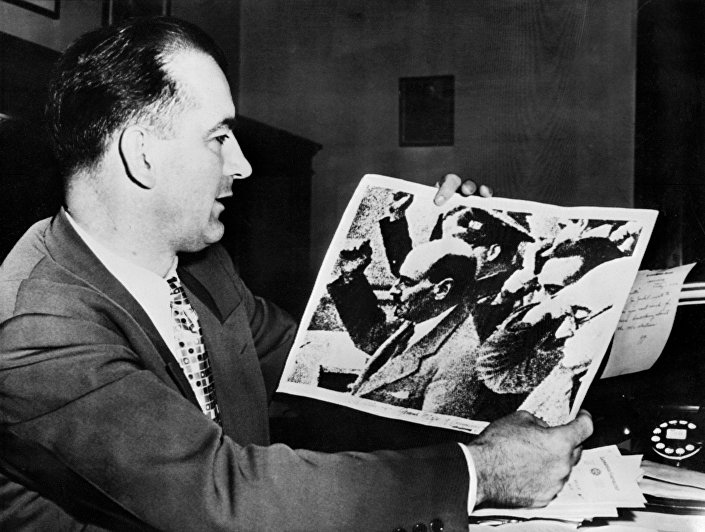 Although initially opposed by Hollywood heavyweights such as Humphrey Bogart and Gene Kelly, the hearings proceeded, commencing October 20 in 1947, and ending nine days later.

Under questioning, studio executives involved in WW2-era movies such as Mission to Moscow, The North Star, and Song of Russia, conceded that the films could be considered pro-Soviet, but argued pictures were valuable in the context of the Allied war effort — and had in fact been made at the request of White House officials.

However, other witnesses, including studio titans Walt Disney and Jack Warner, gave statements condemning the "communist influence" that allegedly infected the US film industry. Some specifically named individuals who they suspected of harboring communist affiliations or sympathies.

Based on this information, the HUAC subpoenaed 79 individuals on the basis they might be subversive and had injected communist propaganda into films they had written, produced, directed or starred in. The intention was to interrogate the subjects on their membership of the Screen Writers Guild and Communist Party, and compel them to name names of other Communists.

Nevertheless, of those subpoenaed, 19 refused to cooperate, and due to illnesses, scheduling conflicts, and exhaustion from the chaotic hearings, only 10 appeared before the Committee. These men became known as the "Hollywood Ten."

Dalton Trumbo, whose experiences at the committee were immortalized in an eponymous 2015 movie, decried the hearings as illegal, and stated questions about his political loyalties were inappropriate.

In particular, the famed screenwriter argued belonging to the Communist Party did not constitute a crime, and the First Amendment guaranteed his right to privacy, silence, freedom of speech and thought.

'Have You Ever Been a Member of the Communist Party?'

His arguments were echoed by fellow screenwriter John Howard Lawson, under questioning by HUAC Thomas.

Lawson: It's unfortunate and tragic that I have to teach this committee the basic principles of Americanism.

Lawson: I am framing my answer in the only way in which any American citizen can frame his answer to…

Thomas: Then you deny it?

Lawson: …a question that invades his… absolutely invades his privacy.

Thomas: Then you deny… You refuse to answer that question, is that correct?

Lawson: I have told you that I will offer my beliefs, my affiliations and everything else to the American public and they will know where I stand as they do from what I have written.

Thomas: Stand away from the stand…

Lawson: I have written for Americanism for many years …

Thomas: Stand away from the stand …

Lawson: And I shall continue to fight for the Bill of Rights, which you are trying to destroy.

Thomas: Officer, take this man away from the stand.

Trumbo, Lawson and their fellow screenwriters Alvah Bessie, Lester Cole, Ring Lardner, John Howard Lawson, Albert Maltz and Samuel Ornitz, and directors Herbert Biberman and Edward Dmytryk (the "Hollywood Ten"), would eventually be convicted of Contempt of Congress for refusing to answer questions, and subsequently jailed and ostracized by the industry.

The fate of the "Hollywood Ten" terrified the film industry, and studios were quick to produce a number of rabidly anti-communist, anti-Soviet propaganda films such as The Red Menace (August 1949), The Red Danube (October 1949), I Married A Communist (October 1949), I Was a Communist for the FBI (May 1951) Red Planet Mars (May 1952), and Big Jim McLain (August 1952). Universal-International Pictures was the only major studio that did not produce such output.

Moreover, when new HUAC hearings began in 1951 and continued to probe communist influence in Hollywood, the industry quickly buckled to the committee's demands. Over 300 artists — including directors, radio commentators, actors and screenwriters — would be placed on a "blacklist," effectively banning them from employment in films.

19Sept/1952: Charles Chaplin is crossing to UK when he learns he's suspected by HUAC of being a Communist https://t.co/RsDElhfEts

​Some, including Charlie Chaplin, Orson Welles, Paul Robeson and Yip Harburg, left the U or went underground to find work, while others wrote under pseudonyms or the names of colleagues. Still, a mere 10 percent of those affected by the HUAC's assault on Hollywood successfully rebuilt their careers within the entertainment industry subsequently.