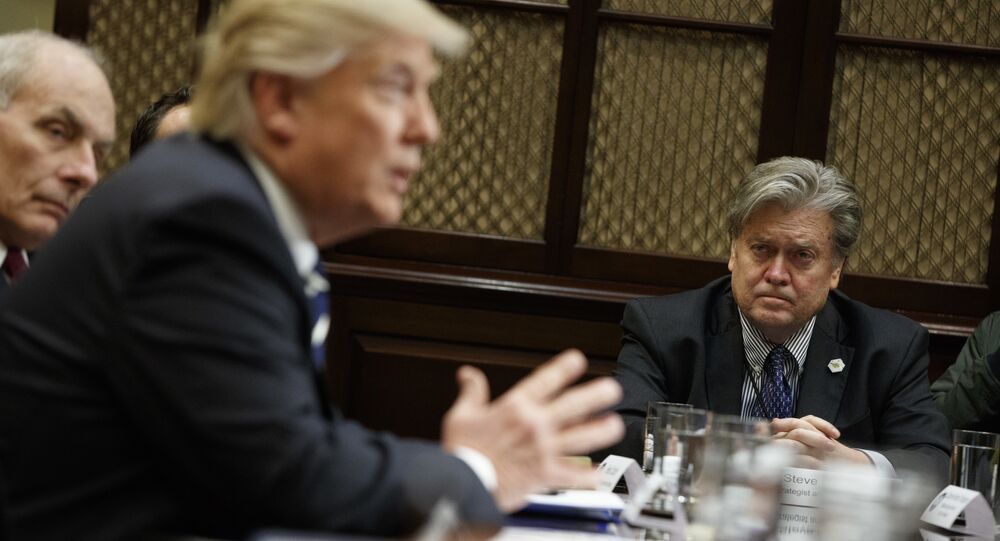 Steve Bannon has been ousted from his role in US President Donald Trump’s White House, but rather than a fall from grace, expect a renewed passion for the fight from the very-recently-ex chief strategist, says Sputnik Radio host Lee Stranahan.

"I have three words," Stranahan said via Periscope Friday morning. "Unleash the beast."

Bannon came under scrutiny following an interview published this week. Speaking frankly with the American Prospect’s Robert Kuttner, Bannon commented breezily on the lack of a US military option in North Korea, economic war with China, his efforts to purge adversaries at the departments of state and defense and get “hawks in” and about how a Democratic Party obsessed with race and identity could be crushed.

Beijing is "crushing" the US in an "economic war," he said. The once and future Breitbart executive made his top priority crystal clear. "To me, the economic war with China is everything," he said, making no bones about the fact that he believed the Trump administration should be "maniacally" consumed with winning the battle over dollars and cents with Washington’s second-largest trading partner in the world after the EU.

Specifically, the former US Navy sailor and ex-Goldman Sachs banker worries that "one of us is going to be a hegemon in 25 or 30 years and it’s gonna be them if we go down this path."

"There’s no military solution [in North Korea], they got us," Bannon said. But he reasoned in the interview that since North Korea presents a threat to northeast Asia and the US, China’s reduced support for Pyongyang wouldn’t be disrupted by antagonistic economic measures toward Beijing that Bannon championed.

Bannon’s comments sparked outrage among many, including famed neocon Bill Kristol, who tweeted on Wednesday, "Bannon’s defeatist comments on N[orth] Korea undermined the foreign policy of the US government. He’ll be fired tomorrow."

Bannon leaves as the first and only "chief strategist" in White House history: the Trump administration created the role for him. It’s unclear who will succeed Bannon in the position or whether it’s a role the White House intends to fill.

Bannon’s exit could impact how Trump’s base view the president, Stranahan says. "I agree with Trump about 75 per cent of the time," he said Friday on Fault Lines. "That number could go down in the future — it’s possible — with Steve being gone," Stranahan said.

Bizarrely, Bannon’s departure is being described as both having been set in motion in the first week of August, when he supposedly freely submitted his resignation, as well as, Fault Lines co-host Garland Nixon suggested, having been orchestrated by newly minted White House Chief of Staff and retired Marine Corps Gen. John F. Kelly.

​According to Stranahan, Bannon had been contemplating whether to remain within the Trump administration for weeks. Regarding allegations that Bannon’s interview with the American Prospect was the final straw in his exit, Stranahan observed that Bannon "didn’t have anything to lose."

That doesn’t mean Trump’s former counsellor intends to trash his erstwhile employer. "Bannon’s plan," now that he is a private citizen, "is not to trash the president," Stranahan said. Bannon has returned to Breitbart as executive chairman.

The American Prospect’s Robert Kuttner described Bannon as "probably the most media-savvy person in America," while Mediate ranked the political activist 19 on its list of the "25 Most Influential in Political News Media 2015."

"He’s literally unleashed. He’s not been in the media for about a year now," since Bannon formally joined the Trump campaign, Stranahan said.

"Bannon’s out. Every microphone in America, right now, is on a truck chasing Steve Bannon," said Nixon, board member of the American Civil Liberties Union. "Right now if you saw Steve Bannon driving around the Beltway you would see a line of satellite trucks speeding behind him with guys hanging out the window, sticking a microphone in the window” toward Bannon’s vehicle "trying to get a comment."

"So he’s going to have the opportunity — all he wants to — to say whatever he wants, because the microphones will be chasing him around," self-described die-hard Bernie Sanders supporter Nixon noted.

Stranahan observed Friday that Bannon’s exit may coincide with a soon-to-be-announced troop surge in Afghanistan. Bannon and Stranahan have argued that Trump’s base wants no part of a renewed war effort in the Middle East, contrary to the alleged hopes of National Security Adviser H.R. McMaster.

Bannon: ‘Corporatist, Globalist’ Media Won’t Give Nation Back Without Fight