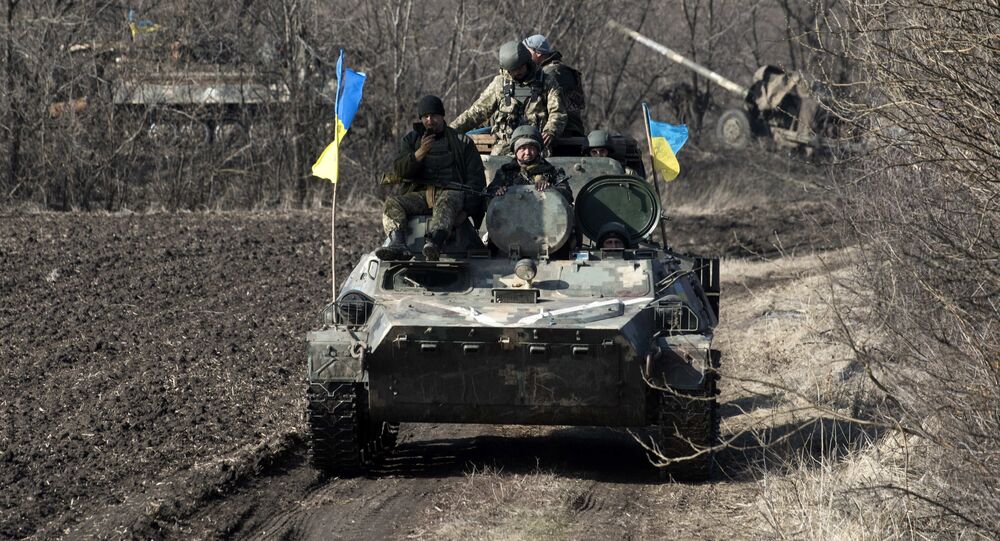 The United States remains "strongly supportive" to building the capacity of Ukraine's armed forces, the Pentagon spokesperson announced on Wednesday.

"Work emphasized that the U.S. remains strongly supportive of Ukraine's sovereignty and territorial integrity and to building the capacity of Ukraine's forces. Additionally, he encouraged Ukraine to remain committed to the implementation of reforms, which will make their defense enterprise more effective and efficient," the Wednesday statement says.

According to the Pentagon, Klimkin reaffirmed Ukraine’s commitment to the implementation of the Minsk peace deal during the meeting with Work.

"Klimkin underscored the importance of U.S. support for Ukraine's right to decide its own foreign policy course," Hillson said in the Wednesday statement.

© AFP 2020 / PAUL J. RICHARDS
Trump Expects Russia to 'Return Crimea' to Ukraine - White House
Earlier this month, US Senate Armed Services Committee Chairman John McCain sent a letter to US President Donald Trump urging him to use the powers and funding Congress granted him to provide the means for Ukraine to defend itself against alleged Russian attacks and the prospect of future aggression.

The Senator strongly suggested that Trump should exercise the authority given to him by the 2017 National Defense Authorization Act to provide defensive lethal assistance to Ukraine.

McCain later told Sputnik that the weapons he had in mind included Javelin anti-tank missiles, anti-battery radar and armored vehicles.

The crisis in Ukraine sparked after West-sponsored Maidan coup in Kiev had toppled legitimate President Viktor Yanukovych in February.

As conflict began relations between Russia and the European Union and the United States, deteriorated amid the crisis in Ukraine.