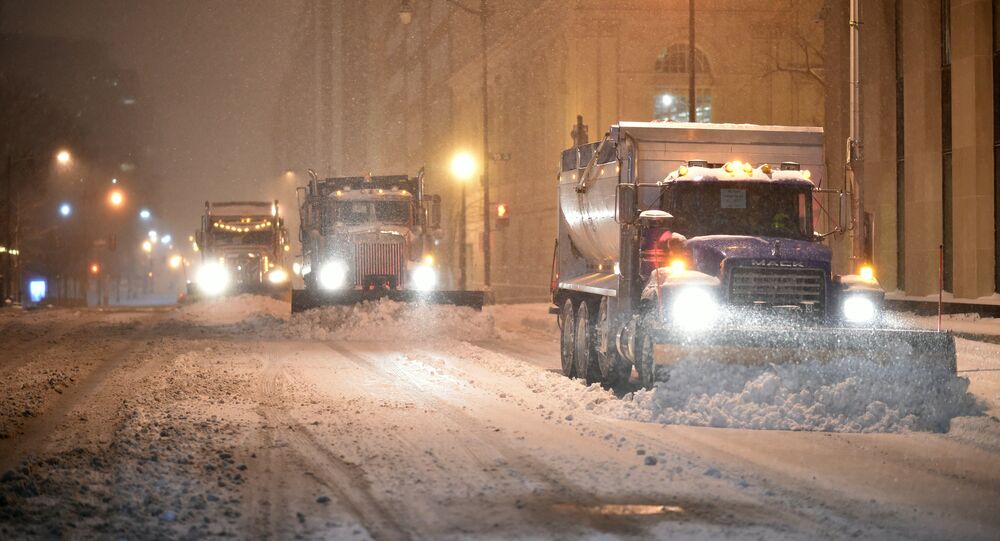 Snowstorms throughout the Rocky Mountain states as well as Alaska have destroyed hundreds of the region’s weaker buildings and led to at least one death.

Idaho governor C. L. Otter has signed an emergency declaration for Washington County, where over a hundred buildings have been crushed under the weight of recent snows. A Washington County man broke his leg and hip after a carport collapsed. Elsewhere in the state, a woman's porch fell, crushing her to death.

Joe's Club in Payette completely collapsed due to snow pile-up on the roof. One of several collapsed buildings I've seen in this area today pic.twitter.com/DErElEz1HJ

​Weiser, a small city in Idaho, saw its only grocery store, Ridley's Family Market, lose two-thirds of its roof. Weiser Memorial Hospital granted store-owner Mark Ridley the use one of their administrative buildings as an emergency retail facility while the roof is repaired.

​Dell Winegar, president of the Idaho Onion Growers Association, said that nearly 20 farm buildings have been damaged in Idaho and Oregon. Onion prices have spiked 86 percent in the region.

​"It's been a heartbreak for a lot of folks," Winegar told the Seattle Times. "It's hard to prepare for something that has never happened before."

​Other Idaho farmers, including organic-produce grower Tim Sommer of Middleton, and vineyard manager Dale Jeffers of Sunnyslope, have reported severe damage to their crops.

​The most famous structure to be damaged is the 180,000-square-foot sports center in Anchorage, Alaska, known as The Dome. The gigantic building proclaims itself to be the world's largest structure supported by pressurized air.

Even after the weekend snow dump — the biggest in years — Anchorage still isn't up to seasonal snow average https://t.co/7Uexmb50ot pic.twitter.com/j3odyqq922

​The high-tech pressurization system did not protect The Dome from a roof collapse.

The roof of The Dome in Anchorage completely collapsed Saturday night. Management says it was due to heavy snow. https://t.co/ucUez0HifL pic.twitter.com/u1qmUNCHd4

​In Bend, Oregon, a storage facility for campers and motorhomes, as well as the gymnasium of a local elementary school, saw roof collapses. No injuries were reported in either incident. Portland General Electric has reported that 63,000 Oregonians have been affected by power outages.

​A Rocky Mountain ski resort in Breckenridge, Colorado, saw its conference room collapse. Nobody was injured, but several buildings have been evacuated as a precautionary measure. Overall damage in Colorado has been minimized due to strict building codes.

A couple of foxes took a break from all the snow in Breckenridge, Colorado, with a nap atop a man's roof Sunday morning. ❤️ pic.twitter.com/evVJftkipt

​Experts say the heavy snow accumulation is a result of both increased precipitation at lower-than-usual elevations, and prolonged cold temperatures which have prevented past snows from melting. In addition, frequent snowfalls make it difficult to clear the roofs.

Here's another reason I-84 Troutdale-Hood River is closed — it's impossible to navigate safely. Snow sliding over walls, onto road, too. pic.twitter.com/0CZvuYQ9n4

​Ron Abramovich, with the Idaho Snow Survey, says that another problem is people underestimating the stress on their rooftops. "They may look at the roof and say, 'There's not as much snow there because it settled,'" he told the Seattle Times. "But it really comes down to the amount of water in the snowpack."

​High-density settled snow can be deceptively thin but weigh thousands of pounds.

Some 60 Flights Canceled in Japan Due to Heavy Snow