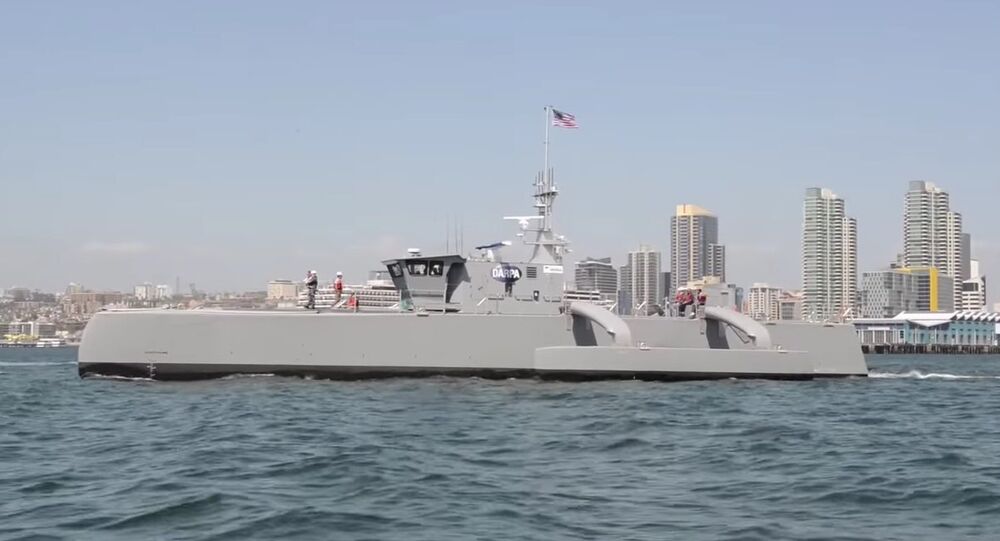 The US navy is expanding the mission capabilities of its experimental submarine-hunting drone ship so that it can engage in surface warfare missions, fire weapons and launch electronic attacks.

“The 40-meter-long self-propelled warship, dubbed Sea Hunter, is a major advance in robotic warfare at the core of America's strategy to counter Chinese and Russian naval investments,” Kris Osborne wrote in the latest issue of Scout Warrior.

“It is designed to cruise on the ocean’s surface for two or three months at a time,” he added.

© Flickr / UK Ministry of Defence
US Navy’s Submarine-Hunting Ship Will Also Launch Surface Warfare Missions
According to the Sea Hunter’s designers, the project was the Navy’s answer to the emergence of anaerobic submarine engines that are exceptionally silent. Diesel submarines powered by such engines can stay underwater for months and pose a serious threat to US carrier groups.

A diesel-powered Sea Hunter will be able to stalk Russian and Chinese subs for 10,000 nautical miles on a single tank of fuel at a speed of up to 27 knots.

At 40 meters long and just 3.3 meters wide, the 135-ton Sea Hunter can also be used to ensure the security of US carrier groups.

Built to withstand rough seas up to Sea State 5 – or waves up to five meters, the Sea Hunter carries an array of advanced hydro-acoustic gear to ensure unmanned navigation to shadow enemy submarines and force them to stay clear of strategically vital areas.

The Sea Hunter’s state-of-the-art sensors and sonar technology ensure effective search for and continuous tracking of even the quietest submarine targets.

Its high-frequency sonar can determine the shape, size, speed and characteristics of any undersea enemy activity by sending acoustic “pings” into the ocean.

The Sea Hunter will perform patrols in tandem with P-8 Poseidon antisubmarine warfare planes, MQ-4C Triton drones and special hydro-acoustic buoys.
The Sea Hunter can be controlled by a human “tele-operator” maneuvering the ship with the help of a joystick.

As technology evolves, the Navy plan is to rapidly migrate the system from something which is tele-operated to something that can increasingly perform a wider range of functions without needing human intervention.

“We need to be able to have a more autonomous system that can steer and reposition itself,” Capt. Jon Rucker, program manager, Unmanned Maritime Systems, PEO LCS, told reporters on January 10 at the Surface Naval Association at Arlington, Virginia.

“We are not yet at the point where we don’t have an operator supervising it,” Rucker added.

In his article in Scout Warrior, Kris Osborne wrote that “if the Sea Hunter is both more autonomous and armed with lethal weapons in the future, it will be engineered to align with current Pentagon doctrine which says any use of lethal force must hinge upon a human decision-maker in the role of command and control.”

Rear Admiral Frank Drennan, commander of the Naval Mine and Anti-Submarine Warfare Command, said that picking up the quiet hum of a battery-powered, diesel-electric submarine in busy coastal waters is “like trying to identify the sound of a single car engine in the din of a major city.”

The ACTUV’s use of sonar is also designed to minimize risks to the marine ecosystems and undersea life such as whales.