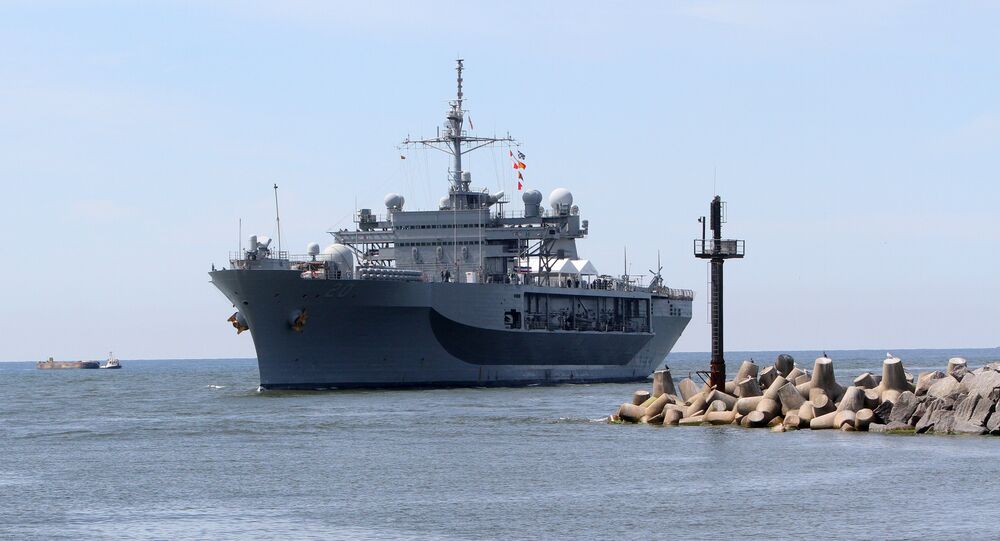 The length of time that US ships patrol the Black Sea could be extended from the current operating level of about four months, Navy staff director Vice Adm. James Foggo told Sputnik at the Defense Forum in Washington, DC.

The US is thus sending a message to Europe that it could augment its naval presence in the Black Sea. The negative impact of this decision is hard to miss as most Europeans believe that America has done a poor job as a world leader since the 1991 Soviet breakup.

© AP Photo / Arun Sankar K.
US ‘Dramatically’ Increasing Naval Fleet Size, Maritime Presence
In keeping with the 1936 Montreux Convention, US naval ships cannot stay in the Black Sea more than 21 days, but it looks like the Pentagon could disregard these limitations.

NATO, meanwhile, is equally ready to contribute to this dangerous escalation. During their October 26-27 meeting in Brussels, the defense ministers of the 28 member —states disused measures to boost the alliance’s presence in the Black Sea region.

The US Sixth Fleet, headquartered in Naples is operationally organized into six task groups consisting of carrier ships, amphibious forces, landing forces, logistics forces and special operations units that are present in the Mediterranean for a period of 6 to 8 months.

The Sixth Fleet has at its heart a task force of one or two aircraft carriers, two missile cruisers, sixteen frigates and destroyers in addition to submarines, landing ships, Marine units and bases in Italy, Spain, France, Greece, Turkey and other European countries.

The Fleet’s area of responsibility includes the Mediterranean and Black Seas, part of the Atlantic Ocean and the coast of Africa (Gulf of Guinea).

The Sixth Fleet’s command and control ship, the USS Mount Whitney, bristles with the most sophisticated communications and surveillance equipment ensuring effective command of the Fleet’s Air Force and Marine units.

US naval ships with the Aegis integrated naval weapons system  on board are part of the US missile defense system and can weaken the impact of Russia’s retaliatory missile strike.

In addition, there is a number of Arleigh Burke-class destroyers armed with Tomahawk cruise missiles regularly patrolling waters off Russia’s Crimean peninsula.

© AFP 2020 / BULENT KILIC
Russia Hopes Montreux Convention on Turkish Straits to Remain Inviolable
Both the United States and NATO are seeking to expand their presence in the Black Sea following the 2014 reunification of Crimea with the Russian Federation, a move that NATO sees as a violation of international law. Moscow maintains the legitimacy of the 2014 Crimea’s popular referendum to rejoin Russia.

In a recent Sputnik.Polls survey, the majority of people in Germany (69%), France (55%) and Italy (51%) said that the United States did a poor job as the only superpower and global leader after the dissolution of the Soviet Union in 1991. The survey was conducted by Ifop for Sputnik News Agency and Radio.

When asked if the United States had succeeded as a global leader after the collapse of the Soviet Union, only 24% of Germans, 35% of French people and 42% of Italians gave a positive response. Some 10% of French and 7% of German and 7% of Italian respondents were uncertain about their answer.

US Naval Patrols in Black Sea Can Be Increased - Vice Admiral