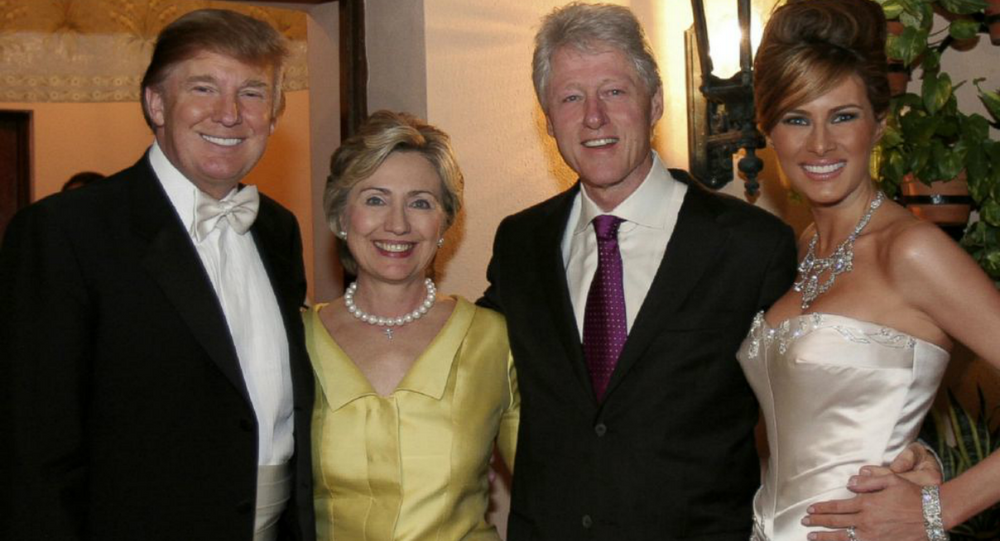 There can be no doubt in anybody’s mind that the Republican nominee has seized back control of his Twitter campaign and is no pursuing a scorched earth policy of laying bare before the eyes of the American public the crimes and misdeeds of the entire US establishment.

Only hours ahead of Sunday’s second presidential debate with his campaign for president in a tailspin as the media drives a narrative that the bombastic billionaire had described "sexual assault" and was a "predator" in the words of CNN pundits Van Jones and Gloria Borger, the Republican nominee lifted the veil of what the reality of sexual violence and intimidation looks like retweeting a video of Juanita Broaddrick, who alleges she was the victim of a brutal rape by Bill Clinton, reliving the experience.

​In an interview on the controversial Breitbart news outlet, Broaddrick went into detail about the fear that she has of a Clinton presidency in light of the horrific sexual assault that she recalls and the subsequent threats that Hillary Clinton lobbed against her in order to silence her all of those years ago.

"He grabbed me again very forcefully and started biting on my top lip and this was extremely painful. I thought he was going to bite my lip off. That was when he pushed me back onto the bed," she said.

"I need to stop," said Broaddrick bursting into tears. "It is still so painful. That I’m afraid of him. I’m still afraid especially if she becomes President and it is looking that way so it is frightening Aaron. It is frightening."

"I was completely dressed, had on a skirt and a blouse. He tore the waist of my skirt and then he ripped my pantyhose and then he raped me. It was very vicious,” said a crying Broaddrick. I was just pinned down… I did not know what to do. I was so frightened. I was only 35 at the time. And it was horrible. I just wanted it to be over with. So he would go away."

The alleged rape survivor went further in saying that he "held me down for a long time and then he did it again. I was so ready for him to leave me alone when he started raping me again."

After the assault she recalls that Clinton put on his sunglasses and went to the door leaving her crying inconsolably on the bed and he told her to “get some ice on that, on my lip.”

Media pundits have assailed the Trump campaign for bringing up Bill Clinton’s violence against women saying that Hillary should not be held accountable for the misdeeds of her husband – a reasonable position that has been hit back against by a number of leading journalists including Glenn Greenwald who explained that there is also concern about Hillary’s role in silencing victims.

At least four other women have accused Bill Clinton of forcefully raping them, groping them, or exposing himself to them without their consent in tangible acts of sexual violence far and above the very disconcerting statements by Trump suggesting the behavior by the former President was far from a one-off and was likely known by Hillary Clinton.

Two of the women, Broaddrick and Kathleen Willey allege that Hillary Clinton not only knew about the assault at the time, but threatened physical violence against the women should they disclose what had happened to them with investigators even following Willey around, flattening her tires, and threatening her leaving the alleged survivor saying that she feared for her life.

While the alleged attacks against women like Juanita Broaddrick are of a much more severe character than the nature of Trump’s offensive language speaking about “grabbing [women] by the p----,”there is also concern that his publicizing these accusations while potentially bringing these women justice at long last may be no more for the Republican than justifying one evil with an even more horrific one.

Despite the controversy that now surrounds Donald Trump after his salacious comments that were released on Friday regarding women, the candidate has vowed not to drop out of the race and waged war on "GOP traitors" and Republican ‘leadership’ in a flurry of Tweets Sunday morning as the establishment calls on him to step out of the race warning that if they do not back him they will lose their own race.