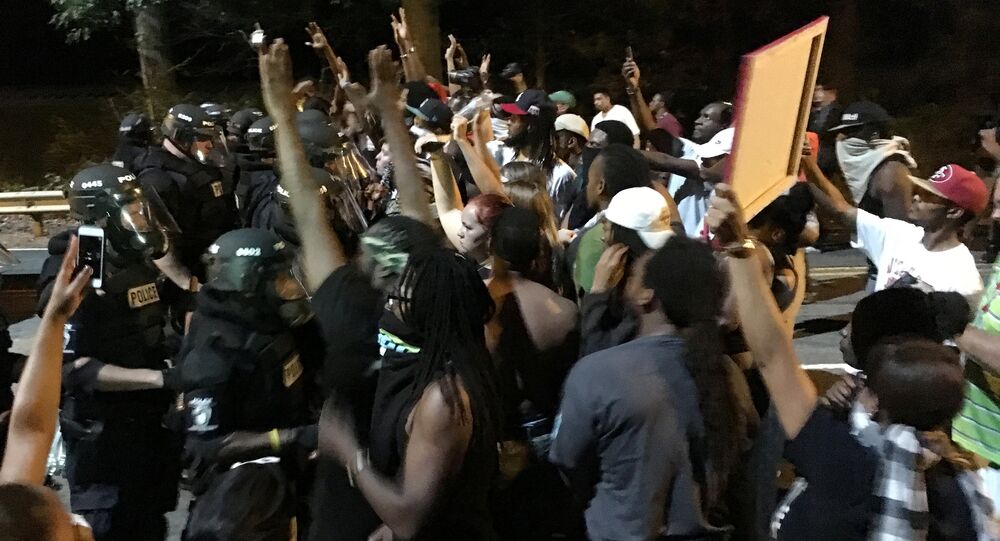 Violent protests left 16 officers and several civilian motorists injured Tuesday night after a black man was killed by police earlier in the day. On Wednesday, the city prepares for continued demonstrations.

© AP Photo / Jeffrey Phelps
Officer Injured in Milwaukee Riots Over Killing of Black Man by Law Enforcers
“It’s time to change the narrative, because I can tell you from the facts that the story’s a little bit different as to how it’s been portrayed so far, especially through social media,” Putney told reporters.

“I can tell you we did not find a book that has been referenced to,” Putney continued. “We did find a weapon. The weapon was there and witnesses have corroborated it, beyond just the officers.”

The police have video of the incident, but Brentley Vinson, a black officer who fired the fatal shots, was not wearing a body camera at the time. The department maintains that Scott ignored several orders to drop his weapon. The American Civil Liberties Union is calling for the immediate release of the video.

During the ensuing riots, all lanes of Interstate 85 were blocked, and motorists reported being injured and their vehicles damaged as rioters threw rocks, bottles, and traffic cones off an overpass and onto the traffic passing below.

As fires burned in the street multiple rounds of teargas were deployed throughout the night, beginning at around 11:00 PM.

It was reported that 16 officers sustained mostly minor injuries, though one officer was reportedly hit in the face with a rock. Three reporters from local station WBTV were also injured, with one hospitalized.

A Walmart was looted around 3:30 AM, and remained closed and boarded up on Wednesday. At least three tractor trailer trucks were also looted, with some contents burned on the highway.

Describing the incident that led to the killing, police claim they had been looking for a man to serve with a warrant when they saw Scott, who was not the person they were seeking. The officers claim they saw Scott exit his vehicle holding a weapon, and then get back into his car. When officers approached, they say that he exited the vehicle again, holding his weapon.

In a statement, the department claimed that he “posed an imminent deadly threat to the officers, who subsequently fired their weapon striking the subject.”

“The officers immediately requested Medic and began performing CPR,” the statement also noted. Scott was pronounced dead at the hospital.

The father of seven has been described by relatives as a loving family man.

“These tragic incidents have once again left Americans with feelings of sorrow, anger and uncertainty,’’ US Attorney General Loretta Lynch said of the shootings in Charlotte and in Tulsa, Oklahoma, four days prior. “They have once again highlighted – in the most vivid and painful terms – the real divisions that still persist in this nation between law enforcement and communities of color.’’

Facebook/Etan Thomas
Oklahoma City Braces as Police Release Disturbing Footage of Cops Killing Unarmed Black Man (VIDEO)
On Wednesday, Nation of Islam representative B.J. Murphy, along with Scott’s family, called for a boycott on white-owned businesses in Charlotte, urging "all black people to keep your money in your pocket. Let everybody feel the pain economically of what we are feeling physically when you kill us."

Corine Mack, president of the Charlotte chapter of the NAACP, referred to the shooting as a “lynching.”

"When will our lives truly matter? A black father is dead. There are children tonight who will never see their father again," Mack told KTLA.