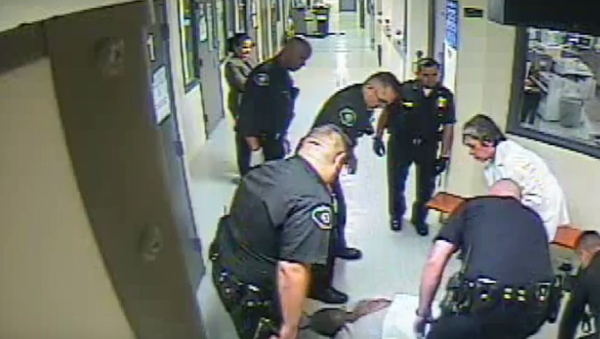 © YouTube/ProPublica
Subscribe
A 56-year-old schizophrenic grandfather of seven was taken into custody by the Los Angeles Police Department for driving while intoxicated, and less than an hour later was pronounced dead. A newly released video shows the horrifying final moments of his life.

Former Guard Convicted of Inmate’s Death as Feds Sue NYC over Jail Violence
Vachel Howard was arrested on the afternoon of June 4, 2012, and died after a jail guard placed him in a chokehold.

Last October, the Los Angeles City Council committee approved a nearly $3 million settlement to his family, and a recently posted video explains why.

The upsetting footage was not previously released to the public as a protective order barred its release, but a copy was obtained and made public by ProPublica.

In the footage, Howard is seen being handcuffed to a jail bench, his shirt open from just having been strip searched. He is seen becoming agitated before police arrive, remove the handcuffs, and escort him to see a nurse on staff. He told police that he was a paranoid schizophrenic and that he had not been taking his medications. The police believed that he was high on cocaine.

Howard and the police move out of the view of the surveillance cameras briefly, where a struggle ensued.

When Howard and the officers reappear on camera he is seen attempting to get away. The LAPD claims that Howard attempted to bite Officer Juan Romero. Howard is then thrown violently to the ground, tased five times, and dogpiled by six officers who handcuff and shackle him.

One officer is seen on top of Howard, a knee in the latter’s back. Officer Romero is seen with his arm around Howard’s throat.

Prison Guards Rip Out Inmate’s Eyeball, Whistleblower Who Reported it Fired
The situation continues for four minutes before officers and medics notice that Howard is in trouble. Over the course of the next nine minutes, four officials attempt to perform CPR on the grandfather. Officers are seen smiling and laughing as his body is sprawled on the floor, motionless.

Eventually, emergency medical personnel arrive and, for eight more minutes, attempt to save him before placing him into an ambulance.

“Mr. Howard posed no threat whatsoever,” V. James DeSimone, the lawyer representing Howard’s children, told ProPublica. “He was down on the ground, six officers on top of him, no guns in the nearby vicinity executing a chokehold where there was no threat to the officers or to anybody else. It’s out of policy, it’s unlawful, and in this case it’s murder.”

Officer Romero was suspended for 22 days over the deadly chokehold, but prosecutors opted not to charge him and defended his actions in court filings.

“Given what were indisputably tense and rapidly evolving circumstances, Officer Romero’s decision to apply and upper body hold on the decedent was justified,” the filing said.

"He wasn't going anywhere," DeSimone told CNN after the settlement last year. "There was just no reason to choke this man out. They treated him like someone whose life didn't matter."

000000
Popular comments
"They treated him like someone whose life didn't matter." That's the default policy at every level of governance within the Outlaw US Empire, but even more so outside its borders.
karlof1
18 August 2016, 23:24 GMT4
000000
This is how they treat OTHER AMERICANS. Imagine how they treated Iraqis after they illegally invaded that country. Or how they see Syrians as they plot their terrorist-proxy overthrow of the country. Or how they see the people in any 'enemy' country...