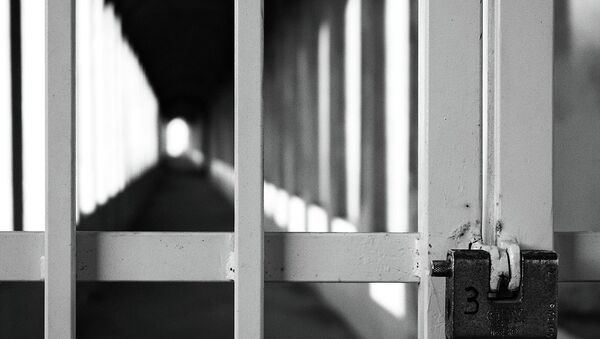 © Flickr / Tommaso
Subscribe
International
India
Africa
After an assault by prison guards left a schizophrenic prisoner’s eyeball dangling from a thread on his cheek, none of the officers would speak up about what happened. Finally one brave corrections officer did - and he was fired for it just hours after the officer involved was sentenced for the gory assault.

In May 2008, Kelly Bradley, 54, barricaded himself inside his cell in the psych ward of the Charlotte Correctional Institution.

Activist’s Death Behind Bars Must Be Probed as Murder, Prosecutor Says

“This inmate was cowering under a blanket in the corner of his cell,” said John Pisciotta, the whistleblower who spoke out to the Miami Herald. “He was an older man, very frail and mentally ill. He wasn’t trying to fight anybody. He was just scared. He was no threat to anyone.”

Worried about Officer William Hamilton Wilson’s aggressive behavior prior to the officers entering the cell, Pisciotta went to Captain Scott Anderson and expressed concern about allowing Wilson to participate in the cell extraction.  Anderson assured Pisciotta that there was nothing to worry about.

Five officers piled into the cell in riot gear, jumping on Bradley and pinning him face down before handcuffing and shackling him.  Wilson, the officer about whom Pisciotta had raised concerns, then began digging his right index finger into the restrained man’s eye.  He repeated the motion several times until the inmate’s right eyeball was ripped out of its socket.

Pisciotta yelled at Wilson to stop hurting the restrained man, but it was too late.

Following the incident, Anderson, a 23-year veteran of the Florida Department of Corrections, called the officers into ask them what happened.  The extraction team remained mum, and nobody heard or saw anything that could explain how the man’s eyeball had been ripped from his face.

Anderson then reportedly told the officers to write up accounts of their individual roles in the attack, and to leave out the injury.  All of the officers complied, except for one, a lieutenant who filled out his report in another room. Even Pisciotta initially complied.  Evidence, including the rubber gloves, was discarded.

“I knew that it was morally wrong. They wanted us to prepare statements and not say anything. I told them I just couldn’t go along with it,” Pisciotta told the Miami Herald.

After telling his colleagues that he was not going to go along with the coverup, Prisciotta testified that Wilson thought the injury was funny, and responded saying, “C’mon, he’s just a f---ing n-----, whatta you care?”

Prisciotta reported what happened and Wilson was arrested.  The same day that he gave his statement to an investigator, the threats and harassment began.

First, he says, he was simply shunned, but that soon escalated into threats.  A union representative even warned him that “it’s going to be rough for you now.”

“Coward” was spray painted on the side of his home. His car was smashed and his transmission wires were cut.

Next, a female officer with whom Prisciotta had previously been romantically involved reported him for brutality, getting him placed on administrative leave.

The Florida Commission on Human Relations would later find the allegation to be false and ruled it a set-up by his fellow corrections officers.

“I knew once I did the right thing, and I stepped forward…my career would be over,” Pisciotta told a jury during Wilson’s trial. “It’s something you don’t do. You don’t go against other officers. Because my life has been a living hell ever since.’’

Wilson was ultimately convicted, and would be the only one criminally charged in the attack.  He was found guilty of civil rights violations and served five years in prison.  He was released in December 2014.  Four of those involved in the coverup have since been promoted.

Pisciotta was fired just hours after the ruling.

Bradley was serving a six-year sentence for burglary and grand theft at the time of the incident.  He was fitted with a prosthetic eye and released in 2009.