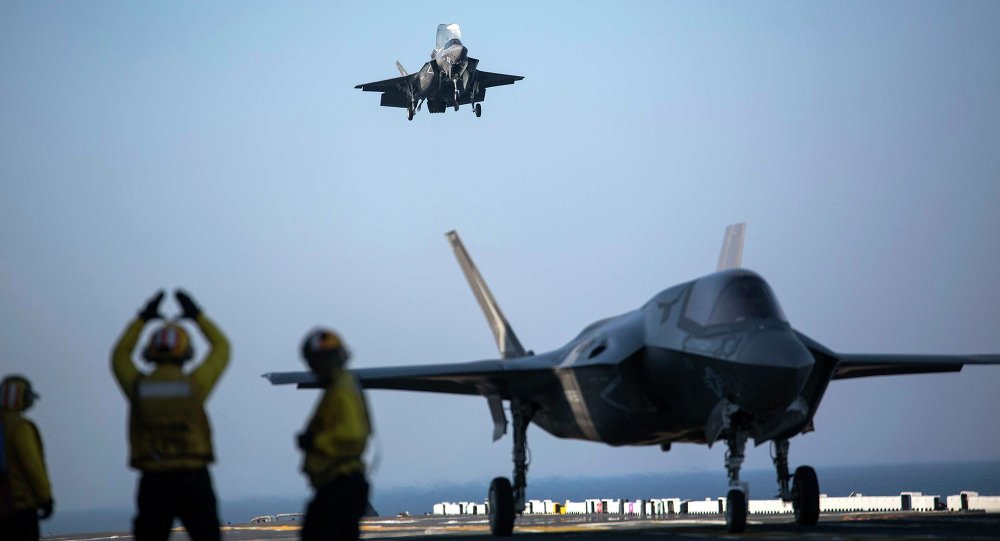 With the F-35A expected to be declared combat-ready next week, the US Marine Corps is similarly confident in its F-35B variant.

After a series of embarrassing setbacks, the US Air Force has filed official paperwork to have the F-35A deemed ready for combat.

"We have achieved all our milestones," said Lt. Col. Steven Anderson, deputy commander of the 388th Maintenance Group, according to Defense News. "We have submitted all of the data to ACC [Air Combat Command] for General [Herbert] Carlisle’s consideration on making that declaration."

Not to be outdone, the Marine Corps quickly expressed confidence in its F-35B variant.

When asked if the jets would be used in missions against Daesh, also known as IS/Islamic State, Davis stated, "we’re ready to do that."

While the F-35A is a conventional takeoff and landing model, the F-35B is a short takeoff and vertical-landing variant, allowing greater flexibility to operate in almost any theatre of combat.

"The bottom line is everybody who flies a pointy-nose airplane in the Marine Corps wants to fly this jet," Davis said.

All F-35 variants have had well-documented problems. The $1 trillion program has experienced software glitches, engine trouble, and flight performance issues. Most recently, the plane’s ejector seat was found to be dangerous to pilots.

A US government report found that pilots weighing less than 136 pounds faced a high likelihood of suffering a fatal neck injury upon ejecting from the fighter. Pilots weighing between 136 and 165 pounds also face an “elevated level of risk,” the report claimed.

But Davis remains confident that the jet is up to snuff.

"There were a lot of people out here in the press that said, 'Hey, the Marines are just going to declare IOC [initial operational capability] because it would be politically untenable not to do that," he said.

"IOC in the Marine Corps means we will deploy that airplane in combat. That’s not a decision I was gonna take lightly nor General [Joseph] Dunford."

The F-35B underwent hover tests earlier this month, and one week later began tests aboard the USS America amphibious ship.

"We’re going to take a VMX [Evaluation Squadron One] jet to the ship, put it in a hangar bay, tear it apart, and put it together again, just to make sure that everything goes well," Col. George Rowell said during the Farnborough International Airshow, according to DoD Buzz.

"I know it will be great, but these are just those things where we go, 'Ok, I think it will be good.'"

With both the F-35A and F-35B approaching combat readiness, the Navy’s F-35C variant is the only holdout.