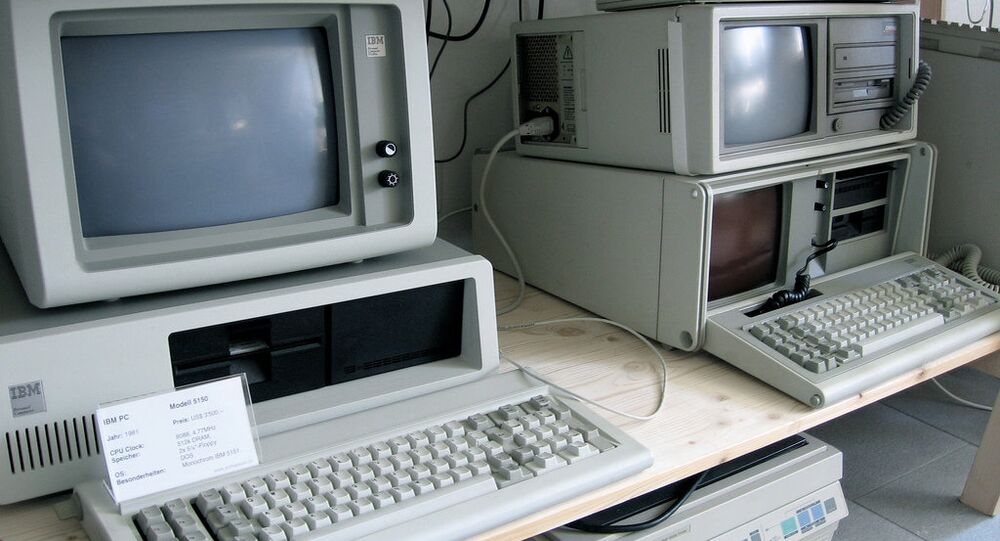 A report by the Government Accountability Office (GAO) states that the Strategic Automated Command and Control System (SACS), which "coordinates the operational functions of the US' nuclear forces, such as intercontinental ballistic missiles, nuclear bombers, and tanker support aircrafts," functions, in part, on 40-year-old 8-inch floppy disks.

To use these discs it is necessary to maintain IBM Series 1 computers, which were first introduced in November 1976.

The presence of this archaic technology isn’t merely a case of America being behind the times, but is actually a tactic designed to protect some of the country’s most sensitive and potentially dangerous information.

In 2014 Maj. General Jack Weinstein told CBS’ 60 minutes that the US military uses floppy discs for the same reason.

"I'll tell you, those older systems provide us some — I will say huge — safety when it comes to some cyber issues that we currently have in the world," he said, explaining that storing information on outdated media instead of using online or local area networks helps protect it from hackers. "A few years ago we did a complete analysis of our entire network. Cyber engineers found out that the system is extremely safe and extremely secure in the way it's developed…we’re not up on the Internet."

There are some that feel that the security of outdated hardware and software isn’t worth the money it takes to maintain it. The GAO believes they are lowballing the $80 billion estimated spent on information technology last year, not counting the Pentagon and independent agencies like the CIA.

The report also indicated that "replacement parts for the system are difficult to find because they are now obsolete," in reference to SACS, noting that SACS isn’t the only government agency that relies on legacy technology to store critical data.

Some Social Security systems currently function on programming called COBOL, which was first used in the 1950s and 1960s. According to GAO, "Most of the employees who developed these systems are ready to retire and the agency will lose their collective knowledge," the report said. "Training new employees to maintain the older systems takes a lot of time." Some of the functions of COBOL include calculating benefits and deciding eligibility.

Parts of the US Treasury’s master files, which contain taxpayer information, are about 56 years old and use the computer language.

Even some of the younger programs, like the 11-year-old Medicare Appeals System are having trouble keeping up with users or keeping pace with appeals.

Most of these agencies have said that they will update their systems, but there are very few hard dates for this expensive and time-intensive overhaul.

The report concluded that "Legacy federal IT investments are becoming obsolete.The federal government runs the risk of continuing to maintain investments that have outlived their effectiveness and are consuming resources that outweigh their benefits."

These concerns have also reached the halls of Congress. Jason Chaffetz (R-UT) claims, "This is not a partisan issue…We all need to come together on this, on both sides of the aisle," he said, adding, "It is a vital part of the infrastructure we need in order to have a fully functional government."

US Drone Policy Expected to Be 2 Years Behind Schedule - GAO

14% of US Lobbyists Fail to Disclose Past Gov't Jobs - GAO