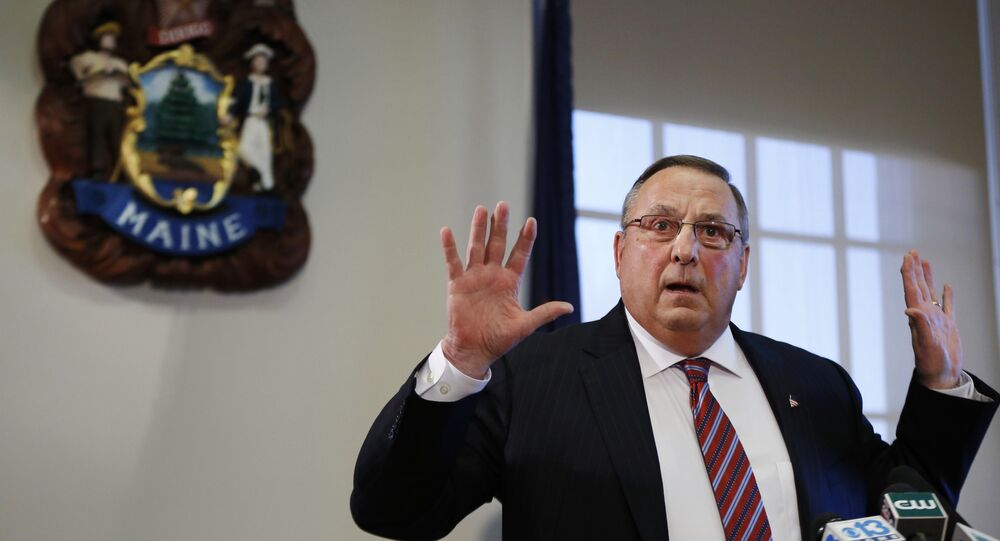 During a town meeting on Wednesday, Maine’s Republican Governor Paul LePage brought up what he considers to be the most pressing issue facing the state.

"Over 50% of the drug problem is illicit drugs, because it’s cheaper to go onto heroin than it is to take Oxycontin."

Fine so far. But then Governor LePage begins to define the term "trafficker," as he sees it.

"The traffickers, these aren’t people who take drugs. These are guys with the name D-Money, Smoothie, Shifty, these types of guys, they come from Connecticut and New York, they come up here, they sell their heroin, they go back home," he said.

"Incidentally, half the time they impregnate a young, white girl before they leave."

LePage paused for response, but hearing crickets, continued, "Which is a real sad thing because then we have another issue we have to deal with down the road."

While LePage may have hoped that a quick jump to the issue of teenage pregnancy would distract from the words that came out his mouth seconds before, the Internet, nevertheless, took notice.

In the wake of the controversy, LePage's office denied that the governor's comments referred to racial stereotypes.

"The Governor is not making comments about race," reads a statement provided to ABC News. "Race is irrelevant. What is relevant is the cost to state taxpayers and the emotional costs for these kids who are born as a result of involvement with drug traffickers."

On Friday, LePage made his own apology…sort of. According to the governor, his statements weren’t the manifestation of deep-seated prejudice, but just an embarrassing byproduct of his fun, freewheelin’ style.

"I was going impromptu," he said, according to the Associated Press, adding that his "brain didn’t catch up to [his] mouth."

"Instead of 'Maine women,' I said 'white women,'" he said. LePage blames this mental flub on the fact that Maine is statistically the whitest state.

He also blamed the press for focusing on the wrong part of his address.

"Get your heads out of the sand, please," he said, according to AP. "I probably couldn’t get so many of you here without saying something foolish."

But the governor’s response has done little to assuage critics.

"The fact that he wasn’t thinking about what he said is more disturbing than what he said," Democratic Maine state Senator Linda Valentino told the Associated Press. "This shows how he really feels."

This isn’t LePage’s first time in the national spotlight. He made headlines in 2011 for his opposition to a state ban on a potentially harmful chemical in plastics.

"The only thing that I’ve heard is if you take a plastic bottle and put it in the microwave and you heat it up, it gives off a chemical similar to estrogen," he said, according to the Bangor Daily News. "So the worst case is some women may have little beards."