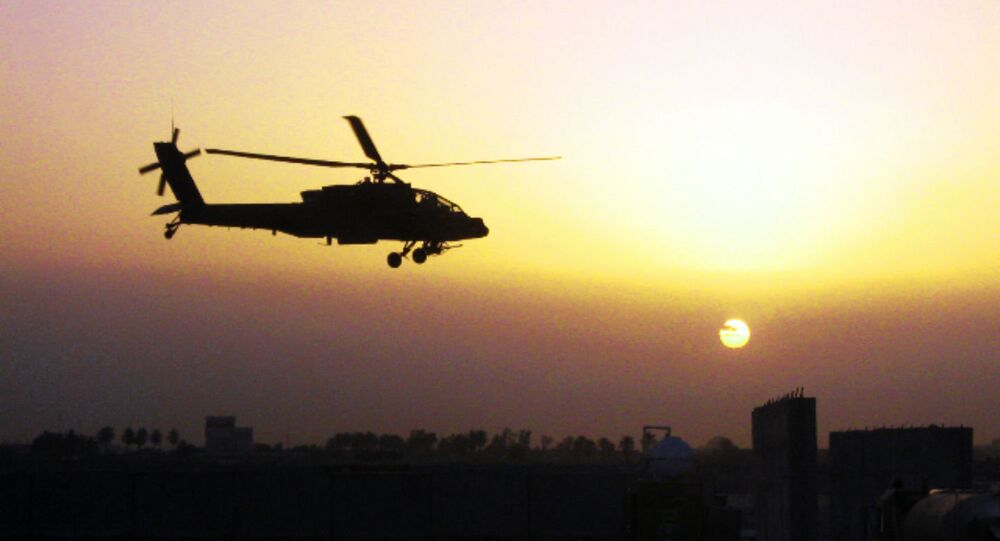 The Pentagon indicated that the US would be willing to supply Iraq with attack helicopters to help combat terrorism, but the Iraqi government has respectfully declined the offer.

Last week, the US announced plans to give the Iraqi Army a fleet of Apache attack helicopters to be used in Baghdad’s fight against Daesh, also known as ISIL/the Islamic State.

"The United States is prepared to assist the Iraqi Army with additional unique capabilities to help them finish the job, including attack helicopters and accompanying advisers, if circumstances dictate and if requested by Prime Minister Abadi," US Defense Secretary Ashton Carter stated in an address before the Senate Armed Services Committee last week.

But after a Wednesday meeting between US and Iraqi officials, Baghdad appears uninterested in the aircraft package.

"This is a very complex environment that we’re operating in and we have to be attentive to some of the political realities that surround us every single day," said Lt. Gen. Sean MacFarland, a top US commander in the fight against Daesh, according to Stars and Stripes Magazine.

"It’s kind of hard to inflict support on somebody. So we try to provide support."

Iraq’s refusal reportedly stems from fears that an increased American presence would be perceived negatively. Carter addressed these concerns at the beginning of the meeting.

"Everything we do…here is subject to the approval of the sovereign Iraqi government," he said, according to Stars and Stripes. "And I also wanted to emphasize to you, the respect for sovereignty and for Iraq’s territorial sovereignty is a principle that the United States strongly supports in every context."

While Iraqi Prime Minister Haidar al-Abadi may ultimately accept the offer at some point in the future, for now, Baghdad has refused, according to Carter.

Earlier this month, the Iraqi government criticized a Pentagon plan to deploy additional troops to Iraq, stressing that an increased American presence could only harm Baghdad’s anti-terror effort.

"First, it will lead to a split among Iraqis, and so the division of their positions in fighting Daesh," Ammar Tu’ma, Iraqi lawmaker and leader of the Al-Fadhila Party, told Sputnik.

"Second, it will empower the terrorist organizations – the number of young people in their ranks will increase. The young people will fight foreign forces, [as] invaders on their lands. Hence, I think that [such a decision] would bring more problems than solutions."

There was also a concern that any supply of heavy weaponry would fall into the hands of terrorist organizations. In June, the Iraqi government admitted to losing thousands of US-supplied Humvees.

Iraq May Decline Joining Saudi-Led Coalition in Fight Against Daesh