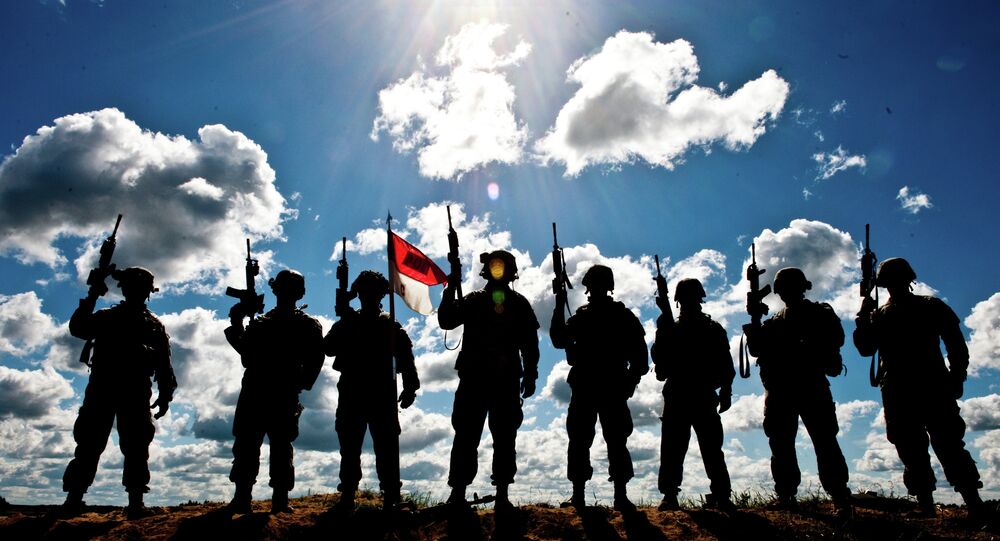 US Borrows Hardware From Allies in Europe to 'Deter Russia'

It has now been almost three years since the last American tanks were brought back to home soil, but now they US Army is planning on either bringing back these deadly machines to the region temporarily or borrowing hardware from allies in Europe in order to carry out planned exercises, The New York Times wrote.

© AP Photo / Alik Keplicz
Really? NATO Respects Duty to Not Build Bases Near Russia - US Commander
According to the Army's commanding general in Europe Ben Hodges, there are not enough troops and equipment in the region, which poses a problem for NATO.

The paper stated that despite the cuts US commanders still face the task of responding to some mysterious "Russian threat" alongside the rising havoc in the Middle East.

Since 2012 the number of permanently stationed US troops on the Continent saw a 35 percent decrease. Additionally, some of the combat vehicles, armament and supporting machinery were also sent home.

As a result, Hodges says, Black Hawk helicopters used in NATO's summer drills were temporally redeployed from US Fort Stewart base and transporting helicopters takes weeks.

"I don't have bridges, I don't have the trucks that can carry tanks, we don't have enough helicopters to do what we need to do," General Hodges said. In the end, they borrowed equipment from their British, German and Hungarian allies.

The paper noted that the multinational airborne exercise that took place at the end of summer was of largest scale in Europe since the Cold War. At that point there were 300,000 US soldiers stationed in Europe, now the US is struggling to figure out how to make up for this amount.

Almost 5,000 soldiers from 11 NATO states participated in the recent exercise with an obvious goal — to demonstrate to Russia that despite defense budget cuts, negative consequences of wars in the Middle East and public exhaustion with overseas missions the allied forces are still battle ready.

Not all American politicians agree, though, that Washington should suffer the expense of keeping US troops in Europe. Some lawmakers have even opposed closing military facilities in their districts while bases in Europe are open.

"At a time when we must seriously consider cuts to our budget and balancing our budget, we should not continue to subsidize the defense of wealthy European nations against a Soviet threat that ceased to exist two decades ago," Representative Jared Polis, a Colorado Democrat, said on the House floor in 2012.

© AFP 2021 / PETRAS MALUKAS
US Lacks Sufficient Military Equipment to Supply Europe - Army Commander
At the same time, current and retired officers with command time in Europe claim that US army needs to strengthen the military potential of its allies so that they are able to protect their own territories.

The Obama administration has already reduced the number of troops in Iraq and Afghanistan, and further cuts are anticipated, The New York Times wrote. Yet, some officials have noted that defense budget cuts may put the US army in a dangerous position in case America has to carry out two major operations simultaneously.