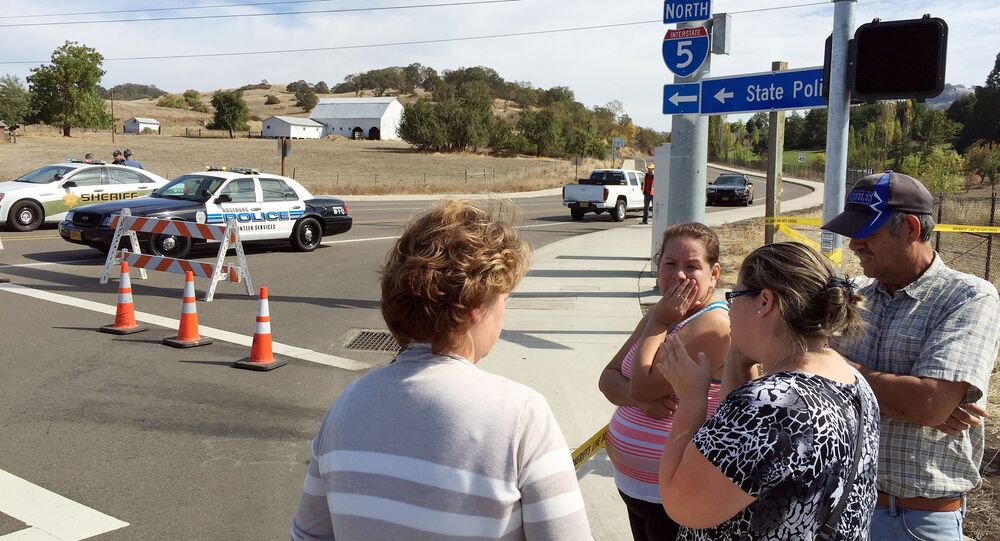 An active shooter situation at a community college in Oregon has left ten dead and seven injured, according to unconfirmed reports. The gunman has been identified as 26-year-old Chris Harper Mercer, according to CBS News, citing law enforcement sources. He has been confirmed dead.

Douglas County Sheriff John Hanlin has confirmed that the shooting resulted in ten fatalities with an additional seven injuries.

According to Sky News, citing a local newspaper, student Kortney Moore said was in class when a bullet came through the window. According to Moore, the gunman told people to stand and state their religion before opening fire.

Multiple media previously reported that as many as 15 were killed, citing Oregon State police. Multiple ambulances have been seen transporting at least 11 patients to Mercy Medical Center, two of which are dead. Local hospitals were anticipating an unknown number of injured. Sacred Heart General Hospital in Eugene was expecting three patients by helicopter, according to NBC.

"I turned around. I heard active shooter and I didn't need to be told twice," Umpqua student Larry Howell told NBC news.

"Everybody is reaching out to one another and checking on everyone, we don't know which one of our colleagues are down," he added. "We heard on the scanners that two of them didn't make it on their way to the hospital."

According to the Douglas County Sheriff's Office, the shooting occurred at approximately 10:38 in the morning, as students were heading to class. According to a fire official, the shooting took place inside a classroom inside the campus science building. First responders found "multiple patients in multiple classrooms," Douglas County Fire Marshal Ray Shoufler told CNN.

According to CNN, the shooter reportedly posted something online before the shooting.

The 911 dispatch audio recording gives chilling as police arrived at the scene.

Earlier preliminary reports suggested that 10 may have been killed.

Students are being bused to the local Douglas County Fairgrounds.

"It was really scary," student Lacey Gregory told local KOIN. "Our hands went over our heads as we walked out in a single-file line…We just stood there and prayed to God that we were going to make it."

According to the Portland Oregonian, agents from the US Bureau of Alcohol, Tobacco, Firearms, and Explosives are on the scene, and the FBI is en route. K-9 units are also on the scene searching for any possible explosives.

The shooting occurred at Umpqua Community College in Roseburg, Oregon, roughly 175 miles south of Portland. Reports suggest that the gunman has been "neutralized," and that a gunfight between the suspect and police took place. The shooter has been identified as 26-year-old Chris Harper Mercer of Los Angeles, according to CBS News, citing law enforcement officials. It remains unclear what his affiliation to the college is.

The shooter has been confirmed dead by Douglas County Sheriff John Hanlin.

This marks the 45th school shooting in the United States so far this year. During a press briefing Thursday afternoon, White House press secretary Josh Earnest stressed that gun control remains a priority for the Obama administration.

"We've not seen that kind of strong bipartisan support across the country translate into legislative support in the United States Congress that's sufficient to pass legislation that would, again, implement these kinds of common-sense solutions," Earnest told reporters.

"This is a political choice that we make," President Obama said during a news conference Thursday evening, urging for gun law reforms, "to allow this to happen every few months."

After being on lockdown, the campus is now reportedly secured.