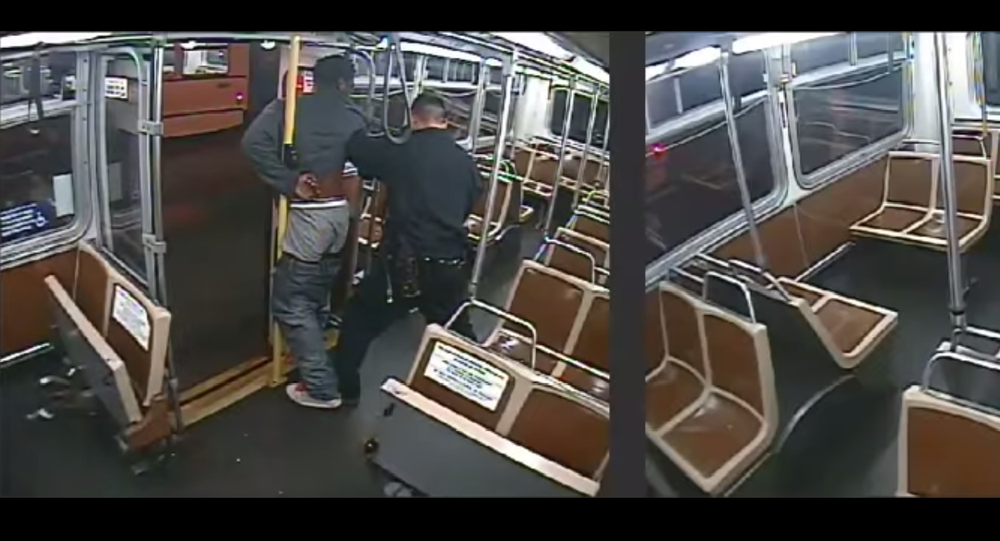 A San Francisco police officer pepper sprayed and beat a homeless man for refusing to get off the bus.

In a video released by the Public Defender’s office, Officer Raymond Chu is shown waking up a man sleeping in the back of a Muni bus, and trying to escort him off.

When the man, later identified as Bernard Warren, 36, objected, the cop struck him with a baton and pepper-sprayed him, forcing him onto the street.

On his way out, Warren is heard saying to the officer, “Don’t touch me. I could beat your a--.”

Chu then becomes agitated and shoves Warren off the bus, then yells: “We done here? We done here? Yeah, keep walking,” before his strikes him with a baton in the back of his legs.

The officers confirms in his police report that he had struck Warren with the baton and pepper-sprayed him, according to the Public Defender.

Warren was arrested on charges of threatening a police officer. He spent two weeks in jail but was released over prosecutor’s objections.

YOUTUBE/lohf90
Cop Arrests Man Filming Police Brutality, Tries to Destroy Evidence (VIDEO)
He is scheduled to return to court on March 4, and could face up to one year in jail if convicted of the charges, said Deputy Public Defender Andrea Lindsay.

"Fundamentally we have a situation where a man was sleeping, which is not a crime," Coalition on the Homelessness Executive Director Jennifer Friedenbach told the Huffington Post. "It started off as completely innocent. This should not be a police situation. By aggressively charging [Warren], this sends a message to the officer that his behavior was acceptable, that it’s okay to escalate non-criminal situations."

The District Attorney’s Office is investigating the case, according to spokesman Max Szabo.