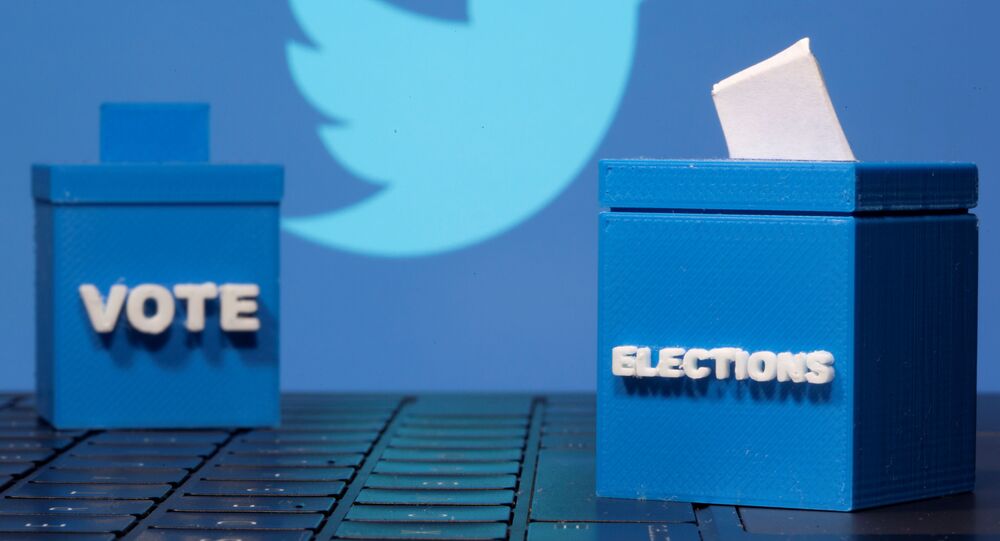 The key battleground states of Pennsylvania, Michigan and Georgia have now been called in Joe Biden’s favour by the US media, despite the results of the vote being disputed by the Trump campaign, which alleges major election fraud.

US President Trump weighed in on the controversy surrounding the suspension of the Twitter account of Big Data Poll director Richard Baris, also known as the “People’s Pundit”.

The pollster’s account was temporarily blocked this week, following the Baris’ report that nearly 10,000 “confirmed dead” people have returned their absentee ballots in the state of Michigan which has been called for Joe Biden by American news outlets.

Trump shared the news about Twitter’s action against the respected pundit, while reiterating Baris’ claim that 10,000 dead people voted in Michigan.

“When will this RIGGED ELECTION be overturned!” the president decried.

Top US Pollster and Statistician Richard Baris — People's Pundit — SUSPENDED from Twitter for Reporting on Disputed Election — Political 'WrongThink' Not Allowed https://t.co/uHBZnJJn1I via Said 10,000 DEAD PEOPLE VOTED IN MICHIGAN. When will this RIGGED ELECTION be overturned!

Claims of ‘Dead’ Voting in Michigan

“While I'm open to the idea some of these have been rejected, I'm not open to any outright dismissal they all were rejected. This was a small, tested listed that suggests irregs are plenty,” the statistician asserted on Sunday evening.

While I'm open to the idea some of these have been rejected, I'm not open to any outright dismissal they all were rejected.

This was a small, tested listed that suggests irregs are plenty.

He said in a following tweet that a similar analysis will be carried out in Georgia, another highly disputed battleground state, “regardless of the results of this particular election.”

Twitter has marked both posts with “disputed” claim label.

We have access to voter files. That is our business.

There are ≈132k CoA flags on the rolls in Fulton County, Georgia. First image excludes CoAs, the second does not.

It's not "disputed". It is reality. pic.twitter.com/OGBS9EcEiQ

According to the pollster’s analysis, shared by the Epoch Times, around 9,500 voters in Michigan who were confirmed dead through the Social Security Death Index have returned their ballots based on the state’s mail voting database. Another 2,000 are said to be 100 years old or more and not listed as “living centenarians”.

Spokeswoman for the Michigan Secretary of State, Tracy Wimmer, meanwhile said that votes on behalf of dead people will be rejected by election authorities.

Baris’ reported findings were still widely circulating across the net this week. On Wednesday, his account was censored by the platform, something that has caused a strong backlash from the public.

Following a major outcry, Baris’ account has been restored the same evening. However, profiles of his wife Laura Baris and Big Data Poll which have been suspended alongside him, still remain locked to this day

And about to join @TuckerCarlson in a few minutes.

Shortly after Baris made a scandalous claim about thousands of “dead” votes in Michigan, Fox News host Tucker Carlson unveiled a long list of dead Americans who he said have “voted” on Election day, as ballots were apparently sent out to the addresses of deceased people.

According to the host, who had also interviewed Baris after the pollster’s account was restored on Twitter, it was a failure to update thousands of registrations that had led to this alleged irregularity. Carlson believes, without providing evidence, that the votes of the dead people were cast for Joe Biden.

Michigan has already landed in the centre of attention during this election season after an anonymous USPS insider from Barlow Brach told Project Veritas’ James O’Keefe that he and his colleagues were instructed by their supervisor on 4 November to separate all incoming ballots arriving later than the Election Day and hand-stamp them “3 November” so they'd be counted as valid. Similar claims have resurfaced from Pennsylvania’s USPS branch, but have remained unsubstantiated so far.

Trump's campaign has filed dozens of lawsuits across the country to dispute election results in a number of key swing states, citing lack of transparency from Republican observers to oversee the vote counting.

The president maintains that the election has been “stolen” from him with a major election fraud, as POTUS claims he “easily” won both Michigan and Pennsylvania.

“Nobody wants to report that Pennsylvania and Michigan didn’t allow our Poll Watchers and/or Vote Observers to Watch or Observe. This is responsible for hundreds of thousands of votes that should not be allowed to count,” Trump tweeted this week.