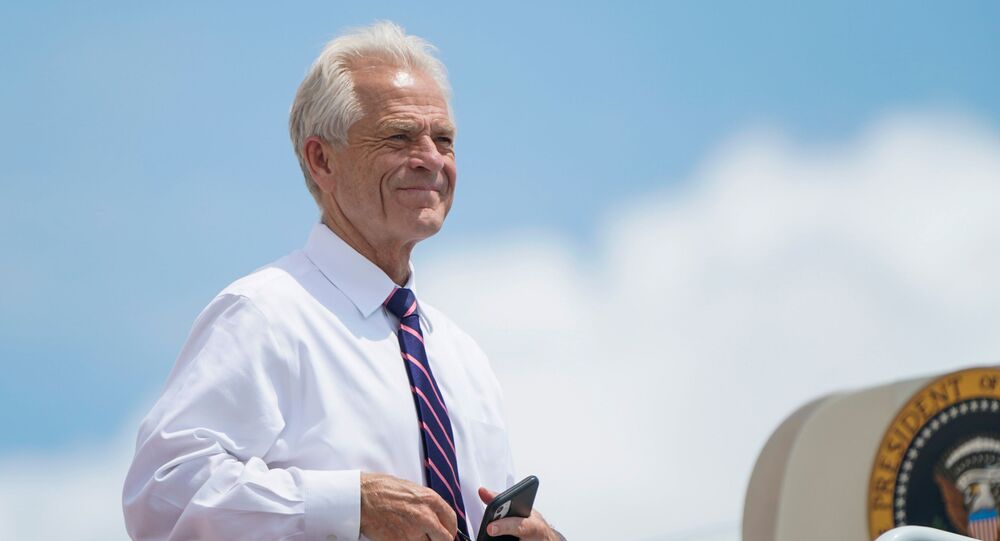 Although the US Electoral College has confirmed Joe Biden's victory in the presidential election by giving him 306 electoral votes, many Republicans, including the sitting president, continue to assert that the election was "rigged" and that massive "voter fraud" took place.

The director of the Office of Trade and Manufacturing Policy, Peter Navarro, on Thursday rolled out a report regarding allegations of election fraud in the 3 November 2020 presidential election in the United States, indicating that he did it in a personal capacity and not as an official White House advisor.

"From the findings of this report, it is possible to infer what may well have been a coordinated strategy to effectively stack the election deck against the Trump-Pence ticket," stated the Navarro publication, titled: The Immaculate Deception: Six Key Dimensions of Election Irregularities. "Indeed, the observed patterns of election irregularities are so consistent across the six battleground states that they suggest a coordinated strategy to, if not steal the election outright, strategically game the election process in such a way as to 'stuff the ballot box' and unfairly tilt the playing field in favor of the Biden-Harris ticket."

According to Navarro's unofficial belief, some ballots that he dubbed questionable due to "the identified election irregularities" would be enough to secure a victory for incumbent US President Donald Trump, "should even a relatively small portion of these ballots be ruled illegal".

In the report, the Trump-appointed trade advisor examined what he described as "six dimensions" of election irregularity allegations, among which would be "outright voter fraud", "ballot mishandling", "contestable process fouls", "equal protection clause violations", "voting machine irregularities" and "significant statistic anomalies". According to Navarro, the so-called six key dimensions were detected and proven in six battleground states.

According to his report, without a "thorough investigation" prior to the 20 January Inauguration Day, Americans may see Biden's presidency as illegitimate.

On Thursday, Navarro,"in his capacity as a private citizen", discussed his findings at a press conference, according to the press release.

© AP Photo / Evan Vucci
'It's Not Over': Why Team Trump Continues to Fight Regardless of Electoral College Voting for Biden
Despite that Trump and his Republican allies continue in their attempts to challenge the election outcome, the Electoral College on 14 December gave 306 votes to Biden, marking the Democrat's victory, while Republican Trump, who has not yet conceded, received 232.

The Electoral College vote will be certified by the US Congress on 6 January, and there are reports that some Republicans could take final shots in attempting to scrap the Biden-Harris victory.

An effort is being led by GOP Congressman Mo Brooks and GOP Senator-elect from Alabama, Tommy Tuberville, who said that he will "probably" meet with Navarro and "get his side of it", hinting that the latter might join the initiative.

Trump has tweeted praise toward Tuberville several times, referring to him as a "hero" and "a man of courage", and thanking him for the apparent intention to support.

That’s because he is a great champion and man of courage. More Republican Senators should follow his lead. We had a landslide victory, and then it was swindled away from the Republican Party - but we caught them. Do something! https://t.co/nZU0czsZgB