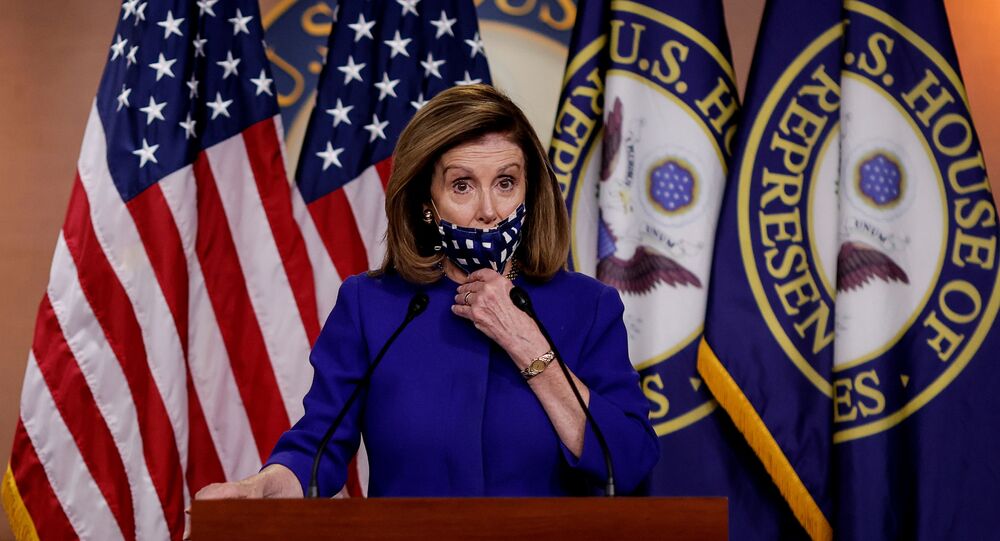 Ahead of the US election, Democratic Party officials, buoyed by forecasts from pollsters, had been hoping for double-digit gains to their majority, yet early returns had provided a reality check that is being touted as the harbinger of strategic changes to come within their ranks.

Speaker of the US House of Representatives Nancy Pelosi (D-Calif.) might be staring at a challenge in the wake of the elections in America and the Democratic Party’s perceived lackluster showing at the polls on 3 November, according to The Hill.

Two ‘moderate’ House Democrats are cited by the outlet as saying that together with other centrists they have been in talks over whether to throw their support behind someone who might unseat Pelosi as Speaker.

The two Democrats were reportedly putting out feelers among their colleagues to gauge their reaction to suggestions about backing House Democratic Caucus Chairman Hakeem Jeffries (D-NY) for Speaker in the next Congress.

“He’s the only one prepared and positioned” to be Speaker, one of the Democratic lawmakers was quoted as saying.

“He bridges moderates and progressives better than anyone. And most importantly, he’s not Nancy Pelosi,” he added.

Jeffries, 50, is a member of the US House representing New York's 8th Congressional District and had his stint in the limelight as one of seven impeachment managers for Donald Trump's Senate trial, in an impeachment case against the President initiated by the House Democrats in 2019 in the wake of an August whistleblower complaint alleging Trump's abuse of power.

​The reportedly ambitious Jeffries has been regarded by many Democrats as poised to become the first black speaker of the House after Pelosi steps down.

Hakeem Jeffries was cited as dismissing all speculations that he might challenge Pelosi’s seat immediately, insisting he was focused on dealing with the issues his current position entailed.

However, the report in itself is perceived as a telltale sign of the dramatic internal changes likely to follow the 3 November polls.

As America headed into the presidential elections, Nancy Pelosi, the first female Speaker in the nation's history, was bolstered by the overwhelming support of her caucus and promising forecasts from many nationwide polls.

With no inkling of a threat to her Speakership, together with other Democrats Pelosi was anticipating big gains to their majority, writes the outlet.

However, early returns heading into Wednesday evening showed that instead of expanding their share of seats in the House of Representatives, the Democrats saw some of their most promising legislators ousted by opponents, while failing to flip a single Republican seat.

Many races, however, remain undecided.

Although control of the lower chamber will remain in Democrats’ hands, the perceived lack of success originally aimed for had allegedly left the party questioning the strategic decisions made throughout their campaign.

“Pelosi needed to hammer Trump but instead she chose to let him slide… Last night should have been a bloodbath for Republicans,” a former senior Democratic aide was quoted as saying.

With Pelosi targeted amid frustration over early election returns, one of the Democrats told the publication

He added that while Democratic policies can address these issues, their current “messaging mechanism clearly cannot”.

The Democratic lawmakers were cited as currently having conferred with two dozen members from various factions of the caucus, including the Congressional Black Caucus, Progressive Caucus, New Democrat Coalition and bipartisan Problem Solvers Caucus.

The current election results have reportedly raised questions about the strategy that resulted in a seeming disconnect between recent surveys and the outcomes they failed to predict.

1) Biden is well on his way to flipping MI & WI (in addition to AZ & #NE02) and is doing well enough in PA's completed counties to be on track to win there
2) Polls (esp. at district-level) have rarely led us more astray & it's going to take a long time to unpack

​‘Not a Race for Speaker’

Nancy Pelosi's chief spokesman, Drew Hammill, dismissed talk of a leadership challenge to her as a distraction at a time when the race between Donald Trump and Democratic presidential nominee Joe Biden was still undecided.

“Today is not about the race for Speaker. Today is about the race for the White House and ensuring that our Members and candidates in uncalled races have the support they need. That is our focus,” he was cited as saying in an email.

In response, a spokesperson for Jeffries suggested that the Democratic caucus chairman had no intention of seeking a higher position, adding: