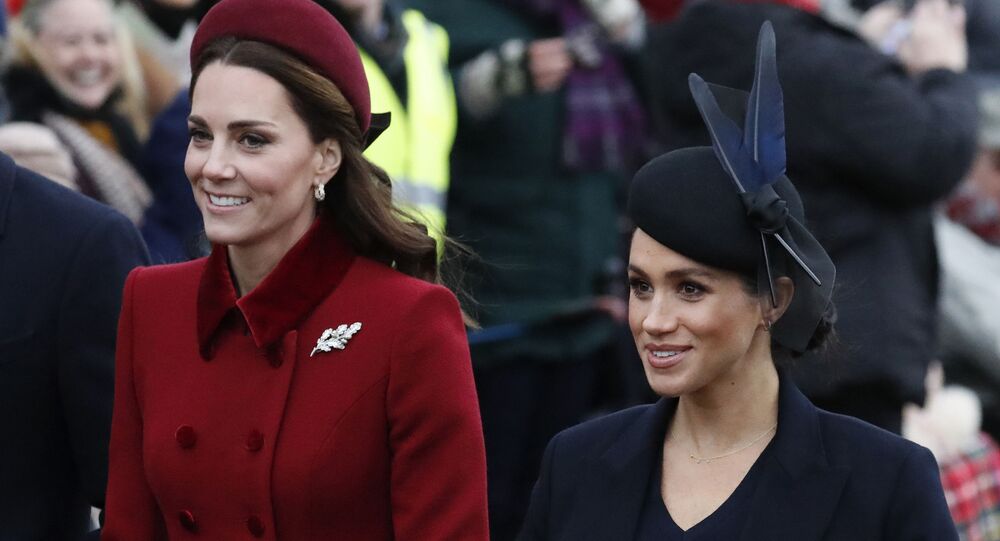 During the two-hour interview, which was viewed by millions of people across the world, the Duchess of Cambridge made several sensational claims about the royal family. In particular, the 39-year-old accused the Palace of racism, spreading lies, and denying her help when she felt suicidal.

A resurfaced photo of Meghan Markle holding a magazine featuring the Duchess of Cambridge Kate Middleton has thrown doubt over claims she made during her tell-all interview with Oprah Winfrey.

Markle alleges that she was completely naïve about the royal family before she tied the knot with Prince Harry, and "didn’t do any research" about them.

However, in the photo in question, which was reportedly taken in 2014 – two years before she met her future husband – the former Suits' actress is holding a copy of Irish U magazine, which features an incorrect headline claiming Kate Middleton was pregnant with twins.

Many social media users argue that the photo proves Markle lied about how much she knew about the UK monarchy before her marriage to the ginger royal.

😂😂😂😂😂😂😂I never knew anything about the royals another lie proved

But she said when she meets Harry that did not know anything about the Royal Family. Once a liar always a liar 🤥

​Previously, the duchess’s half-sister Samantha claimed that Meghan idolised the late mother of Prince Harry – Princess Diana – and even imitated her.

"In fact, Meghan went to great lengths to study Diana, to mimic her clothing, to mimic her body language and to wear Diana’s perfume on their first date! Don’t tell me my sister didn’t know who Harry was!" Samantha Markle said.

A similar allegation was voiced by Meghan’s childhood friend Ninaky Priddy, who was maid of honour at her royal wedding. The two were photographed in front of Buckingham Palace as teenagers and Priddy said Meghan was “fascinated” by the royal family.

Other Claims That Were Questioned

During the two-hour interview, Prince Harry and Meghan Markle made several sensational allegations. Some have been questioned by the British press and several high-profile figures.

Markle claimed that the Palace deliberately changed the rules so that their firstborn son Archie wouldn’t be given the title of prince. However, according to the 1917 decree of King George V, the great-grandchildren of the monarch are no longer called princes and princesses, except for the eldest son of the eldest son of the Prince of Wales – in this case Prince George, the eldest child of Prince William, Harry’s elder brother.

In 2012, four years before Meghan Markle and Prince Harry got acquainted, Queen Elizabeth II released a decree granting all children of Prince William the titles of princes and princesses.

Another claim made by Markle was the allegation that the lavish televised wedding ceremony on 19 May 2018 wasn’t real because the couple got spliced three days earlier in the presence of the Archbishop of Canterbury.

However, the Duchess’s claims raised eyebrows in Britain, because according to UK law, a marriage is only lawful when two witnesses are present. Several weeks after the interview, former chief clerk at the Faculty Office, Stephen Borton, who drew up the licence for the couple’s wedding, said that Meghan Markle was "confused" about the private ceremony. Borton said the couple is likely to have exchanged vows during that ceremony and that the wedding on 19 May was the official one.