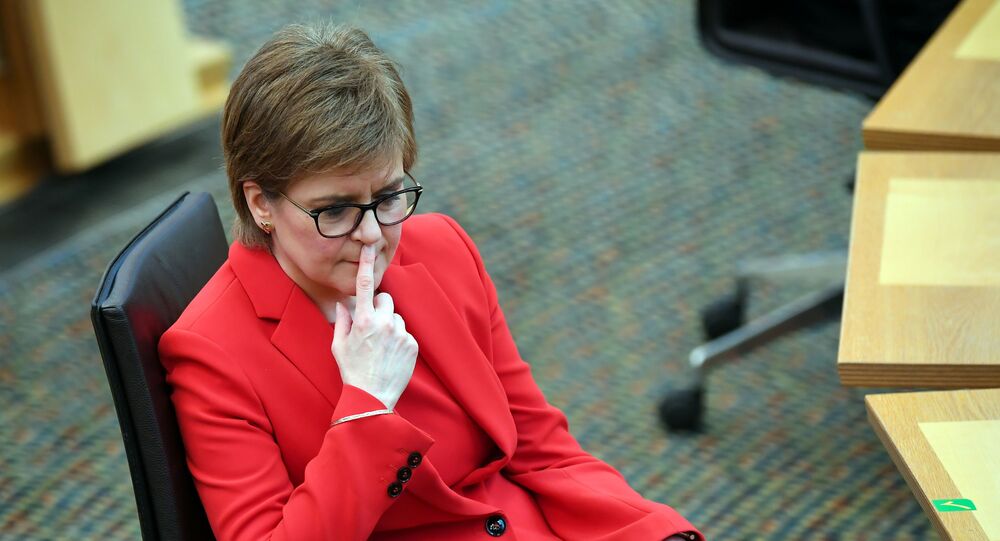 Nicola Sturgeon appeared before the Parliamentary inquiry on 3 March to follow up an earlier written submission with an oral testimony, in which she denied claims made by Alex Salmond that she had offered to intervene in the Scottish government probe into sexual harassment complaints lodged against her predecessor, the former First Minister.

Members of the Scottish parliament’s harassment committee have decided that Nicola Sturgeon potentially breached the ‘ministerial code of conduct’ by misleading them when presenting evidence during a probe into sexual harassment allegations against Alex Salmond, reported Sky News.

Specifically, according to the leaked report, the cross-party committee is understood to have concluded that the First Minister did offer to intervene in the Scottish parliament’s handling of harassment complaints against her predecessor, something she'd previously denied in written and oral submissions to the MSPs.

Alex Salmond, the former First Minister, had insisted Sturgeon had made such an offer during a meeting with him at her house on 2 April 2018.

“She said she would when it was the appropriate time. As I say, the conversation was not about if she would intervene, but when,” Salmond was quoted as having told the committee earlier.

Salmond's account was earlier corroborated by his legal adviser, Duncan Hamilton QC, who was present at the alleged meeting.

The committee had voted along party lines, reaching a decision via slim majority, with five votes including the four opposition committee members and independent MSP Andy Wightman against the four SNP members, writes the outlet.

"The committee notes there is a fundamental contradiction in the evidence in relation to whether, at the meeting on the 2 April 2018, the first minister did or did not agree to intervene. Taking account of the competing versions of the event, the committee believes that she did in fact leave Alex Salmond with the impression that she would, if necessary, intervene,” the leaked report is suggested as having concluded.

The report by the Holyrood Inquiry is therefore claimed to have concluded that in her earlier evidence Nicola Sturgeon offered an “inaccurate account of what happened and she has misled the committee on this matter.”

Finally, according to the MSPs, the actions of the First Minister are a “potential breach of the ministerial code under the terms of section 1.3 (c)," writes the publication.

The full findings of the Scottish Parliament’s harassment committee are to be published early next week.
Separately, James Hamilton, a senior Irish lawyer, has been examining whether Sturgeon breached the ministerial code, with findings to be released independently from the committee in the coming days.

Coming amid a growing chorus of voices urging Nicola Sturgeon to resign, the current report is believed to add further pressure on the First Minister.

“We cannot set a precedent that a First Minister of Scotland can mislead the Scottish Parliament and get away with it. We have to trust that the First Minister will be truthful. We no longer can.”

We have to trust that the First Minister will be truthful. We no longer can.

My full statement on reports that Nicola Sturgeon has misled the Scottish Parliament 👇 pic.twitter.com/6U9WyrP4Bb

According to the Scottish Government’s ministerial code, a minister who “knowingly” misleads the Scottish Parliament - the devolved national legislature of Scotland - is expected to step down. The word ‘knowingly' was allegedly not contained in the ruling of the committee.

Commenting on the leaked report, Nicola Sturgeon was quoted by Sky News as saying:

“I stand by all of the evidence I gave to the committee, all eight hours' worth of evidence. What's been clear is that opposition members of this committee made their minds up about me before I muttered a single word of evidence, their public comments have made that clear. So this leak from the committee - very partisan leak - tonight before they've finalised the report is not that surprising."

The leaked report comes two weeks after Nicola Sturgeon gave evidence about the part she allegedly played in Holyrood’s (as the Scottish Parliament is sometimes called) investigation into allegations against Alex Salmond in 2018.

Alex Salmond was Scotland's first minister and Scottish National Party leader before Nicola Sturgeon, his deputy, took over after the 2014 independence referendum. At the time Scotland voted to remain in the UK by 55 percent to 45 percent.

The Alex Salmond row broke out in 2018 when allegations of sexual harassment were made against him by two female civil servants. Salmond vehemently denied all accusations.

The complaints had come after Nicola Sturgeon had urged new government policies on sexual harassment in the wake of the #MeToo movement, with Salmond claiming the policy targeted him specifically.

The harassment committee has been looking into the procedure after Alex Salmond challenged its legality and a court ruled that it was "unlawful" and "tainted by apparent bias".

Salmond, 66, was subsequently acquitted of sexual assault charges against a total of nine women at a criminal trial in March 2020.

The Holyrood committee accordingly looked into the actions of the first minister, as well as Scottish government officials and special advisers regarding the handling of complaints, as well as matters concerning the ministerial code.

Besides having reportedly offered conflicting evidence regarding when exactly she had first discovered about the allegations levelled at Salmond, Sturgeon is also accused of failing to record specific crucial meetings, and pursuing the case against her predecessor despite lawyers reportedly urging her to drop it.

A spokesperson for the First Minister was quoted as saying on Thursday:

“The question of the First Minister’s adherence to the ministerial code is being considered independently by James Hamilton, and we expect to receive and publish his report soon.”