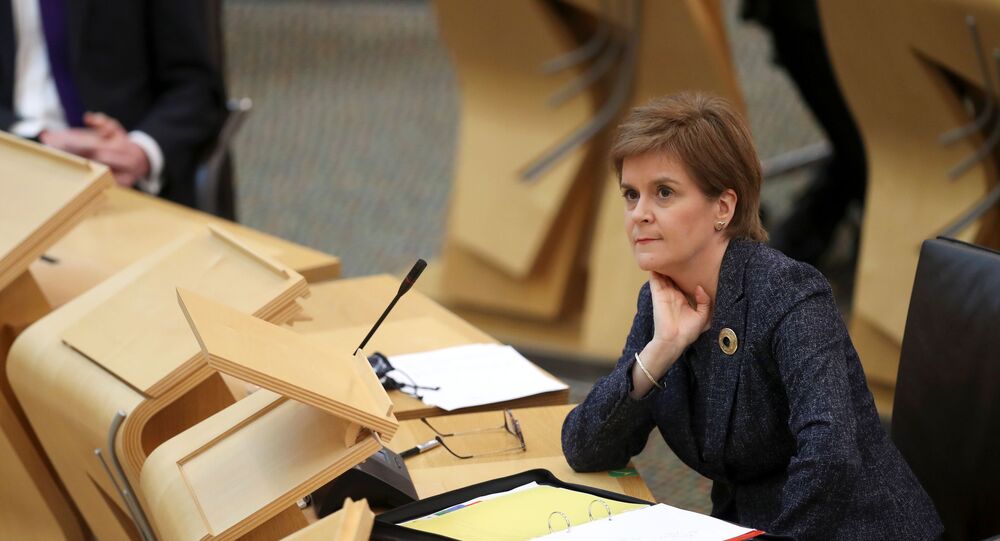 Nicola Sturgeon faces calls to resign if she is found to have breached the Ministerial Code for misleading Parliament or wasting taxpayers' money over her government's pursuit of since-disproven sexual misconduct claims against her former party-mate and predecessor Alex Salmond.

Scottish First Minister Nicola Sturgeon is under renewed pressure to quit after it emerged an official in her government pressured a key witness to change his testimony to the probe into her conduct.

The Sunday Times reported that Geoff Aberdein, former first minister Alex Salmond's chief of staff, submitted a statement to the Scottish Parliament inquiry chaired by MSP Linda Fabiani saying an un-named official had asked him to change his account of a meeting with a government official in early March 2018. Aberdein's statement reportedly says they discussed allegations of sexual misconduct against Salmond.

Sturgeon told the Holyrood parliament that she did not know of those allegations — and her own administration's investigation of them — until she and Scottish National Party (SNP) comrade Salmond met at her home on April 2 2018. Sturgeon later claimed she "forgot" the meeting with Aberdein.

The first minister already faces calls to resign if it is shown she broke the Ministerial Code by misleading Parliament. The Scottish Conservative Party has already vowed to table a no-confidence motion in her after documents published over the last week showed she ignored her own lawyers' advice and wasted hundreds of thousands in taxpayers' money pursuing the claims against Salmond that were later rejected by a criminal court.

"More and more people are seeing that Nicola Sturgeon has tried to cover up what really happened with Alex Salmond," a Sottish Tory spokesman said, adding: “Trust in the First Minister is plummeting as the public realise she has misled parliament and broken the ministerial code."

The statement has not been officially released by Fabiani, but the Times reported that the official asked Aberdein to alter it to say he had only a "suspicion" about the allegations.

© AP Photo / Jeff J Mitchell
Nicola Sturgeon Says It Is 'Absurd' to Say She Was Out to Get Former SNP Leader Alex Salmond
Salmond won a judicial review against the inquiry into his conduct in early 2019, with the judge ruling it was "tainted by apparent bias" after it emerged the government's Permanent Secretary Leslie Evans contacted two of the accusers before the inquiry began.

A poll by Panelbase for the Sunday Times found that a third of Scottish voters think Sturgeon should resign immediately — but 61 per cent want her to go if she is proven to have broken the code. Only 24 thought she should stay on, just and one-in-three thought she had been entirely honest about the affair.

And two new polls showed a reversal of the recent trend of support for independence — the SNP's flagship policy. They indicated that support for seceding from the UK was back to around the 45 per cent result of the 2014 referendum, which Sturgeon has demanded a re-run of following the UK's exit from the European Union.