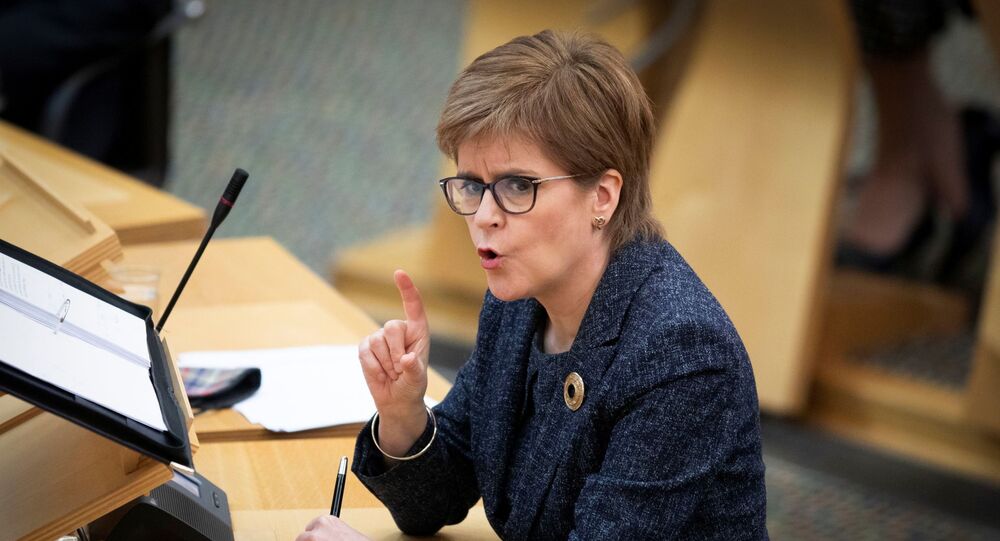 Earlier this week, Former Scottish first minister Alex Salmond claimed to possess "documentary evidence" of a "malicious and concerted" attempt to remove him from public life, as he prepared to give evidence to the Holyrood inquiry into the government's botched handling of harassment complaints against him.

First Minister Nicola Sturgeon has responded to her predecessor Alex Salmond’s earlier accusations of a concerted campaign against him by implying the former official was seeking to divert attention, as he might still be concealing something pertaining to his past behaviour towards women, reported The Guardian.

Sturgeon denounced the former Scottish National party leader for pushing “wild, untrue and baseless claims” about a conspiracy targeting him, as she participated in a COVID-19 briefing on 24 February.

#ResignSturgeon is doing the rounds because of conspiracies being peddled by the @ScotTories.

But, nobody is actually talking about what Nicola Sturgeon had to say after she was hounded by journalists at today’s COVID briefing.

Is this someone that sounds guilty to you? No. pic.twitter.com/YjnDWWNsB2

​The Leader of the Scottish National Party (SNP) since 2014 also pointed out that Salmon had repeatedly refused to give evidence to a parliamentary inquiry into the government's mishandling of harassment complaints against him.

“Maybe creating an alternative reality in which the organs of the state [were] all part of some wild conspiracy against him, for reasons I can’t explain, maybe that’s just easier than accepting at the root of all this might just have been issues in his own behaviour. But that’s for him to explain, if he ever decides to pitch up and sit in front of the committee,” said Sturgeon.

This came as Holyrood officials confirmed Salmond was currently expected to appear before Members of the Scottish Parliament (MSPs) on Friday, with Sky News suggesting he will accept the invitation after earlier cancelling a scheduled Wednesday inquiry appearance amid a row over the redaction of his written submission.

"The inescapable conclusion is of a malicious and concerted attempt to damage my reputation and remove me from public life in Scotland. It is an attempt which would, in fact, have succeeded but for the protection of the court and jury system and in particular the Court of Session and the High Court of Justiciary.”

In his submission, Salmond names those that he alleges sought his downfall, including Nicola Sturgeon's husband Peter Murrell and her chief of staff, Liz Lloyd.

In earlier letters to the inquiry, he accused Sturgeon of "repeatedly" misleading parliament regarding her meetings with him, making statements which are "simply untrue", and breaking the ministerial code.

An SNP spokesperson has responded to the recent submission by dismissing it as “just more assertion without a shred of credible evidence”.

Alex Salmond resigned from the Scottish National Party in August 2018 in the face of allegations of sexual misconduct in 2013, while he was First Minister, which he denied.

Two female civil servants had lodged complaints against him in January 2018 using new rules introduced due to the #MeToo movement. The latter allowed retrospective investigations into former ministers.

The allegations were subsequently investigated internally.

After quitting the party, Salmond brought legal action against the Scottish government, accusing it of abuse of process. The court of session in Edinburgh ruled in Salmond's favour on 8 January 2019. The probe was pronounced “tainted by apparent bias” as the lead investigator had prior contact with the complainers.
Separately, the police launched an investigation into the sexual misconduct allegations.

On 24 January 2019 Salmond was arrested and charged with 14 offences, including two counts of attempted rape.

Following the trial, two separate inquiries followed, with one conducted by a committee of MSPs and another by James Hamilton QC, Ireland's former director of public prosecutions.

The committee is probing the Scottish government's handling of the complaints against Salmond.

The second inquiry is looking into whether Nicola Sturgeon breached the ministerial code by interfering with the civil service investigation into the allegations. Under normal circumstances, writes the BBC, if the First Minister is determined to have been in breach, she could be expected to resign.

Who Wants to Destroy Alex Salmond?