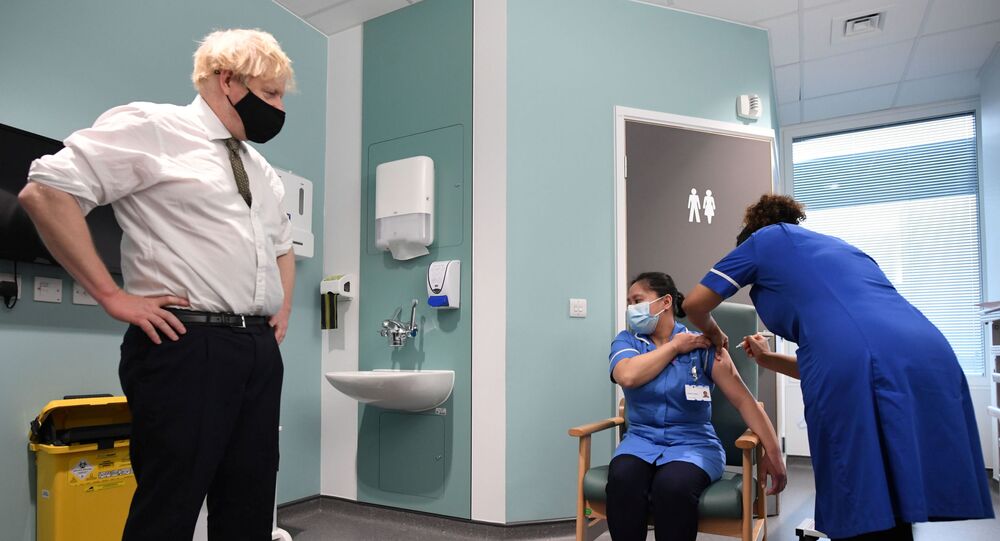 EU-UK Vaccine Row: Britain Has Been Lucky to Develop Its Own COVID Jab, Academics Say

The UK and the EU have crossed swords over coronavirus vaccine supplies as Brussels warned it could restrict exports of the Belgian-made Pfizer jab to Britain, prompting Health Secretary Matt Hancock to accuse the union of “protectionism”. British observers have weighed up whether the bloc's restrictions may hurt Britain's inoculation plans.

The EU-British vaccine row came amid growing frustration with temporary reductions in the shipment of Pfizer’s COVID-19 shots within the bloc as the firm is up-scaling its manufacturing facilities in Belgium. To add to the controversy, the UK-Swedish pharma company AstraZeneca has signalled that it will cut deliveries of the Oxford coronavirus drug to the EU by 60% in the first quarter of the year.

Stella Kyriakides, the European Commissioner for Health and Food Safety, lashed out at AstraZeneca, recalling that the bloc had specifically insisted on a "precise delivery schedule on the basis of which member states should be planning their vaccination programmes". Meanwhile, the bloc's drug regulator has yet to decide on AstraZeneca's approval on 29 January, while the first deliveries of the drug are expected not earlier than 15 February.

The UK is currently leading in terms of total vaccination doses relative to its population compared to European countries. The British government plans to inoculate 15 million people, including elderly people over age seventy, healthcare workers and other vulnerable groups, by mid-February and provide jabs to many more of the over-50s and other priority groups by spring 2021. However, Brussels' new strategy to impose new controls on the export of EU-made shots may theoretically affect the Johnson cabinet's immunisation objectives.

In the future all companies producing vaccines against COVID19 in the EU will have to provide early notification whenever they want to export vaccines to third countries.

​Fortunately for the UK, it has its own in-house manufacturing capability which makes it prepared and resilient, according to Dr. Bharat Pankhania, infectious disease specialist and senior clinical lecturer at the University of Exeter Medical School.

"The expectation is that we will have a secure supply line of the vaccines, especially as Britain has placed several orders with several different providers", he says. "So this way, it reduces the risk of one supplier either not being able to supply or changing its mind to supply."

The infectious disease specialist notes that there is a direct correlation between the population's most vulnerable groups' inoculation and the duration of lockdowns: the longer it takes to immunise the vulnerable groups and the 70+ old-age pensioners, the longer the restrictions have to also remain in place, according to him. Still, Pankhania does not rule out new lockdown measures in case new coronavirus strains overcome vaccine protections.

At the same time, he hopes that Briton won't see a further rise in death rates: "We have now started to immunise the more vulnerable age groups and because the immunisation programme has gotten underway I also expect the death rates to never go as high as they have in this pandemic," the academic believes.

EU is Under Pressure for Failing to Handle First COVID Wave

Germany’s health minister Jens Spahn has recently supported EU proposals which could see restrictions imposed on Covid-19 vaccine exports, as Europeans express frustration with the low pace of the bloc's immunization programme. Meanwhile, the Evening Standard quoted Latvian foreign affairs minister Edgars Rinkevics, who floated the idea of taking AstraZeneca to court over the alleged breach of the vaccine supply schedule. The media outlet remarked, however, that the legal basis for such court action appears questionable.

Responding to the EU's tough rhetoric, the UK's Parliamentary Under-Secretary of State for COVID-19 Vaccine Deployment Nadhim Zahawi warned against any "vaccine nationalism" during his latest interview with Sky News.

"The European Union has always been highly protectionist", says Professor Darren Lilleker, lecturer and researcher in political communication at Bournemouth University. "I think the government and the supporters of Brexit have been a little bit naive in thinking that they would just be able to trade normally, and there'd be no problems with that, no barriers to trading".

The EU's stance is understandable given the huge amount of criticism focused on the union for the way it dealt with the first wave of the virus, according to Lilleker: Brussels didn't really have any procedures in place, and didn't provide any support or coordination for countries which were dealing with the outbreak largely on their own. As a result, politically the bloc is now "under pressure to deliver in a way that people can see that it's doing something", the professor believes.

"I suppose, Britain has been lucky in a way of developing its own vaccine with [Oxford], the problem there is production," he says. "But one can expect that any country or any group of countries and union of countries will do its best to protect its own people."

© AP Photo / Alberto Pezzali
Brexit supporters hold the Union Jack with a text reading "Goodbye EU" as they celebrate next to a person wearing the EU flag in London, Friday, Jan. 31, 2020

'Britain Has to Accept That Things Have Changed After Brexit'

The politicisation of the vaccine issue threatens to further sour relations between the EU and the UK, which are already at odds over Brexit red tape problems and controversy surrounding the Northern Ireland Protocol provisions. On the other hand, the EU's potential restrictions with regard to delivery of the coronavirus vaccine by Pfizer, a US pharma giant, to the UK might theoretically spark a spat with Washington.

The future of EU-UK relations is largely dependent on the good will of the bloc's member states, not its bureaucracy, believes Darren Lilleker: "If France, Germany, in particular, Italy, and Spain still want to trade with Britain, still want to maintain a relationship, they have the influence and power to put pressure on the European Union to have a good agreement," he highlights.

For its part, Britain has to accept that things have changed and can’t expect them to go back to normal, "but maintain the relationships with the individual nations as well as with the European Union as best as possible", the academic notes, acknowledging, however, that the European Union "is very, very monolithic, very strict in sticking to certain rules and processes".

When it comes to Washington's reaction to the UK-EU row over Pfizer's supplies, one should not overestimate the Biden administration's adherence to British-American "special relationship", the professor deems. First, Biden's White House has "far greater problems of its own"; second, it may wish to have a good working relationship with the EU, which is now far more economically powerful than the UK; third, following Brexit the UK is no longer "an advocate for the US within the EU".

"With Biden’s affection for Ireland and the issues Brexit poses to the island of Ireland, the UK may not be in that strong a position in the eyes of the US," Lilleker concludes.