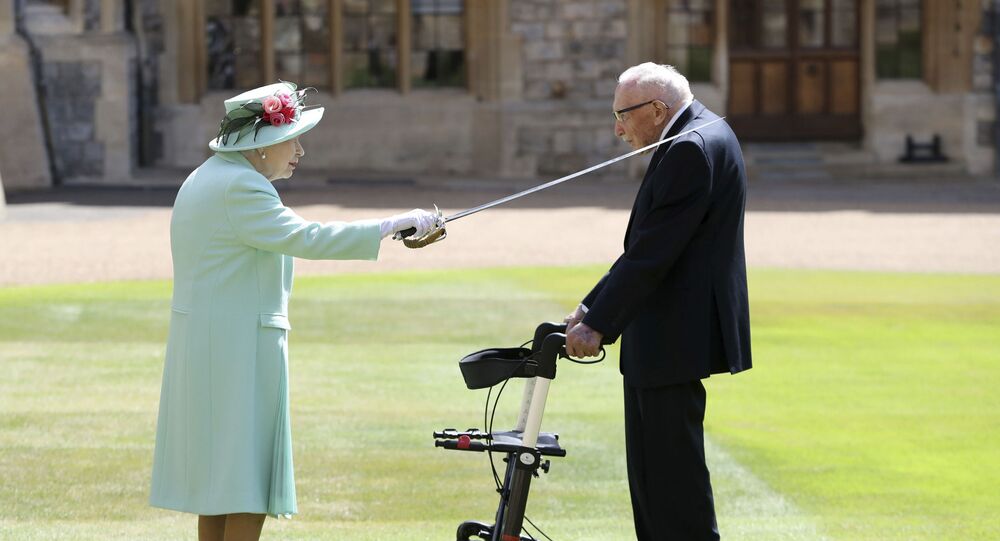 Captain Tom Moore was nominated for knighthood by Prime Minister Boris Johnson in May for raising millions of pounds through a Just Giving campaign to raise funds for NHS Charities Together. His knighthood ceremony at Windsor Castle is the first public engagement the Queen has done in person since lockdown.

The 100-year-old former British army officer received this honour after raising almost £33 million for NHS Charities Together by completing 100 laps of his garden before his 100th birthday using his walking frame.

Today The Queen conferred the Honour of Knighthood on @captaintommoore at an Investiture at #WindsorCastle. pic.twitter.com/hukR1jAc8Y

​This was the Queen’s first official engagement since lockdown and Buckingham Palace believe this is the first ceremony that has been held in a socially distanced format.

Other royal engagements at Buckingham Palace and Holyrood Palace had been put on hold for June and July, due to the pandemic, but a special exception was made for Captain Sir Tom Moore.

The Queen used the sword belonging to her father King George VI to bestow the veteran’s knighthood upon him.

The Queen personally praised Captain Sir Tom saying, "Thank you so much, an amazing amount of money you raised."

The knighted veteran said it was the most special day for him.

He tweeted earlier this morning saying he was “raring to go.”

Good Morning! Ready and raring to go for what is a very special day. Thank you for all the well wishes, as ever, overwhelmed by your support.#todaywillbeagoodday pic.twitter.com/JgLD0O0suI

​Earlier on Friday the Queen attended the unannounced wedding of her granddaughter Princess Beatrice to Edoardo Mapelli Mozzi in a nearby chapel.