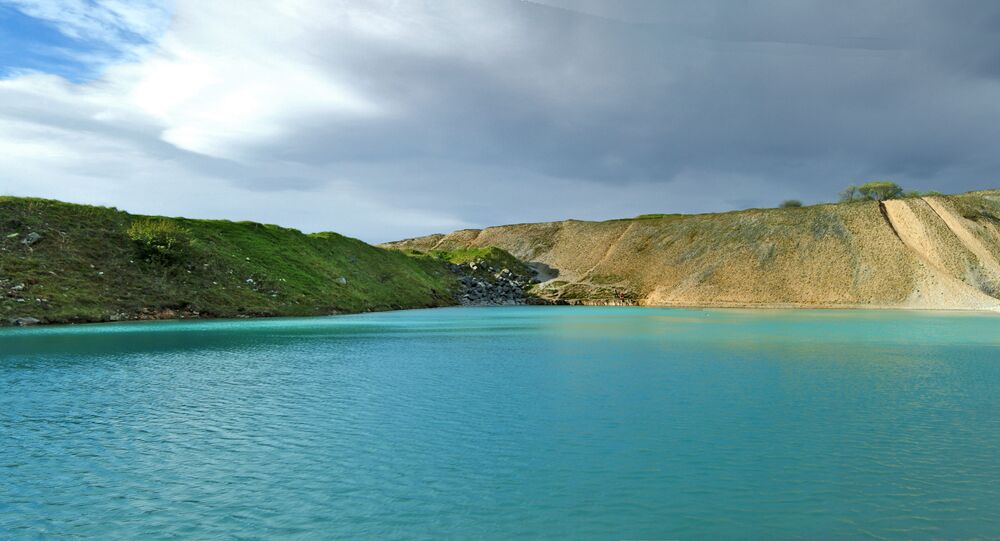 A former quarry in Buxton, UK may look like a perfect tourist attraction for those who are willing to enjoy sky blue waters and share Insta snaps with their followers. In reality, the place is a toxic lime dump that can cost its visitors not only their health, but sometimes even their lives.

The infamous but nevertheless highly popular Blue Lagoon in Harpur Hill village has now been dyed black by local authorities to prevent day-trippers from coming to the dangerous spot, Derbyshire Live reported. What is officially known as Hoffman Quarry, is located near Buxton, UK; the place normally attracts thousands of visitors with its celestial waters despite in fact being a toxic pit filled with old cars, excrement and animal remains.

I discovered the blue black lagoon aka harpur hill quarry lake in 2015 while doing research for the never-released video series Morley's Northern Treasures. the 'lagoon' is full of runoff from a limestone quarry providing an azure sheen and a ph level like swimming in ammonia. pic.twitter.com/yeGOjq2VMN

The situation with tourist flow dramatically escalated during the last Bank Holiday, as nearly 2,000 people rushed to the village, blocking the road and leaving tonnes of rubbish behind, according to the outlet. Local residents raised their complaints to authorities, who decided to address the situation by dying the water black this Friday, while also reinstalling warning signs and preventing people from parking in the area.

So @DerbysPolice about this ‘blue lagoon’ situation in Harpur Hill that you continue to skate around? We have also had a nasty crash on the Grinlow road today, conincidence? pic.twitter.com/ntwZciiWRw

“Last weekend a significant number of people visited the quarry and this caused a number of issues for local residents,” said Executive Councillor for the Environment and Community Safety Jean Todd from the High Peak Borough Council, which paid for the initiative. “This is unacceptable and, together with our partners, we're working to put in place measures to try and avoid a repeat this weekend.”

“Measures to make the quarry itself less attractive, including dyeing the water, are also taking place. This has been done before and achieved good results,” he added.

With warm weather expected this weekend people are being warned to stay out of the toxic water at the 'blue lagoon'. It's not a visitor attraction and people shouldn't visit #StaySafehttps://t.co/eQvNAmKqQv pic.twitter.com/nPvub3DZXE

The blue-going-black measure has indeed been used since 2012. The last time it was implemented was this March as holiday-goers rushed to the spot to swim in sky-blue waters and to put some shots of the attraction on their social media feeds. However, the authorities note that visitors always forget, allured by the quarry’s beautiful waters, that the insides of the dump are a freezing cold cocktail of chemicals that can not only cause allergic shock and skin’s irritation but even sometimes lead to death.

“By swimming or even playing in or close to any water you are putting your life at risk,” warns Paul Hawker, group manager from Derbyshire Fire and Rescue, the municipal authorities responsible for the “black waters” initiative.

Far from a visitor attraction, the toxic water on private land at #HarpurHill #Buxton has now had further measures put in place to stop people trespassing:

“Open water, such as Hoffman Quarry in Harpur Hill, remains cold no matter how hot the weather is,” the official explained. “This means your body can quickly go into cold water shock, causing your heart rate to quicken; you start to gasp for breath and you can quickly become confused and disoriented, meaning the chances of drowning increase dramatically even for the strongest of swimmers.”

Keep away from blue lagoon Buxton it’s a toxic dump not a swimming Pool!This is the Tories fault #ToriesOut people going to toilet in residents gardens even camping the night .Drug parafanalia killed 2 dogs this week pic.twitter.com/SbtUcprvT4

Hawker also said that the water in the so-called Blue Lagoon is “similar in PH value to bleach”, which is definitely not the best advert for a swimming destination, as there are also many “hidden dangers” underneath the pit’s surface.

“The quarry is not a place to swim and it is certainly not a tourist attraction that anyone should be visiting. Our message is quite clear, stay away and stay safe,” the group manager concluded.