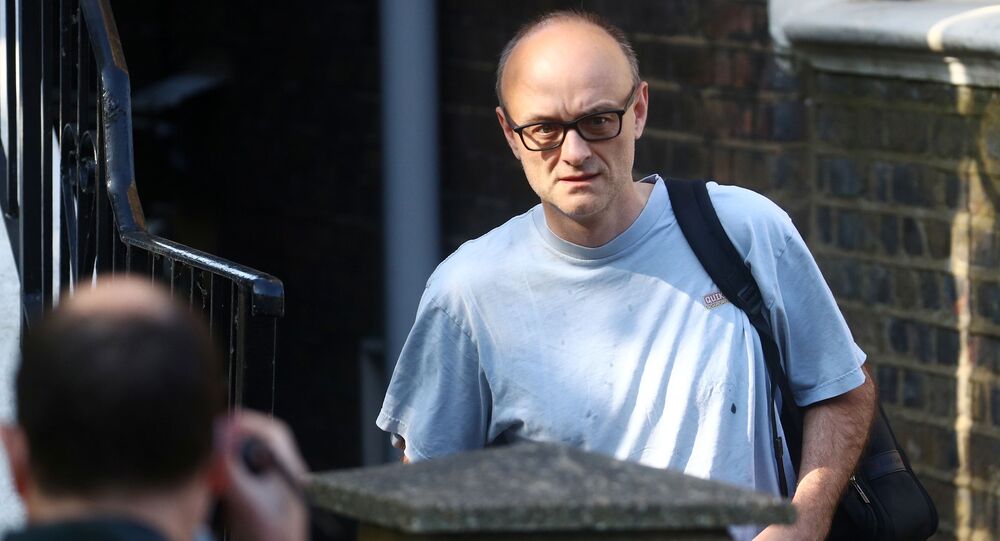 On Wednesday UK Prime Minister Boris Johnson urged Britain to "move on" from the controversy surrounding his chief advisor Dominic Cummings, who is accused of violating the government's own social distancing guidelines and breaking coronavirus lockdown regulations.

Despite Prime Minister Boris Johnson staunchly defending his chief adviser Dominic Cummings, the controversy surrounding the latter’s drive to his parents’ estate in Durham while fearing he and his wife might have COVID-19, and reports that senior ministers have been breaking ranks over the incident continues to dominate the front pages of UK newspapers, along with the new government-touted test-and-trace scheme.

​The Guardian makes reference to the Prime Minister’s call on Wednesday to “move on” from the Cummings scandal, and growing pressure on Boris Johnson within the Tory ranks over his refusal to sack his chief adviser, writing:

“Tories defy PM to pile pressure on Cummings”, including 61 MPs who are refusing to heed Boris Johnson’s calls to “move on”.

The paper highlights that two among the chorus of voices expressing their condemnation are government whips, in addition to Penny Mordaunt, now the paymaster general.

According to the frustrated officials, despite attempts by Dominic Cummings to lay out his reasons for violating stay-at-home guidelines in an appearance before the press at the Rose Garden of No. 10 Downing Street, there are “inconsistencies” in his account of the drive to Durham.

BBC’s Newsnight presenter Emily Maitlis is also mentioned in The Guardian after she was replaced on Wednesday, with a statement by the broadcaster claiming she had violated impartiality rules on Tuesday’s programme. The host had gone on a rant against Dominic Cummings, insisting he had broken lockdown rules and “the country can see that and is shocked the government cannot”.

Subsequently, programme editor Esme Wren went on Twitter to say that Maitlis “hasn’t been replaced tonight in response to the BBC statement”.

Emily Maitlis found her way into a headline in The Telegraph, which reads:

The paper accompanies the headline with a large picture of the TV presenter. The Dominic Cummings scandal is featured in a story by the paper’s political editor, Gordon Rayner, under the headline:

“Boris Johnson says it is 'time to move on' as he rejects inquiry into Dominic Cummings”.

The Telegraph focuses on the launching on Thursday of the NHS Test and Trace service, which is central to the government’s coronavirus recovery strategy.

Anyone with symptoms will be tested and their close contacts will be traced, with those who have been in close contact with someone testing positive for COVID-19 required to isolate for 14 days, even if they have no symptoms, to avoid spreading the virus, with the government confirming its test-and-trace scheme will be voluntary.

​The Financial Times also threw the spotlight on the Prime Minister’s defence of his chief adviser, its headline reading: “Johnson brushes aside Cummings inquiry demands despite backlash”. The sub headline is “Blame shifted for pandemic failings”.

​Dominic Cummings is the prime target of The Mirror, which jointly broke the scandalous story surrounding his drive to his parents’ estate while displaying coronavirus symptoms with The Guardian.

Splashing a picture of the PM’s adviser across the front page along with Boris Johnson, the paper brandishes the headline:

Referring to the lockdown rules which the public had been called upon to observe for the sake of saving human lives amid the pandemic, it says:

“Government tells the public to do “civic duty” to curb virus but PM still backs the aide who broke the rules”.

Thursday’s TIMES: “Do your duty and we can defeat virus, Britain told” #BBCPapers #TomorrowsPapersToday pic.twitter.com/C89wxA7TOn

The Times takes a two-pronged approach, leading on the new test-and-trace policy being introduced by the government to identify, contain and control the spread of COVID-19:

“Do your duty and we can defeat virus, Britain told.”

The Metro gives prominence to Boris Johnson’s adamant defence of his adviser Cummings, writing that the Prime Minister is “Zooming Fuming”.

According to the paper, Johnson “sticks by Cummings as he’s grilled by furious MPs”.

The Express runs with the news that as of Thursday, anyone who tests positive for coronavirus will be contacted by NHS Test and Trace, and required to share information about their recent interactions. Under the headline “Test and Trace: Key to our freedom”, it reports that UK Health Secretary Matt Hancock urges Britons to do their “civic duty” to “thwart the virus”.

The Daily Mail breaks ranks with other papers and eschews the Dominic Cummings scandal, its front page instead focusing on the “Test & trace revolution”.

It emphasises the fact that in line with the new strategy, anyone in close contact with a COVID-19 patient will be told to self-isolate for 14 days “even if they don’t have symptoms”.

Boris Johnson has faced a backlash after defending his chief adviser, Dominic Cummings, who allegedly broke social-distancing restrictions twice, having driven to County Durham, to his parents’ estate, despite suspecting that both he and his wife had COVID-19, at a time when lockdown rules banned non-essential trips. Later he also took a trip to a local beauty spot - Barnard Castle.

The Prime Minister insisted during his Sunday Press Conference that some media reports around the incident were "palpably false".

According to Cummings, he felt compelled to drive to Durham to arrange for possible back-up childcare from his teenage niece, once he realised he and his wife were showing coronavirus symptoms.

The adviser claims he and his wife and child stayed in a separate building and communicated with his parents from a distance, by shouting.

Lockdown rules require anyone showing symptoms of coronavirus to stay in their home and avoid all contact.

'Shame on You!' Protesters Meet Dominic Cummings With Chants in Front of His Home in London - Video