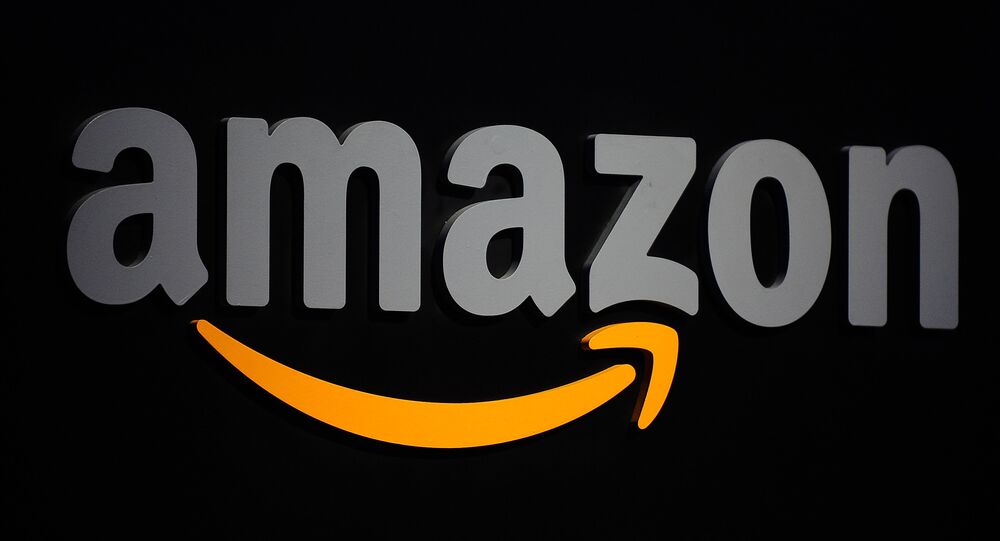 Earlier, reports of coronavirus testing targets falling short of the pledged 25,000 tests a day “within four weeks” as of 18 March triggered finger-pointing, with the government blaming “a lack of demand” among NHS staff.

A pilot programme of COVID-19 self-testing kits "using Amazon logistics" is reportedly about to be launched in the UK, writes the Times.

According to the outlet, throat swabs will be delivered to homes, with the sample recovered an hour later, as the results are subsequently announced via text message.

The entire test, which is understood to be different from earlier planned home testing for coronavirus antibodies, may be completed in under 48 hours.

© AFP 2021 / LEON NEAL
A picture shows the logo of the online retailer Amazon dispalyed on computer screens in London on December 11, 2014

The meeting comes as the Institute of Biomedical Science (IBMS) has deplored the fact that NHS laboratories are still struggling to ramp up COVID-19 testing due to a shortage of kits and reagents.

© AP Photo / John Minchillo
A laboratory technician prepares COVID-19 patient samples for semi-automatic testing at Northwell Health Labs, Wednesday, March 11, 2020, in Lake Success, N.Y. The US Food and Drug Administration has approved faster testing protocols as the viral outbreak continues to spread worldwide. For most people, the new coronavirus causes only mild or moderate symptoms. For some it can cause more severe illness

“The 17,000 NHS laboratory workers that I represent are increasingly expressing their frustration. They have applied themselves innovatively to increase COVID-19 testing capacity and have the platforms ready so that the NHS laboratories are able to meet the Secretary of State's ambitious target, but they are still not able to source the testing kits and reagents they require,” said IBMS president Allan Wilson in a statement.

Wilson questioned the government’s pledge to carry out 100,000 tests a day, adding:

"It concerns me when I see significant investments being made in mass testing centres that are planning to conduct 75,000 of the 100,000 tests a day, these facilities would be a welcome resource and take pressure off the NHS if the issue around testing was one of capacity… However, we are clear that it is a global supply shortage holding biomedical scientists back, not a lack of capacity."

The IBMS head voiced concern that NHS testing might potentially plummet if labs had to compete with big testing centres for coronavirus testing kits and reagents "in a Wild West testing scenario".

As he emphasized that there were currently two testing routes available, with one overseen by “qualified Health and Care Professions Council (HCPC) registered biomedical scientists working in heavily regulated United Kingdom Accreditation Services (UKAS) accredited laboratories”, while the other is offered by chiefly volunteer “unregistered staff in unaccredited laboratories”, Wilson concluded:

"The UK must avoid this for the sake of patient safety.”

On Thursday the Prime Minister's official spokesman said that 15,994 tests were carried out across England, Scotland and Wales during the 24 hours up to 9 am on 15 April, adding the country is currently in a position to conduct 35,000 coronavirus tests daily, including 20,771 in public facilities and 14,300 through commercial testing.

However, less than half that numbers are currently being reached.

“We have been very clear that where there is spare capacity available that should be used on NHS staff, on their families, and in social care," the spokesman was quoted as saying.

Current developments come as on 16 April lockdown measures were extended in the country, which currently has over 104,100 registered COVID-19 cases, with 13,700 people having died of the respiratory disease, according to data from the Johns Hopkins University.

First Secretary of State Dominic Raab, who is deputising for Prime Minister Boris Johnson who is recovering from the coronavirus, spoke at a daily No 10 briefing to underscore the “light at the end of the tunnel”, yet warned of rushing to relax the protocols in place over the COVID-19 pandemic.

"If we rush to relax the measures that we have in place we would risk wasting all the sacrifices and all the progress that has been made. That would risk a quick return to another lockdown with all the threat to life that a second peak to the virus would bring and all the economic damage that a second lockdown would carry," said Raab.