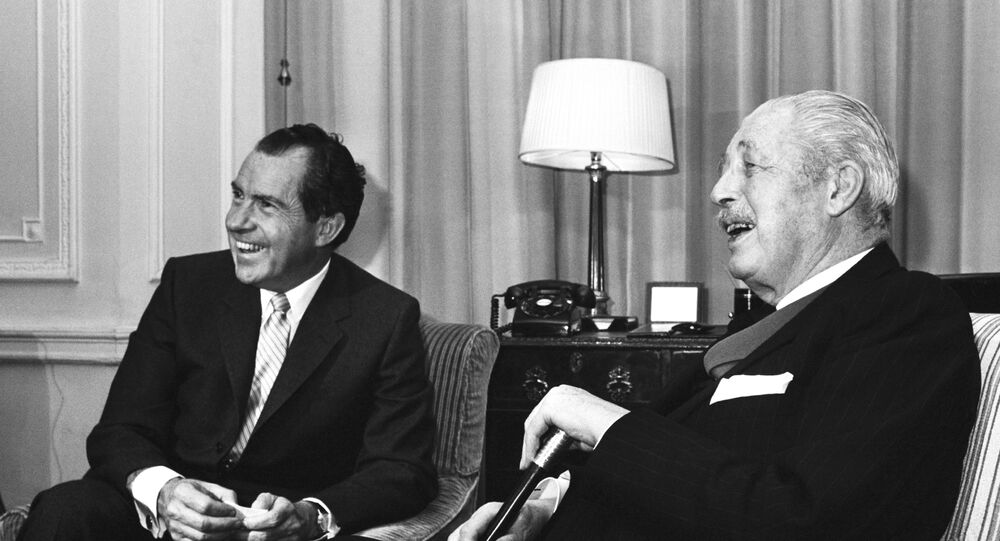 From Macmillan to Johnson: UK Prime Ministers Who Have Faced a Health Crisis

British Prime Minister Boris Johnson spent Monday night in the intensive care unit of a London hospital 10 days after he was diagnosed with the COVID-19 coronavirus. So is this the first time a UK prime minister’s health has affected his ability to rule?

Boris Johnson - who was admitted to St. Thomas's Hospital in central London on Sunday, 5 April, is the first major world leader to be confirmed to have the virus.

On Monday night, in an almost unprecedented move, he handed over the running of the government to Foreign Secretary Dominic Raab.

On Tuesday, 7 April, Cabinet Office minister Michael Gove said Johnson was receiving oxygen but insisted: "The prime minister is not on a ventilator."

Important to remember so many people are going through what Boris Johnson is going through right now & so many families are desperately hoping their loved ones make it through. If you’re religious, say a prayer for them all. If you’re not, wish them luck.
We’re in this together.

​Johnson's pregnant fiancee, Carrie Symonds, is herself recovering from the coronavirus, which first arrived in Britain in February.

Since then 5,373 people have died and more than 50,000 have been infected, although it is widely believed that those figures under-estimate the true scale of the devastation wrought by the virus.

In 1957 Harold Macmillan took over as Prime Minister after Anthony Eden fell on his sword following the disaster of the Suez Crisis, when British troops were forced to withdraw from the Suez Canal and hand it back to Egypt’s President Gamal Abdel Nasser under political pressure from the US.

Macmillan resurrected the Conservative Party’s fortunes, winning an election in 1959 and as he rode a booming economy he famously told the voters they had “never had it so good.”

But in October 1963, as he prepared to travel up to Blackpool to address the party conference, Macmillan was struck down with severe pain.

He was operated on at 11.30am on 10 October, amid feverish rumours in Westminster that he had inoperable prostate cancer.

In fact Macmillan had already been told by his doctor, Sir John Richardson, it was a benign tumour and he would be able to leave hospital within ten days.

But Macmillan saw it as an opportunity to bail out with his reputation intact after six good years.

So on the afternoon of 10 October the Foreign Secretary, Sir Alec Douglas-Home, read a letter out to the stunned  conference hall in Blackpool.

​It was Macmillan’s resignation letter, in which he told his supporters “it will not be possible for me to carry the physical burden of leading the party at the next next election”.

There then began an unofficial leadership contest with Quintin Hogg, aka Lord Hailsham, making a slightly embarrassing power grab in Blackpool.

Macmillan, convalescing in his hospital bed, said Lord Hailsham has “put himself out of court by his stupid behaviour.”

The two most obvious contenders were the Deputy Prime Minister, Rab Butler, and the Chancellor of the Exchequer, Reginald Maudling.

But both gave speeches which were badly received by the party faithful and Douglas-Home became prime minister, although he lost power the following year when the Labour Party won the general election.

When Prime Minister Harold Wilson suddenly resigned on 16 March 1976 - five days after his 60th birthday - the Labour Party and the country were stunned.

He told his confidantes he was mentally and physically exhausted, and handed over the reigns of power to Foreign Secretary Jim Callaghan, who defeated Michael Foot and Roy Jenkins in a leadership election.

​Callaghan would lose power in 1979, swept away in a general election landslide by Margaret Thatcher.

But in 2008 Dr Peter Garrard, a Reader in Neurology at the University of Southampton School of Medicine, claimed he had detected the early signs of Alzheimer’s Disease in Wilson’s speech in his final months in Downing Street.

He concludes that the onset of the disease - which although first described in 1906 was not widely known about in the 1970s - could have contributed to Wilson's decision to step down.

Wilson, who stepped down as Labour MP for Huyton on Merseyside in 1979, was diagnosed with Alzheimer’s long before his death in 1995.

While it does not compare to the situation with Boris Johnson, the political establishment was thrown into panic on 20 October 2003 when it was announced that the Prime Minister Tony Blair had suffered a heart scare.

Blair was relaxing at Chequers, the prime minister’s official country residence in Buckinghamshire, when he suffered pains in his heart.

He was rushed to the acute department at nearby Stoke Mandeville Hospital and spent five hours under treatment for cardiac arrhythmia, or irregular heartbeat.

Blair underwent a cardioversion - an electric shock which restores the normal heart rhythm.

He was allowed home with orders to rest for at least 24 hours and his place at the European Union summit was taken by Foreign Secretary Jack Straw.

Blair’s health did not trouble him again and he won a historic third successive election in 2005, before handing over to Gordon Brown two years later.

In September 1918 David Lloyd-George caught Spanish influenza while mingling with crowds of soldiers and munitions workers in Manchester as they celebrated victory in the First World War.

He spent 11 days in hospital and was on a ventilator for much of that time but recovered and lived until the ripe old age of 82.

Spanish influenza - the name was misleading as it did not originate in Spain - killed 200,000 people in Britain and millions around the world between 1918 and 1919.

Sir Winston Churchill suffered a mild heart attack in 1941 while at the White House and contracted pneumonia two years later but he refused to give up the reigns of power and led Britain to victory in the Second World War in 1945.

Anthony Eden, who succeeded Churchill, had suffered from a stress-related ulcer for decades and after a bungled operation in 1953 he remained in pain for years afterwards and required more surgery.

He was prescribed benzedrine - a stimulant which is designed reduce tiredness - but side effects of the drug are insomnia and mood swings, and these have been blamed for his poor performance during the 1956 Suez Crisis, which led to him resigning the following year.