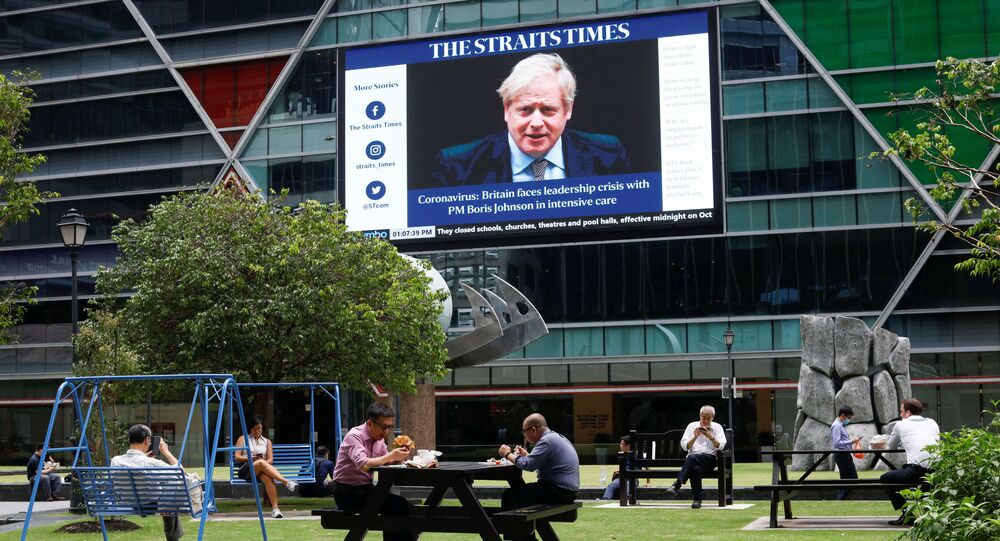 UK PM is Receiving Standard Oxygen Treatment, Breathing Without Any Other Assistance - Spokesman

The head of the UK government was admitted to St. Thomas Hospital in London earlier this week, as his condition has not improved since he was diagnosed with coronavirus last month.

UK Foreign Minister Dominic Raab has stated that Prime Minister Boris Johnson is breathing without assistance but is continuing to be monitored.

Earlier in the day, the UK prime minister's spokesman told reporters Boris Johnson was receiving standard oxygen treatment and was breathing without any other assistance.

"The prime minister has been stable overnight and remains in good spirits. He is receiving standard oxygen treatment and breathing without any other assistance. He has not required mechanical ventilation, or non-invasive respiratory support", the spokesman said.

The spokesman continued on by saying that if Secretary of State for Foreign Affairs Dominic Raab is incapacitated, Finance Minister Rishi Sunak would take on the PM's responsibilities.

Prior to that, Cabinet Office Minister Michael Gove said that Boris Johnson was not put on a ventilator, however, he has been given some oxygen support. According to him, the prime minister is "full of life and fit", and the government will issue a statement when his condition changes.

"He's not on a ventilator no", Gove told LBC radio. "The prime minister has received some oxygen support and he is kept under, of course, close supervision".

The minister also noted he was not aware if Johnson had been diagnosed with pneumonia.

At the moment, Foreign Secretary Dominic Raab is presiding over cabinet meetings and also overseeing the nation's fight against the coronavirus, while Johnson is fighting for his own life. Johnson, however, is still in charge of the government and is issuing directions when needed, according to a cabinet statement.

World leaders have expressed their support for the British PM, wishing him a speedy recovery, with US President Donald Trump even saying he has asked American pharma companies to help British medics in Johnson's treatment.

In the meantime, the United Kingdom has reported over 51,000 cases of COVID-19, and the death toll in the country has reached 5,373.