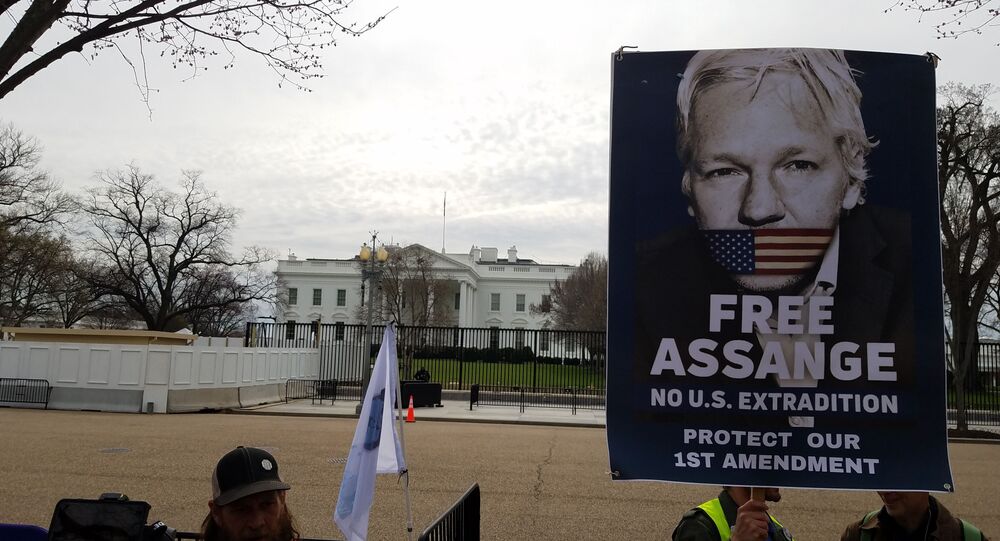 In 2017 Republican congressman Dana Rohrabacher reached out to Julian Assange to offer a pardon to the WikiLeaks publisher, if he could prove Russia wasn’t involved in the DNC Leaks. Rohrabacher and US President Donald Trump have both since stated that the offer wasn't on Trump's behalf.

US president Donald Trump was “aware of” and “approved of” the discussion of a pardon between US ex-congressman Dana Rohrabacher and WikiLeaks founder Julian Assange. This is what Rohrabacher and Charles Johnson, who is closely associated with the US president, told Assange and his lawyer Jennifer Robinson during a discussion in the Ecuadorian embassy in 2017,  according to a witness statement signed by Robinson.

Edward Fitzgerald QC, acting on behalf of Assange’s defence team, articulated the key claims of Robinsons’s statement during the second half of the extradition hearing held on 24 February at Belmarsh Magistrate’s Court (sitting at Woolwich Crown Court).

“[T]he proposal put forward by Congressman Rohrabacher was that Mr Assange identify the source for the 2016 election publications in return for some kind of pardon, assurance or agreement which would both benefit President Trump politically and prevent US Indictment and extradition”, Robinson’s witness statement says.

Fitzgerald argued that this conversation of a pardon, if it indeed had the approval of the US president, shows that Trump “had been prepared to use the threat of prosecution as a means of extortion to obtain personal political advantage from Mr Assange”. This is submitted by the defence as further evidence of “bad faith” and “abuse of process” which they say goes to the heart of the prosecution against Assange.

Assange has never revealed the source of the DNC Leaks, though, in 2016, well before this offer was made, Assange confirmed the source was not a state actor.

It is important to note that Robinsons’s statement doesn’t allege that the pardon offer was at “the instruction” of the US president, nor is it suggested that Assange was being encouraged to lie or otherwise concealevidence of  any alleged involvement of the Russian state or any other actor in the affair. It would therefore appear that Fitzgerald misspoke on 19 February when he told Westminster Magistrates’ Court that Robinson’s witness statement alleged that Rohrabacher offered a pardon to Assange “on the instructions of the president”.

As Sputnik reported previously, Assange had already publicly confirmed, in December 2016, that neither the Russian state nor any other state actor was his source for the DNC Leaks. Furthermore, ex-US diplomat, whistleblower, and friend of Assange Craig Murray, confirmed that he discovered the identity of the source of the leaks which he described as coming from “official circles in Washington DC”.

“I know it’s been denied by Rohrabacher, he proclaims now he was acting on his own initiative, but whether that’s true or not he stated something definitely otherwise in the meeting according to Jennifer Robinson. And I will be inclined to believe her rather than Rohrabacher or even Donald Trump who denies everything of the nature… It is very important to understand… [this] was an offer for clemency, of pardon, in exchange for identifying or exposing the source of the DNC publications of 2016. That’s a totally different thing from what has been reported [in the press].”

Hrafnsson made clear that Assange ultimately declined the offer and refused to reveal his source, as any 'proper journalist' would.

Krstinn Hrafnsson (@khrafnsson) Editor-In-Chief at WikiLeaks sets the record straight on the significance of the Rohrabacher-#Assange "pardon offer" discussion and how the mainstream press have not reported on correctly. pic.twitter.com/kA7PSJ9vwX

​The hearings will last all week and then will adjourn until May when they will be reinitiated for a further three weeks. If Assange is extradited to be tried in the US on espionage charges he will face 175 years in prison. All the charges relate to his role in publishing the Iraq and Afghanistan war logs, Guantanamo Bay detainee files, and the Diplomatic Cables, which revealed war crimes and other criminality and abuse committed by the US government and US-led forces.