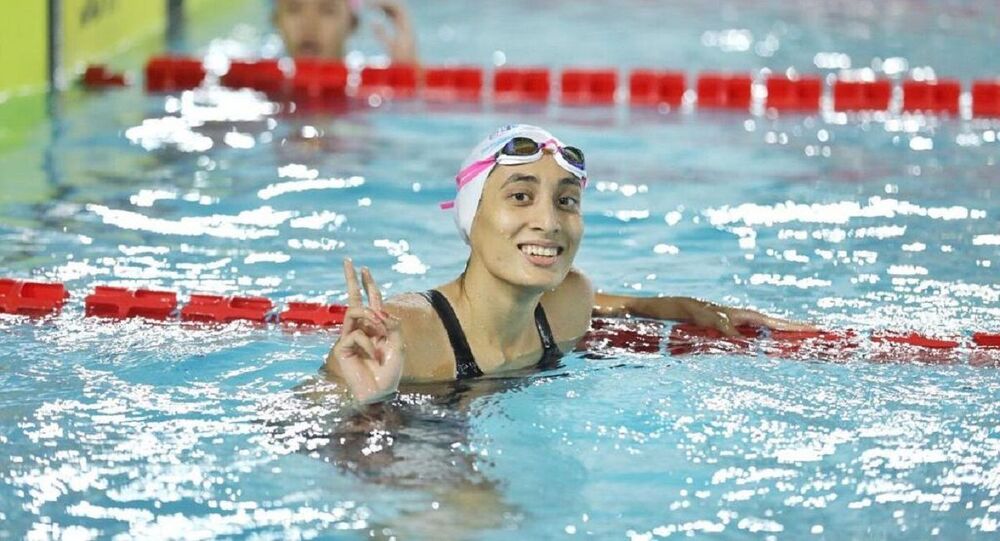 ‘Michael Phelps Made Me Believe in Myself', Says Indian Swimmer Maana Patel Before Olympic Debut

Maana Patel is the first Indian female swimmer to qualify for the Olympics. The 21-year-old is all set to compete in the 100m backstroke event at the Tokyo Games set to commence with a low-key opening ceremony on 23 July.

Long before she made history by getting an opportunity to take part in the Tokyo Olympics, Indian swimmer Maana Patel says it was a chance encounter with US swimming idol Michael Phelps which transformed her approach to a life in sport.

After suffering a career-threatening shoulder injury in 2017, Patel's hopes of getting back in the pool were diminishing day-by-day. But a meeting with Phelps in 2019 gave her dreams a new buoyancy.

Patel was 13 when she broke Shikha Tandon's long-standing national record in the 200m backstroke in 2009. Presently, she is preparing for her heats in the Olympics warm-up pool in Tokyo.

The 100m backstroke competition is scheduled to take place between 25 and 27 July in Tokyo.

Apart from her meeting with Phelps, Patel talked to Sputnik in an interview about what goals she has for Tokyo, her career's lowest point, why she is inspired by American female superstar Katie Ledecky and more.

Sputnik: You've already made history by becoming the first female swimmer India has sent to the Olympics. What's your main goal in Tokyo?

Maana Patel: I clocked 1:03 in Belgrade just before the Olympics and the target is to go 1:02 or lower in Tokyo. I really want to get in the 1.02 range at the Olympics, which I have never achieved in my career.

Sputnik: Who inspired you to become a swimmer in a country where it is not even considered a sport but a hobby?

Maana Patel: As I come from a non-sporting family, I never dreamt of becoming a swimmer. In fact, nobody in my family knew how to swim before I took it up. My father was actually scared of water until six years ago, when he learnt to swim. Unlike other sports stars, my parents never thought about introducing me to any sport, let alone swimming.

As a kid, I was very lanky and my appetite was very poor. That's when my mother decided to put me in a summer swimming batch in 2008. I started enjoying it and that's when I decided to become a swimmer.

Sputnik: Did any of the big names in swimming such as Phelps, Ledecky, Sarah Sjostrom or Stephanie Rice influence your decision to become a swimmer?

Maana Patel: Michael Phelps was my big, big idol. I used to watch Katie Ledecky and Sarah Sjostrom's races and feel like 'Oh, my god', they are so tall, they are so nicely built. So, I used to really, really love watching them swim.

Sputnik: You had the honour of meeting Michael Phelps in 2019. How was that?

Maana Patel: I was extremely lucky. He had come to Mumbai for an event and my sponsors gave me an opportunity to do an one-on-one chat with him. The funny part about our meeting was when he walked into the room and introduced himself - 'I am Michael Phelps', and I was like, why are you the one introducing yourself? My jaw dropped when he was so close to me.

I just told him about my injury and asked him how I could make a comeback from it and sought a few tips about getting better in the pool. He was quiet, listening patiently and smiling when I was speaking about my injury and he then says 'I have been through all this'.

He told me, 'You are so young, you still have time and you still have a lot of improvement. Just recover from the injury' and then he spoke about the technical aspect of my swimming and it motivated me a lot. That actually made me believe in myself again.

Sputnik: You have broken multiple national records and have also suffered a few setbacks. What has been the lowest point of your career?

Maana Patel: Until now, it's the injury I had in my left shoulder in 2017. I say 'the lowest' but I was very young then - I was just 17, and it was the first injury of my career and I hope the last.

I didn't know how to deal with it. Obviously the rehabilitation part was being taken care of. But the toughest part was to face the injury, how to stay focused at that time.

The injury took a toll on me mentally and emotionally. I was depressed for quite some time because that whole year I had to withdraw from all competitions. I had to stay away from the pool for a very, very long time and then start again from zero. So that whole process was very consuming and frustrating.

The second-lowest point of my career came in 2019, when I was disqualified from the 100m backstroke because of a flick start at the nationals and I was like 'How can I make such a mistake, how can I be disqualified?'