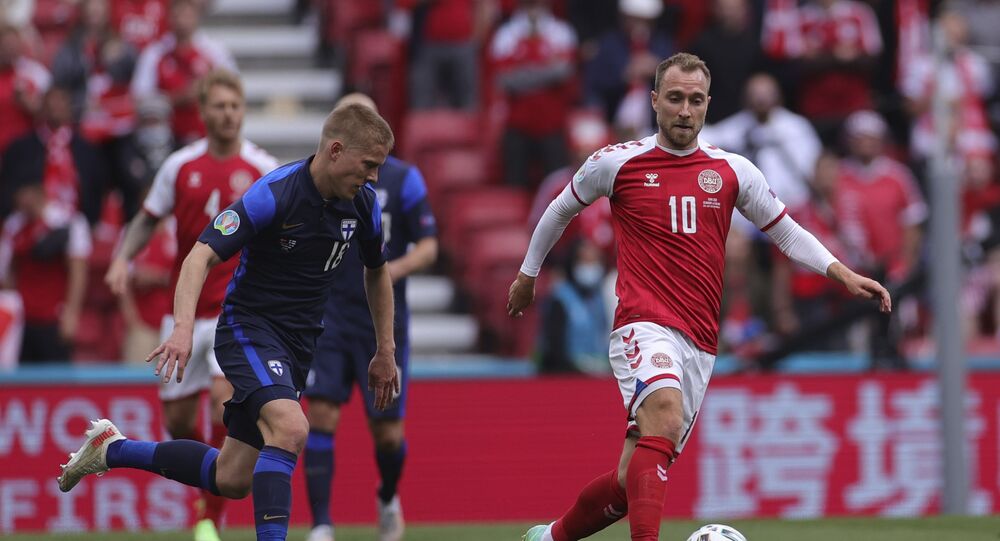 In 2012, during an FA Cup quarter-final against Tottenham, Fabrice Muamba suffered a cardiac arrest. His heart stopped beating for 78 minutes and he was forced to retire. He was 29, the same age as Christian Eriksen.

Christian Eriksen is recovering in a Danish hospital after he collapsed on the pitch during Denmark's opening Euro 2020 game against Finland but it is feared he will have to retire from football because of a heart condition.

Eriksen, 29, is in "stable condition" in Rigshospitalet, one of Copenhagen's best facilities, after suffering a cardiac arrest that could easily have killed him if it had not been for the rapid response of the pitchside medical team.

They raced onto the pitch and revived his heart with a defibrillator as his teammates stood around him in a protective cordon.

Sanjay Sharma, professor of sports cardiology at St George's University in London, said it was likely Eriksen would have to give up football.

Professor Sharma told The Independent: "I don't know whether he'll ever play football again. Without putting it too bluntly, he died today, albeit for a few minutes, but he did die and would the medical professional allow him to die again? The answer is no. I think the Football Association will be very strict about whether he plays again or not. In the UK he wouldn't play. We'd be very strict about it".

© AFP 2021 / FRIEDEMANN VOGEL
Denmark's players react as paramedics attend to Denmark's midfielder Christian Eriksen after he collapsed on the pitch during the UEFA EURO 2020 Group B football match between Denmark and Finland at the Parken Stadium in Copenhagen on June 12, 2021.

Eriksen had just helped Inter Milan win Italy's Serie A championship, but even if he physically recovers from the incident the club may find it hard to persuade a company to take the risk of insuring the player, and the same could be said for Denmark.

His partner Sabrina Kvist Jensen was in tears in Copenhagen's Parken Stadium on Saturday, 12 June, when Eriksen suddenly collapsed.

She is the mother of his two children and she may well exert pressure behind the scenes on him to retire, even if he receives medical advice that he can play on.

Denmark's team doctor Morten Boesen has confirmed Christian Eriksen suffered cardiac arrest and that "he was gone" before he was resuscitated.
Boesen says "we got him back after one defib. That's quite fast. ... How close were we? I don't know." #EURO2020

​There have been a handful of high-profile deaths of footballers by cardiac arrest in the last decade.

In 2003, midfielder Marc-Vivien Foé, 28, collapsed while playing for Cameroon in a Confederations Cup match in Lyon, France. He was taken off on a stretcher but attempts to restart his heart failed and he died in the stadium.

Four years later, Antonio Puerta, 22, collapsed while playing for Sevilla in the first game of the La Liga season against Getafe. He was able to walk off the pitch, but collapsed again in the changing rooms and died in hospital three days later.

Then in 2017, Cheik Tiote, 30, a former Premier League player and Ivory Coast international, collapsed and died while playing for his new team in Beijing, China.

The Eriksen incident put a black cloud over the Euro 2020 tournament on the weekend when it was feared he may have died and there was huge relief when it emerged that he had survived.

Christian Eriksen to Gazzetta dello Sport: "Thank you, I won't give up. I feel better now - but I want to understand what's happened. I want to say thank you all for what you did for me". Eriksen was talking to his manager who reported Chris sentences from the hospital. 🇩🇰 pic.twitter.com/anWUjcbEtP

​Scotland play their first game of the tournament on Monday, 15 June, against the Czech Republic and their captain Andy Robertson has praised the Danish players' response.

Robertson said: "The way the Danish players dealt with what must have been a heart-breaking thing for all of them, they stood up to it. That will be the picture I remember and everyone should remember because, when one of their friends was in a bad place, they stood up and protected him. Whatever else happens in this tournament, for me they will be the heroes".

Wembley—which while Spurs were away from White Hart Lane was Christian Eriksen's home stadium—sends its best 🙏 pic.twitter.com/7Q58NOeQjE

​UEFA eventually decided to restart the game and Finland went on to beat Denmark 1-0.

Former Denmark goalkeeper Peter Schmeichel, whose son Kasper's mistake led to the winning goal, criticised the decision to restart the match. He told the BBC: "It was a ridiculous decision by UEFA and they should have tried to work out a different scenario and show a bit of compassion and they didn't".

Fabrice Muamba, who retired from the game after suffering a cardiac arrest during a high-profile game in England in 2012, told Sky: "Regardless of who wins the tournament, it's that Christian is okay, he is healthy, if he can remember people which is even better news. That's what this Euros is about now, it's about making sure Christian can get home safe and help to build his recovery from there".