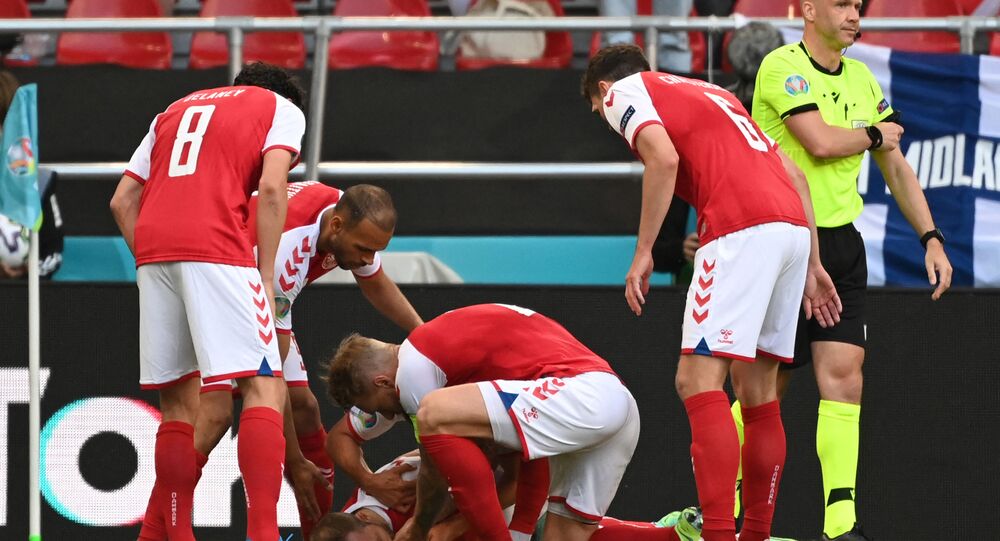 The midfielder collapsed on the pitch towards the end of the first half of a Euro 2020 game on 12 June. Earlier, the Danish team’s doctor said that the athlete was awake and in stable condition, but said that medical tests had provided no explanation for the incident.

Ex-Tottenham and Team Denmark star Christian Eriksen suffered a cardiac arrest during Saturday’s match against Finland, said Kasper Hjulmand, head coach of the Danish national football team. Eriksen "was gone" before he was resuscitated, said team doctor Morten Boesen. "We got him back after one defib. That’s quite fast".

Hjulmand said he had spoken with a smiling Eriksen via video link and that the midfielder was more concerned about his teammates, asking how they were doing. ''That's typical Christian", the Danish coach said.

As mentioned earlier, the incident occurred towards the end of the first half. Eriksen was running towards his teammate, who was making a throw-in, when he suddenly started stumbling and fell forward.

Warning: the following video contains scenes that may be disturbing to some viewers.

#ChristianEriksen collapse on the Field.

Thousands of fans fell silent in horror, while Eriksen’s teammates gathered around medics attempting to resuscitate him. Experts say the doctors' swift response as well as captain Simon Kjaer’s decision to clear the athlete’s airways saved him.

UEFA initially wanted to suspend the match. But after it became known that the athlete had come to and was in a stable condition, the two teams requested to continue playing. The football world responded to the incident with heart-warming support for the athlete and the Danish football team. During halftime, Danish and Finnish fans shouted Eriksen’s name.

Finnish fans chanting “Christian” and the Danes responding with “Eriksen.”

This should be the spirit of any sport and more: Fair Play & Togetherness.

​Beligum star Romelu Lukaku, who plays with Eriksen in Inter Milan, dedicated his goals to his teammate, saying to the cameras: "Chris, I love you."

​Tottenham’s Son Heung-min also paid tribute to his ex-teammate after scoring a goal.

Son Heung-min ran to the camera to dedicate his goal to Christian Eriksen. 🇰🇷🇩🇰#AsianQualifiers pic.twitter.com/Lqj79LoW4Y

Meanwhile, a leading cardiologist said that the midfielder is unlikely to play football professionally again. Sanjay Sharma, professor of sports cardiology at St George's University in London, said he had previously worked with Eriksen and that his physical tests were good.

"Clearly something went terribly wrong. How do you explain this cardiac arrest", Sharma said.

Christian Eriksen played in Tottenham for seven years before moving to Inter Milan. This year he helped the club win their first title in Serie A in 11 years.