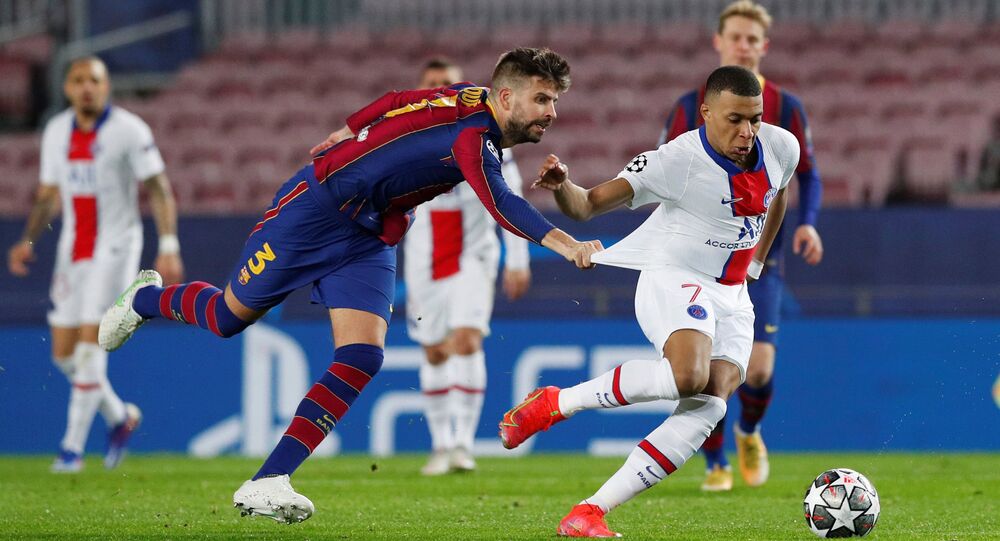 A heated, expletive-laced dialogue between Gerard Pique, Spanish centre-back for FC Barcelona, and Antoine Griezmann, a French footballer playing as forward for the club, was reportedly picked up by television microphones during the Champions League faceoff with Paris Saint-Germain.

Piqué: “No, your mother’s c**t, we are suffering and running like crazy people.”

​During the matchup on Tuesday, which Barcelona ceded to PSG 4-1, television pitch-side microphones reportedly caught the audio as Barcelona and PSG were still level, 1-1, with the French football club attacking in the 38th minute.

​Coming in the wake of a Lionel Messi penalty kick goal and Kylian Mbappe equaliser, the audio, translated by PSGtalk, reveals an irate Pique supposedly venting his anger at the team over lack of possession in the first-45. The ex-Manchester United footballer can be heard shouting:

At this point Griezmann, according to the outlet, is heard replying:

In reply, Pique parries with:

Griezmann hurls a "F*** you" at his teammate. Then Pique exclaims "No, f*** you. We're suffering and it's been like this for five minutes," with Griezmann yelling at him to stop shouting.

As Barcelona frantically scrambled to set up a defence, Pique once again slammed Griezmann:
"Motherf*****, we're running like crazy."

The spat was caught as PSG's 22-year-old Kylian Mbappe’s hat-trick helped the French club to a spectacular 4-1 win over Barcelona in their Champions League last 16, first leg at the Camp Nou.

”We are very pleased, it was a very important match for us. We wanted to come here and win and we have done it in style,” Mbappe told France’s RMC Sport afterwards.

He added that this was not the time for complacency as the second leg is to come in Paris on 10 March.