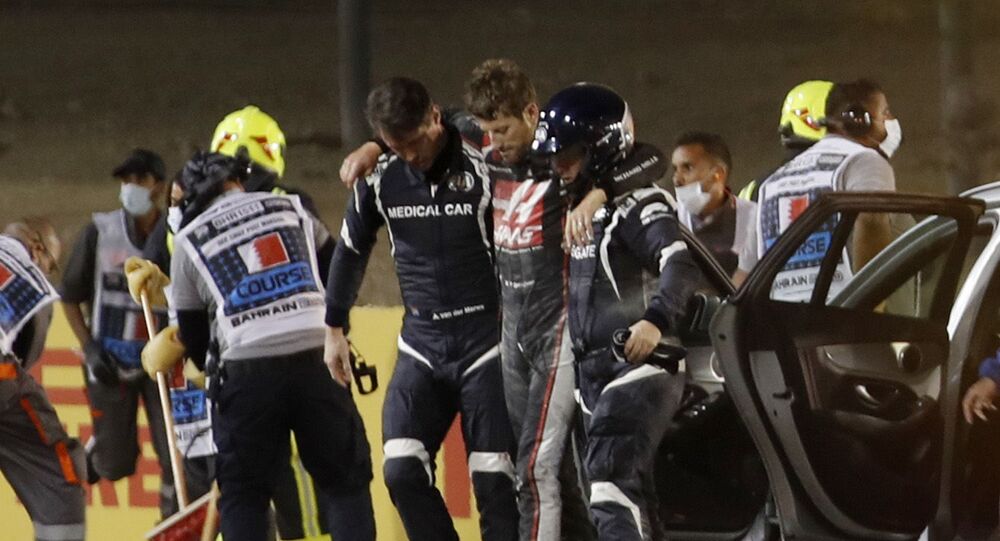 The Formula One driving series has had a history of deadly crashes since the competition first started; however, throughout the decades, organizers have increasingly improved safety measures, especially with the introduction of the halo system which largely prevented French driver Romain Grosjean’s death during a weekend race in Bahrain.

Grosjean, who is currently in his last season with the Haas F1 team, sat down for his first in-depth interview with French broadcaster TF1 on Tuesday and revealed that as he was trying to escape from his burning F1 car, he thought about his family and the 1976 crash that nearly claimed the life of former racer Niki Lauda.

The Frenchman’s life was instantly put in jeopardy on Sunday when he crashed in the opening lap of the Bahrain Grand Prix, striking the barrier at the exit of Turn 3 while going over 130 mph. Immediately upon impact, the Haas car erupted into flames as the vehicle was split in half and saw a portion of the car manage to wedge itself into the barrier.

"It felt much longer than 28 seconds,” Grosjean told the outlet, referring to the amount of time that it took him to exit the fiery crash. “I see my visor turning all orange, I see the flames on the left side of the car.”

“I thought about a lot of things – including Niki Lauda – and I thought that it wasn't possible to end up like that, not now. I couldn't finish my story in Formula 1 like that,” he added.

Lauda, a three-time F1 champion who died last year, is considered one of the greatest drivers in the history of the racing competition, but his involvement in the series almost came to an abrupt end when he crashed during the 1976 German Grand Prix. At the time, Lauda’s car burst into flames, ultimately placing the Austrian driver at death’s door after he suffered severe burns and inhaled toxic fumes.

Miraculously, Lauda managed to return to his Ferrari F1 team race-ready just a few weeks later, albeit with visible scarring to much of his face.

"I don't know if the word miracle exists or if it can be used, but in any case I would say it wasn't my time [to die]," Grosjean told the outlet, underscoring that thoughts of his family also motivated him to act quickly and remove himself from the wreck.

“For my children, I told myself that I had to get out. I put my hands in the fire, so I clearly felt it burning on the chassis. I got out, then I felt someone pulling on the suit, so I knew I was out.”

Video footage of the incident shows Grosjean hopping out of the burning car and over the barrier, coming in contact immediately with FIA doctor Ian Roberts and Medical Car driver Alan van der Merwe.

In the end, Grosjean reflected and indicated that the incident made him “more afraid for my family and friends, obviously my children who are my greatest source of pride and energy.”

“It's the biggest crash I've ever seen in my life. The car catching fire, exploding, and the battery that burst into flames too, so it added a lot of energy to the impact,” he added. “I think there’s going to be some psychological work to be done because I really saw death coming.”

However devastating the accident was, the French driver isn’t stepping away from the track. Grosjean told TF1 that he hopes to jump back into the car in time for the Abu Dhabi Grand Prix weekend, which is scheduled to start on December 11.

"It was almost like a second birth. To come out of the flames that day is something that will mark my life forever,” he said.

According to Guenther Steiner, the Haas team principal, Grosjean isn’t expected to be released from a Bahraini military hospital until Wednesday. At present, the driver is being treated for burns to both hands and his left leg.

The last fatal incident to shake the Formula series community took place in August 2019, when Formula 2 racer Anthoine Hubert died during a crash at the Spa-Francorchamps circuit.