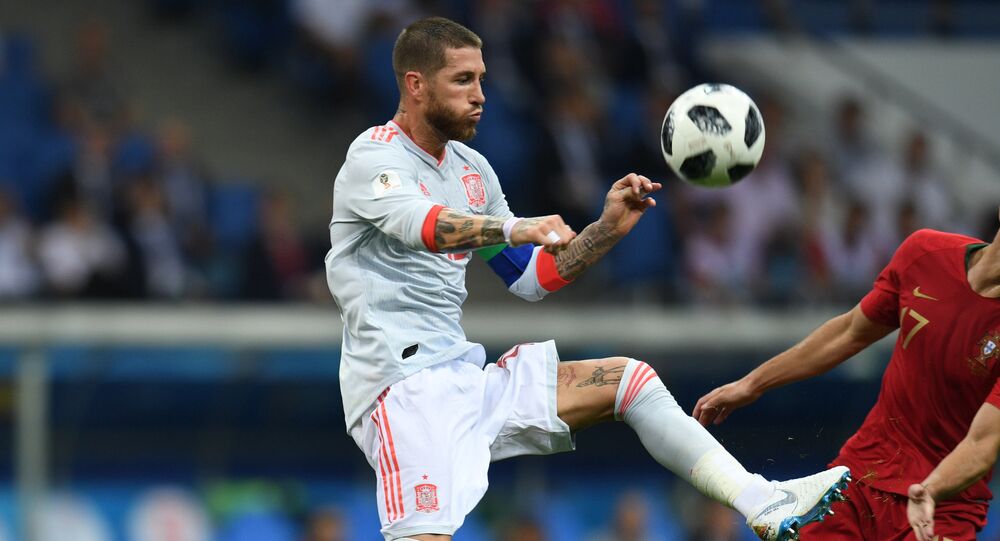 The club from the Spanish capital and the Catalonian squad are clashing in Barcelona on Wednesday. Ahead of the La Liga match, a street artist painted what looks like an homage to a famous graffiti on the Berlin Wall along one of the streets in the city, calling for the country’s government and the autonomous community to make up.

The graffiti, showing Real Madrid’s captain Sergio Ramos and FC Barcelona’s defender Gerard Pique making out, has prompted debate on social media. According to the Spanish sports outlet AS, the point of the work by street artist Tvboy in Barcelona, who painted the two football stars along with a heart and the caption “Kiss and Talk” in Barcelona – where the two teams will meet on Wednesday, is to urge the two parties in the row over the Catalonian independence to engage in dialogue.

The picture depicts rivals Gerard Piqué and Sergio Ramos kissing, and has been entitled 'Spain, kiss and talk' in a plea for dialogue rather than disharmony amid potentially ugly scenes due to protests.#TsunamiDemocràtic #ElClasico pic.twitter.com/pjdydIZx7o

​Some praised the message and the format on Twitter, saying that one should enjoy football and put differences aside.

"Kiss and Talk." Wonderful graffiti in Barcelona showing Sergio Ramos and Gerard Pique with some love at the time of political unrest. Time to enjoy El Clásico and put our differences aside! ❤️ @SergioRamos @3gerardpique @realmadrid @FCBarcelona #ElClasico pic.twitter.com/e7XLDYMtIf

​The graffiti of the two footballers kissing brought others to laughter.

El Clasico really is taking on a new meaning this year: https://t.co/ekEBKcENMd

​Some seemed rather sceptical about the creation.

El clásico has become el político and still uncertain how everything will go down tomorrow with the demonstrations planned ahead of Barça-Madrid. A kiss between Gerard Piqué and Sergio Ramos is of course one way to deal with it.... pic.twitter.com/i66bDxa30C

A kiss for peace. #Graffiti De un beso between two rebels with a cause on and off the pitch. #ElClasico Gerard Pique likes to comment on political events and Sergio Ramos stands out for saying what he thinks. FYI, not the first kiss either. Remember #Messi & #Ronaldo @TVBoy pic.twitter.com/T0VXPaFUt3

​This is not the first time that Tvboy used this motif for his work. He earlier painted Barcelona’s Lionel Messi and the former star of Real Madrid, Cristiano Ronaldo, kissing as well.

© AP Photo / Emilio Morenatti
Catalan Independence Supporters Stage Protest Ahead of Real Madrid-Barcelona Match - Video
This time, La Liga’s match between the two leaders in the standings, held at the Camp Nou Stadium in Barcelona, is being accompanied by protests for Catalonia's sovereignty from Spain. Protesters have gathered outside the arena ahead of the face-off.

Violent rallies have rocked the region since 14 October, sparked by the Spanish Supreme Court's ruling to hand nine Catalan independence leaders lengthy prison terms. Hundreds of people have been arrested and injured in the unrest, including police officers.