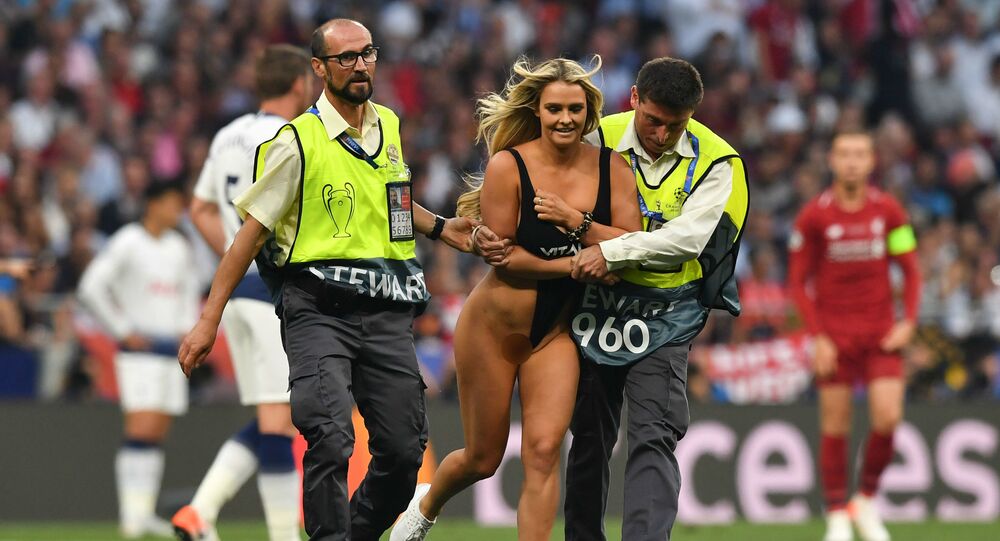 After the extravagant skimpy swimsuit run, Kinsey Wolanski was slapped with two fines simultaneously – one over violating the football governing body's rules, and the other for unlawful promotion.

US model Kinsey Wolanski, the notorious bombshell pitch invader who interrupted last week’s UEFA Champions League final between Liverpool and Tottenham Hotspur in Madrid, has shared in a video published by her boyfriend blogger Vitaly Zdorovetskiy on YouTube how she got undressed in a matter of seconds before her spicy stunt.

The clip features Wolanski demonstrating a dress that can be taken off at the wave of the hand, leaving the model in a swimsuit, in which she ran unhindered onto the pitch.

The Liverpool-Tottenham match took place on 1 June and ended 2-0, with Merseysiders grabbing the win.

The scantily-dressed blonde model  ran onto the field during the first half of the game, causing match officials to pause the game for several minutes and subsequently fine the woman €15,000 ($17,000) for non-compliance with the football organisation’s guidelines.

Wolanski was also charged an additional €10,000 fine for promoting the YouTube channel of her boyfriend, a Russian-American prankster whose name was written on Wolanski’s revealing swimsuit.

“Vitaly Uncensored” was the logo emblazoned on her tight-fitting outfit that she wore during the unusual event, which incidentally appeared to yield a profit for the model, as Wolanski’s fan base on Instagram swelled by well over a million new subscribers over the first hours after her pitch appearance. However, some time later, her account appeared to be hacked, with anyone attempting to check out the 22-year-old blonde stunner’s snaps being met with the automatic message: "This photo or video has been removed from Instagram." Wolanski subsequently confirmed the Instagram account hack on Twitter.