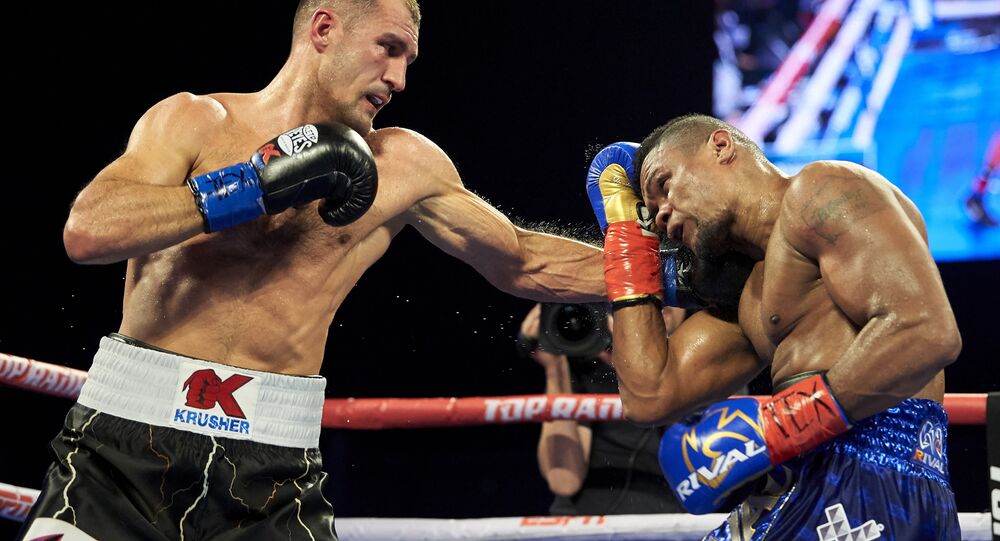 Come to My Back Yarde: Will Unbeaten UK Fighter Take on Krusher in Russia?

Tyson Fury and Anthony Joshua might be the biggest names in British boxing but a new star is rising and Anthony Yarde could be a household name by this time next year. Sputnik looks at the Russian champion standing in his way.

Yarde, 27, knocked out American Travis Reeves in the fifth round of his most recent fight — his 18th victory, none of which have lasted more than seven rounds.

His manager Tunde Ajayi has been accused of avoiding tough opponents and just piling up bodies on his record.

Anthony Yarde: "Nobody was interviewing you! I was just giving you a preview of how much he likes the camera!" 😂

​But the reality is that few British, European or American fighters have fancied taking him on the big punching Londoner, nicknamed The Beast.

That may be about to change if Yarde is prepared to do something no British professional boxer has ever done before — fight in Russia for a world title.

The exact date has not been fixed but the venue is set to be in Kovalev's home town of Chelyabinsk.

"Right now the plans are to have the fight in Russia. Frank (Warren, Yarde's British promoter) and Yarde have already agreed to terms. We're getting an appropriated date in June or July for the fight, but everything is a go," said Arum, who has run Top Rank since the 1970s.

🤔 How far into enemy territory do you believe Anthony Yarde should be prepared to travel in order to challenge Sergey Kovalev for his WBO light-heavyweight title? #LazySundayBoxingPoll

​"I think it can happen this year. I was offered the Kovalev fight in 2018 but my manager and promoter agreed it wasn't the right time for me to be challenging for a world title then. I needed a few more tune-up fights, learning fights, and I'm fine with that," Yarde told the Badlefthook website.

Kovalev, who is now 36, was seen as a terrifying and unstoppable fighter up until November 2016 when he ran into American light heavy champ Andre Ward.

Ward beat him on points and then stopped him in the rematch the following year.

A post shared by AnthonyYarde||BeastFromTheEast (@mranthonyyarde) on Apr 7, 2019 at 11:53am PDT

The Kovalev bandwagon was well and truly derailed but he dusted himself off and regained the WBO light heavy title by knocking out Ukrainian Vyacheslav Shabranskyy.

The Russian won the rematch in February this year but his chin is clearly suspect and Yarde could become champion if he can connect with one of his big shots.