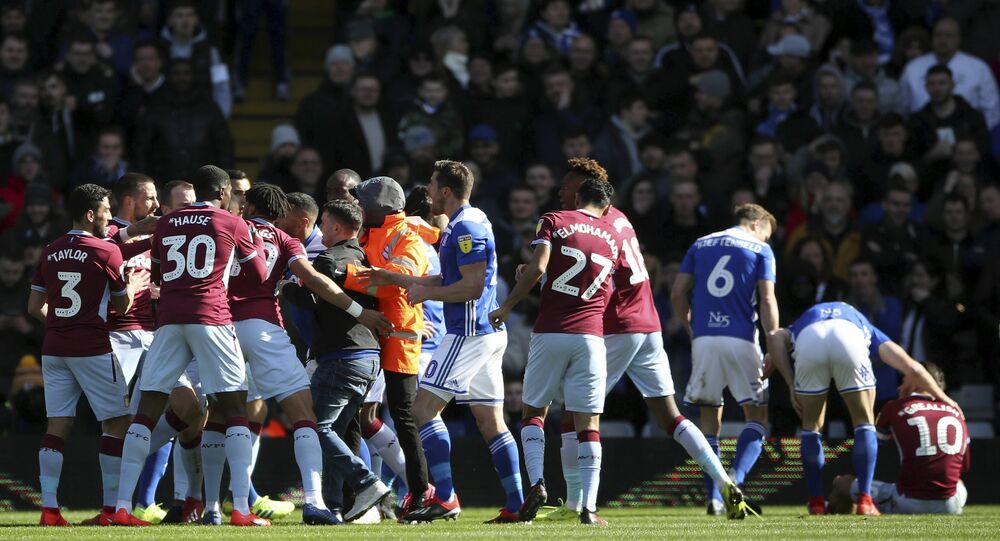 When Watching is Not Enough: Sports Fans Who Just Had to Join in the Action

A football fan was jailed on Monday for punching a player during the Second City derby in Birmingham on Sunday, a match watched by millions on live TV. Sputnik looks at those moments when spectators just lose their heads.

A Birmingham City fan was jailed for 14 weeks on Monday, 11 March, for running onto the pitch at St Andrew's and attacking Jack Grealish, captain of City's arch-rivals Aston Villa.

Paul Mitchell, 27, told Birmingham magistrates he was not drunk and had decided to go onto the pitch to stir up the home supporters.

Grealish later went on to score the only goal of the match as Villa beat City 1-0.

On the same day an Arsenal fan shoved Manchester United's Chris Smalling on the pitch during their game at the Emirates Stadium in London and was arrested.

"There's no evidence here of any return to the dark days of football hooliganism," Professor Clifford Stott, from Keele University, told Sputnik.

But football is not the only sport or occasion which has seen spectators unable to control the urge to get involved.

In January 1982 England were hosting Australia in a high profile rugby match at Twickenham stadium in London.

It was half time and England were winning 6-3 when a young lady with 42FF breasts, decided to entertain the largely male crowd of 60,000.

Erica Roe, 25, stripped off, stepped out of the crowd and showed off her considerable assets before running onto the pitch before she was stopped by two police officers and England's elderly and eccentric mascot Ken Bailey.

England captain Bill Beaumont was giving his half time team talk to his players on the pitch at the time.

"I was trying to get through to the boys — but most of them seemed to be gazing over my shoulder," recalled later.

England won the match 15-11 but the sight of Erica stayed far longer in the memory.

The epidemic of football violence in Britain had mostly disappeared by the mid 1990s and the fences around pitches had been taken down after the Hillsborough tragedy in 1989.

Fans would sometimes come onto the pitch at the end of games when they could not contain their joy after their team won a big match or gained promotion.

Brighton and Hove Albion fans, furious at the way their club was being run into the ground by owner Bill Archer and his sidekick, former Liberal Democrat MP David Bellotti, invaded the pitch at the Goldstone Ground in the 16th minute, with the game goalless.

Chanting "Sack the board!" they refused to leave the pitch and broke both goalposts to make sure the game did not finish.

It was part of a campaign to draw the club's plight to the attention of the Football Association.

The game was later replayed behind closed doors and Archer and Bellotti were eventually ousted.

Nowadays Brighton is an English Premier League club but the Goldstone has long since been demolished and they play their home games at the Amex Stadium.

In the spring of 1993 Monica Seles, from what was then still Yugoslavia, was the world number one in women's tennis.

The 16-year-old had burst onto the scene in 1990, winning the French Open against the previously dominant Steffi Graf.

On 30 April 1993 Seles was playing Bulgaria's Magdalena Maleeva in the Citizen Cup tournament in Germany.

She was 4-3 up in the second set when Gunter Parche, an unemployed 38-year-old, leaned out of the crowd and stabbed Seles in the back with a nine-inch blade.

"My head whipped around towards where it hurt and I saw a man wearing a baseball cap, a sneer across his face. His arms were raised above his head and his hands were clutching a long knife. He started to lunge at me again," Seles wrote in her autobiography.

Parche, who was acting out of a warped devotion to his idol Steffi Graf, was found to be mentally ill and was jailed for only two years.

Graf made her comeback in 1995 and won another Grand Slam — the 1996 Australian Open — but she never regained her earlier dominance.

In the early 1990s Evander "The Real Deal" Holyfield and Riddick "Big Daddy" Bowe were two of the biggest names in heavyweight boxing.

In 1992 Bowe beat Holyfield to win the WBA, WBC and IBF titles but agreed to a rematch in November 1993 in an outdoor arena at Caesars Palace in Las Vegas.

Fans could not believe their eyes in the seventh round.

Prankster parachutist James Miller skydived into the ring and got tangled up in the ring ropes.

Miller, who was notorious for these sort of stunts, was beaten unconscious by members of Bowe's entourage.

"It was a heavyweight fight and I was the only guy who got knocked out," he later joked.

Miller committed suicide in the Alaska wilderness in 2003.

Holyfield went on to win the fight on points, although Bowe completed the trilogy by knocking The Real Deal out in 1995.

Greek football matches can be fairly highly strung and dramatic but things got totally out of hand when PAOK Salonika played AEK Athens on 11 March 2018.

PAOK's Fernando Varela appeared to have broken the deadlock with a header in the 90th minute but the referee disallowed the goal for offside.

The 59-year-old took off his coat, revealing what appeared to be a pistol in a holster on his hip.

The match had to be suspended and was later declared a draw, while referee Giorgios Kominis said Savvidis threatened him.

Savvidis did have a firearms licence but even police officers on duty are not allowed to carry guns inside football stadiums in Greece.

In May AEK won the championship, ending the season six points clear of PAOK.

Riddick Bowe (yes, him again) was a magnet for controversy and was known to surround himself with thuggish hangers on from his native Brooklyn, New York.

And they were to disgrace the sport of boxing on 11 July 1986 when Bowe took on the undefeated Chicago-based Pole, Andrew Golota.

Bowe had not trained properly for the fight and was out of shape and losing on points.

But instead of cruising to victory Golota shot himself in the foot by persistently punching Bowe below the belt.

Golota was docked a point in the third round and again in the sixth and was warned that another low blow would lead to his disqualification.

Sure enough, in the seventh, he punched low and the fight was called off.

Bowe's entourage them poured into the ring and began to attack Golota.

Jason Harris began hitting Golota in the head with a walkie-talkie, opening up a cut that would require 11 stitches.

Fans of Golota and Bowe began trading punches inside and outside the ring and eventually 10 people were arrested and nine spectators taken to hospital.

Bowe won a rematch in December 1996 when (you guessed it) Golota was disqualified for low blows.

Golota was knocked out by Lennox Lewis when he challenged for the heavyweight title again in 1997 but he only retired from boxing for good in 2013.

One of the most horrific riots ever seen in a football stadium took place on 1 February 2012 in Egypt.

The game was taking place in Port Said and the home team, al-Masry were beating al-Ahly from Cairo, 3-1.

Al-Masry fans came onto the pitch and attacked visiting players and fans.

With security forces apparently unwilling to get involved, the riot burst out of control and led to the deaths of 74 spectators, with another 500 injured.

Seventy-three people, including nine police officers and two officials from al-Masry were charged in the aftermath of the riots and 10 fans were sentenced to death.

The riot came a year after the fall of President Hosni Mubarak and some al-Ahly fans claimed they were targeted by elements within the Egyptian deep state because they had been calling for the Supreme Council of the Armed Forces to hand over power.