Russia’s newest star on the ice fearlessly pulls off multiple, consecutive triple and quadruple jumps, some of which have never been performed by her peers, or even by experienced athletes. Her flawless technique and daring jumps have conquered the hearts and minds of many judges.

The 14-year-old Russian skater Alexandra Trusova set a new world record at the recent ISU Junior Grand Prix (JGP) in Lithuania by earning 74.74 points in the short program. This bested the previous record held by another young Russian skating star Shcherbakova, by 1.56 points. Sputnik has gathered the details about Trusova's young skating career.

One of the key features of Trusova's performances is the abundance of sophisticated triple and quadruple jumps, which she often executes in complicated combinations. She pulled off her first successful triple jump at age 11. Two years later she mastered the Salchow. In 2018 she became the second woman in the world to perform a quad version of it. 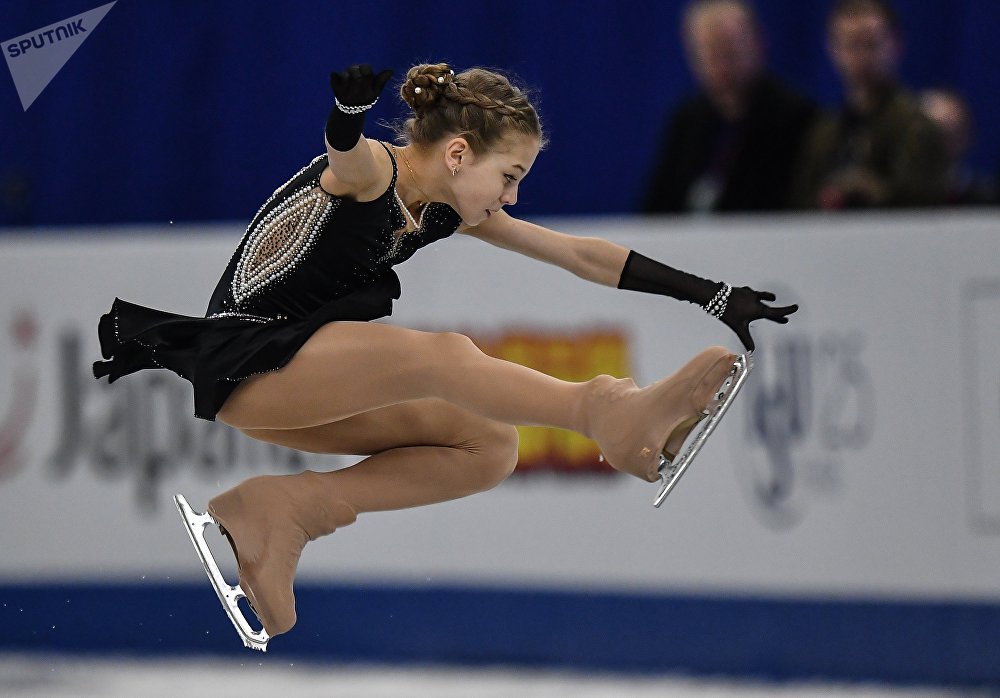 In one of her training sessions for the 2017-2018 JGP Trusova managed to perform six consecutive triple jumps. After she handily won the championship, the only thing she was upset about was that she didn't perform the quad Salchow.

The star skater explains that her coaches always ask for more jumps and so she practices them a lot. She tries to look directly into the eyes of the jury prior to performing her most difficult and impressive tricks so that they never miss any detail of her perfectly executed jumps.

The top score for a short program among women is not the only record Trusova currently holds. She was the first woman (both among her peers and more experienced skaters) to pull off a quad toe loop, two quads in a free skating program and two different quadruple jumps in a program. She is also known for highly complicated combinations, things often not dared by other skaters, such as consecutive triple Salchows, loops and toe loops.

Trusova earned a technical score of 92.35 in the free skate for her outstanding performance, which is a world record for women's singles (even for older skaters). She also holds the top scores for junior-level short and free skating programs and total score at the World Junior Figure Skating Championships.

How She Became Interested in Skating and What She Plans Next

Trusova was born into a family of athletes. Her father was a master of sports in several martial arts and her mother was a track and field star. Early on Alexandra liked roller skating, but after she witnessed the performance by Russian skater Lipnitskaya at the Sochi Olympics she dreamed of reaching the same heights. After changing several coaches she ended up with Eteri Tutberidze, a coach to many famous young Russian skaters, including Evgenia Medvedeva.

Even after winning several skating championships, Trusova is still considering other options for her future. She is particularly interested in working with animals, while at the same time she strives to be the first to break new ground in skating and wants to pull off quads in all types of jumps.