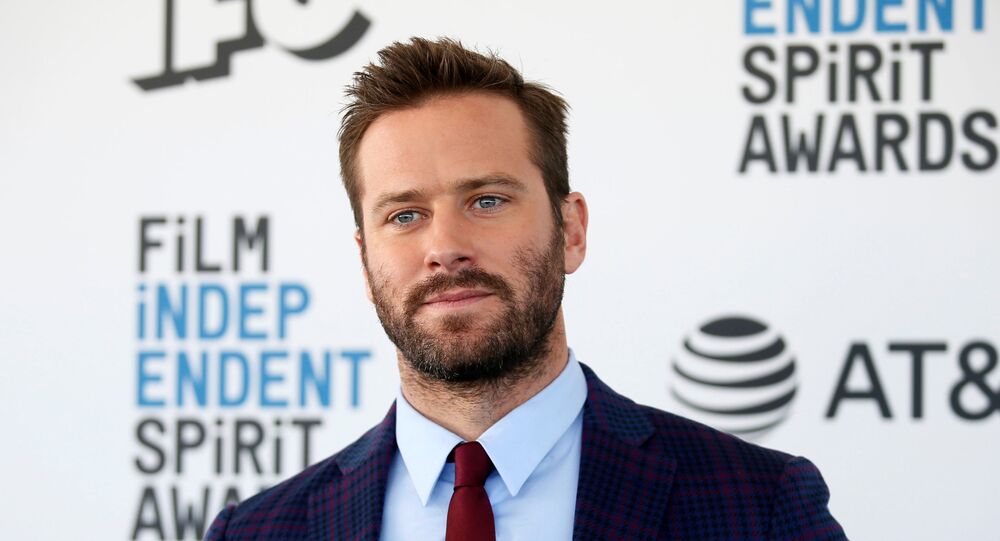 ‘The Social Network’ star Armie Hammer has been involved in a ‘cannibalism’ row after an anonymous Instagram account shared a series of messages allegedly from the actor which suggested that he was fantasising about eating parts of female bodies and drinking women's blood. Hammer denied all the allegations.

The probe was reportedly opened when the police were contacted by the attorney of an alleged victim on 3 February, according to the New York Times and CNN. After speaking to the accuser, the department’s Special Assault Section launched an investigation into Hammer, Los Angeles police spokeswoman Norma Eisenman confirmed on Thursday.

The probe was revealed after an accuser, a 24-year-old woman identified as Effie, came forward during an online news conference on Thursday to claim that Hammer “violently raped” her for “four hours” on 24 April 2017. The alleged encounter took place in Los Angeles; the couple is said to have been in an on-and-off relationship between 2016 and 2020 after meeting on Facebook, when the woman was 20 years old.

Effie, who spoke alongside women’s rights attorney Gloria Allred, who organised the conference, said that during their relationship, the actor had “mentally, emotionally and sexually” abused her but the things got out of hand on the day of the alleged rape.

“During those four hours, I tried to get away but he wouldn't let me. I thought he was going to kill me,” the Europe-based woman unveiled while sobbing.

She claims that Hammer has repeatedly slammed her head against the wall during the act and “committed other acts of violence” to which she didn’t consent, including beating her feet with a crop, which left her unable to walk without pain for the next week.

Effie said that the developments left her suicidal and completely “in shock” as she apparently couldn’t believe that someone she “loved did that” to her but tried to justify his actions as a “twisted form of love”.

© REUTERS / Courtesy of Gloria Allred
A woman who identified herself only as Effie stands next to U.S. actor Armie Hammer, who she accused on March 18, 2021 of raping her in 2017, in an undated photograph. Hammer's lawyer called the allegation "outrageous" and said that all the actor's sexual relationships were "completely consensual." Courtesy of Gloria Allred/Handout via REUTERS

Hammer’s attorney Andrew Brettler has denied the allegations as “outrageous” maintaining that the actor’s interactions will all his partners “have been completely consensual, discussed and agreed upon in advance, and mutually participatory." Hammer’s conversation with Effie proves this, the lawyer insists.

"As recently as July 18, 2020, [Effie] sent graphic texts to Mr. Hammer telling him what she wanted him to do to her. Mr. Hammer responded making it clear that he did not want to maintain that type of relationship with her,” Brettler said in a statement sent to the media.

The attorney argued that “it was never Mr. Hammer's intention to embarrass or expose” the woman’s “fetishes or kinky sexual desires” but things have now escalated. Brettler accompanied his statement by an alleged screenshot of conversation between Hammer and Effie.

The woman is the latest person to speak against 34-year-old Hammer, who had been married to TV star Elizabeth Chambers from 2010 to 2020.

The “Call Me By Your Name” star was also accused by his ex-girlfriend Courtney Vucekovich of being emotionally abusive and expressing desire to “barbecue and eat” her on one occasion. Another person, Paige Lorenze, said that the actor wanted to bruise her as a kind of “branding” technique for other people to see it.

The women came forward with their accounts of sexual experiences with Hammer after an anonymous Instagram account “House of Effie” shared screenshots of alleged DMs from the actor to other females suggesting that he was into cannibalism fantasies and sexual abuse, as well as blood-drinking and finger-cutting fetishes. It’s unclear whether the Instagram account has anything to do with the new accuser.

The actor responded to accusations in January insisting that all his extramarital affairs were “completely consensual”.