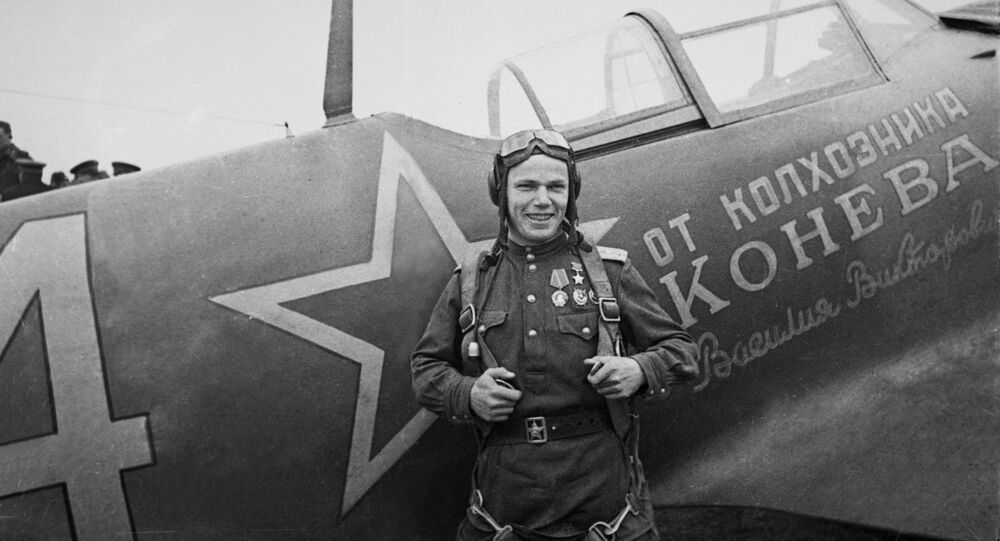 During the Second World War, renowned Soviet ace Ivan Kozhedub shot down a total of 64 enemy planes, setting a personal record for the number of air victories among all pilots from the countries of the anti-Hitler coalition.

Monday marks the centenary of famous WWII ace Ivan Kozhedub, the three-time Hero of the Soviet Union, who took part in 120 dog fights and was especially known for doing his best to save his plane during air battles.

The most successful Allied fighter pilot of the Second World War, Kozhedub managed to shoot down a total of 64 Luftwaffe aircraft, including Ju-87 and He-111 bombers, as well as Fw-190 and Bf-109 fighters, plus even one of the world's first operational jet-powered fighter aircraft, the Me-262.

Actually, the number of Kozhedub’s air victories amounts to 66, given that the Soviet aсe downed two Allied fighters, the US-made P-51 Mustangs, during the Battle of Berlin in April 1945, an incident that was then understandably hushed up.

In any case, it was the American pilots who were to blame because they apparently mistook Kozhedub’s La-7 for an enemy plane, according to Russian historian Nikolai Bodrikhin.

He said that the dog fight took place after the Soviet ace suddenly encountered an American B-17 and its escorting P-51 Mustang fighters, which, were however, considerably lagging behind the US bomber.

But the main trouble was that the B-17 was being shadowed by Nazi fighters, which prompted Kozhedub not to think twice before opening fire at the enemy warplanes.

“After Ivan scared away the enemy fighters with a machine gun burst, the Americans started to fire at Kozhedub’s plane, apparently thinking that they were targeting a Nazi fighter. ‘Who are you firing at? Me?’, the Soviet ace thought to himself and immediately opened fire at the P-51s”, Bodrikhin said.

The first Mustang exploded in the air, while the second fighter made an emergency landing on Soviet territory, the historian added.

Interestingly enough, a pilot from that P-51 plane reportedly said afterwards that he was really sure that it was the German who shot him down.

It is safe to assume that the incident certainly was an episode in Kozhedub’s renowned record of 330 sorties and 64 air victories which added to the defeat of Nazi Germany in World War Two.

Historian on VE Day: People ‘Ought to Remember’ the Brave Men Who Fought in WWII