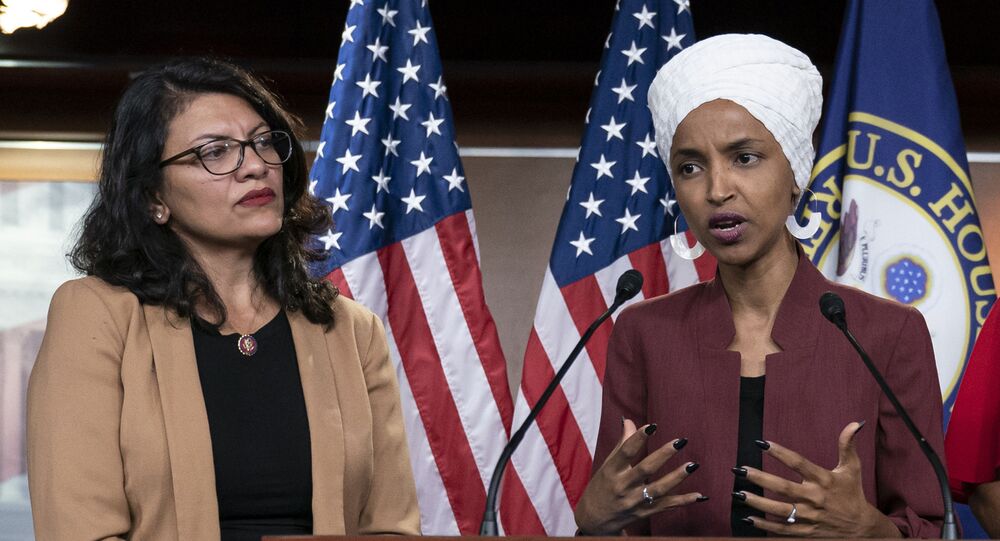 US Reps. Rashida Tlaib (D-MI) and Ilhan Omar (D-MN) held their first press conference on Monday after the move by the Israeli government to bar the pair from traveling to the West Bank and meeting with Palestinians.

Moments into the presser, Omar went in headfirst, suggesting that Israel’s denial of entry was “nothing less than an attempt by an ally of the United States to suppress [Omar and Tlaib’s] ability to do our jobs as elected officials.”

“But this is not just about me. [Israeli Prime Minister Benjamin] Netanyahu’s decision to deny us entry might be unprecedented for members of Congress, but it is the policy of his government when it comes to Palestinians,” she told the room of reporters.

“This is the policy of his government when it comes to anyone who holds views that threatens the occupation - a policy that has been edged on and supported by [US President Donald] Trump’s administration. That's because the only way to preserve unjust policy is to suppress people’s freedom of expression, freedom of association and freedom of movement.”

“We must be asking - as Israel’s ally - that the Netanyahu government stop the expansion of settlements on Palestinians lands, and ensure full rights for Palestinians if we are to give them aid.”

“We cannot let Trump and Netanyahu hide the cruel reality of the occupation from us … The occupation is real. Barring members of Congress from seeing it does not make it go away,” she concluded before handing the microphone to fellow congresswoman Tlaib.

Recalling her youth spent in Palestine, Tlaib spoke on difficult times in which her extended family in Palestine endured grueling checkpoints and questioning by Israeli security forces.

“As a young girl visiting Palestine to see my grandparents and extended family, I watched as my mother had to go through dehumanizing checkpoints,” a tearful Tlaib said, before recounting several scarring moments she experienced during her time in Palestine. “I remember visiting East Jerusalem with my then-husband and him being escorted off the bus, although he was a United States citizen, just so security forces could harass him.”

The presser comes after Tlaib announced Friday that despite the Israeli government going back on its decision to bar her entirely, she would not be visiting her West Bank-based grandmother as a result of what she called “oppressive conditions” having been placed on her trip.

The Friday announcement came on the heels of Trump egging Israeli officials on to block the visit of the two Muslim congresswomen, tweeting on Thursday that it would “show great weakness if Israel allowed Rep. Omar and Rep. Tlaib to visit.”

​“Our delegation trip included meetings with Israeli veterans who were forced to participate in military occupations … They also desperately want peace and self-determination for their Palestinian neighbors,” Tlaib said at the Monday conference. “The delegation would have seen first hand why walls are destructive, not productive. They could have asked the people in Bethlehem how walls cut people off from economic opportunity … and cause psychological damage.”

Omar and Tlaib’s trip to Israel, which was due to start Sunday and run until August 21, would have included visits to occupied Palestinian territories and meetings with various activists on the ground.